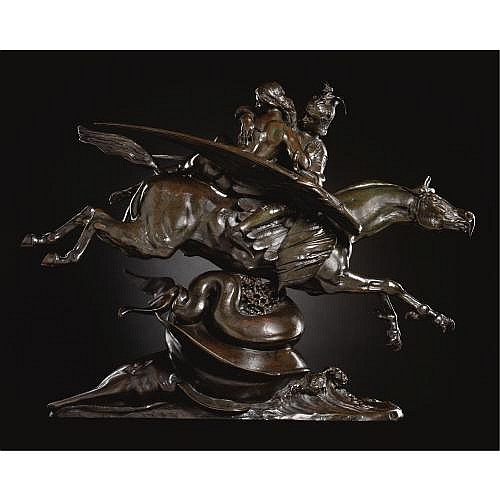 When M. A. Mazuy published his French translation of Ludovico Ariosto?s Orlando Furioso the epic poem was already a popular subject in the Paris Salon. Filled with action and fantasy the story combined the concerns of the Renaissance Revival and Romanticism. Barye produced his version of the episode of the knight-errant Roger delivering the maiden Angelica as the centrepiece of his garniture de chiminée commissioned by the duc de Montpensier at the start of the 1840?s. Montpensier was moved to request the garniture after being greatly impressed by Barye?s surtout de table made for his younger brother, the duc d?Orléans. According to Gustave Planche the choice of subject was left to the sculptor and the result may justly be called Barye?s greatest narrative masterpiece.

Rising in an arc above the triangular base of the orc or seamonster, Roger and Angelica escape upon a magical steed. The sculpture illustrates a verse from Canto X of Ariosto?s poem.

The hippogriff, responding to the spur,
Braces its hoofs and rises in the air;
Away Ruggiero pillion carries her,
Depriving thus the monster of its fare.
It was, indeed, no fitting connoisseur
For this bonne bouche, so delicate and rare.
He looks behind and thinks he can surmise
A thousand kisses promised in her eyes.
Ludovico Ariosto, Orlando Furioso, Canto X, Verse 112

In the swirl of the composition Barye expertly represents several moments in the thread of the narrative. The defeated orc, Ariosto?s ?writhing, twisting mass,? is surmounted by the victorious Roger, and used as a device to powerfully lift the hippogriff into the air, leaving behind the waves which rise and foam around the base. The immediacy of Angelica?s rescue is seen as she tries to steady herself on the hippogriff, clinging to Roger. Roger?s own intentions as he holds Angelica are turned from chivalrous to amorous. She turns her head away and her right hand, placed over Roger?s heart, bears the magic ring which she later uses to disappear and escape his advances.

The details in this fine cast are no less skilful than the consummate account of the narrative. Barye clearly enjoyed creating the illusion of different materials out of his alchemical bronze. The contact of contrasting textures creates a frisson as the cold metal of Roger?s armour breaks through the feathered wings of the hippogriff and presses against Angelica?s flesh.

Barye incorporates a myriad of fanciful details including the griffin surmounting Roger?s helmet, the octopus at the base and the whimsical squiggle of the orc?s tail. Amidst the fantasy Barye does not lose sight of his anatomical concerns and his chimerical hippogriff?s horse?s body is carefully described with veins and muscles carefully delineated. These details are brought to life by a fine web of surface chasing and a delicate patina which includes the warm red-brown of Angelica?s back and the green tone across the hippogriff?s neck.

The model was edited in two versions which Poletti & Richarme consider to be contemporaneous. The other version had an opened-beaked hippogriff. Less than twenty casts of the model were produced. These rare bronzes were already highly prized in the 19υth Century. George A Lucas, the American agent for Henry Walters, bought a cast from Hector Brame in 1884 for 3,700 francs. The importance of the model was emphasised by the poet and critic Gustave Planche who called it ?the most important work in modern art? combining ?the genius of Ariosto, Italy?s first poet after Dante, with the intelligence of Barye, the French sculptor.?

Casts of the model are held in the collections of the Walters Art Gallery, Baltimore, the Los Angeles County Museum and the Metropolitan Museum of Art, New York.