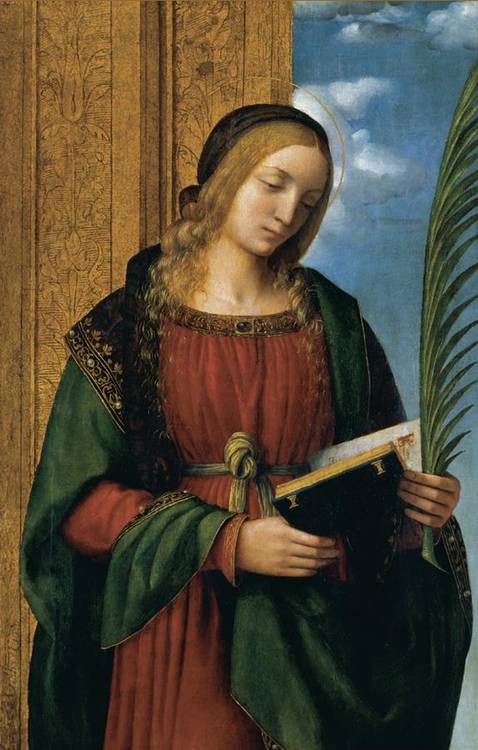 This panel, which has probably been reduced in height and would originally have shown a full-length figure, once formed part of a larger altarpiece from which three other fragments survive (see Ottino della Chiesa, under Literature, plates 23-5). The other three panels also show saints against a similar gold damask background and the orientation of the figure of this female martyr suggests that she once stood at the left of the composition. The three other panels represent St. Anthony of Padua (Museo Poldi Pezzoli, Milan), St. Bernardino of Siena and St. Catherine of Siena (both in the Chiesa di Magadino in Canton Ticino). This grouping of saints strongly suggests that the original altarpiece was commissioned for an Observant Franciscan house, possibly a nunnery.

The Female martyr was first published by Cook in 1903 as by Bernardino Luini, and it had been exhibited as such the year before. Subsequently Berenson and others (Venturi, Frizzoni) published this and the other related panels as by Cavazzola, but it was not until Ottino della Chiesa's monograph on Luini that they were all convincingly attributed to the artist. The paintings appear to be youthful works by Luini, probably executed around the time of his first known work, the altarpiece in the church of Maggianico in Como, painted shortly after 1510.