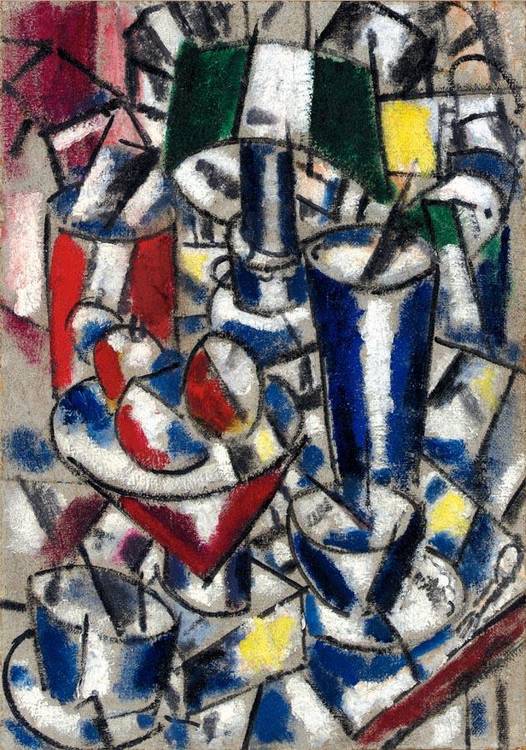 signed F. LÉGER and dated 1914 on the reverse

Painted in 1914, Nature morte à lampe is a vivid example from Léger's series of Contrastes de formes, the supremely-abstracted Cubists compositions that he executed in 1913 and 1914 (figs. 1-3). These works, which were composed of boldly outlined, overlapping shapes and coloured with strong tones of reds, blues, yellows and greens, were some of the most innovative and intellectually sophisticated productions of the Cubist movement. Léger's compositions present the viewer with a multiplicity of views of single images, such as a cone or sphere, represented over time and throughout space. Picasso and Braque had originally pioneered the idea for this aesthetic in the early 1900s with their Analytic Cubism, around the same time that Albert Einstein proposed his theory of relativity in 1907. While artists and intellectuals throughout Europe were fascinated by this daring, new visualisation of space and time, Léger was one of the few to harness its expressive potential. Among the most innovative aspects of Léger's style was his ability to create complex compositions from a limited range of forms, an accomplishment that was completely new to the realm of Modern painting.

Léger described this new development in his painting at a lecture at Marie Wassilief's Académie in May 1913. 'The realistic value of a work of art is completely independent of any imitative character,' he explained. 'This truth should be accepted as dogma and made axiomatic in the general understanding of painting [...] Pictorial realism is the simultaneous ordering of three great plastic components: Lines, Forms and Colours [...] the modern concept is not a reaction against the impressionists' idea but is, on the contrary, a further development and expansion of their aims through the use of methods they neglected [...] Present-day life, more fragmented and faster moving than life in previous eras, has had to accept as its means of expression an art of dynamic divisionism; and the sentimental side, the expression of the subject (in the sense of popular expression), has reached a critical moment [...] The modern conception is not simply a passing abstraction, valid only for a few initiates; it is the total expression of a new generation whose needs it shares and whose aspirations it answers' (quoted in Dorothy Kosinski (ed.), Fernand Léger, 1911-1924, The Rhythm of Modern Life, Munich and New York, 1994, pp. 66-67).

Léger painted Nature morte à la lampe in 1914, shortly before he was mobilised into battle. The Great War restricted Léger's activity for the next three years, and this picture exemplifies the Contraste de formes series at its final and most developed phase. The still-life is composed of an assortment of shapes, mostly cylinders, cones and spheres, which form highly stylised presentations of everyday objects. Cups and saucers, a bowl of fruit, a spoon and several other objects are visible on a tabletop, rendered with a skewed perspective which makes them look as if piled on top of each other, dominated by a lamp that raises above a pyramid of objects. With their cylindrical, highly geometricised shape, these everyday household items resemble machine parts. Throughout his Contraste de formes series, Léger subjected human figures, objects and pieces of architecture to the same principle of this mechanised aesthetic, an aesthetic that was to become one of the most important and revolutionary characteristics of modern art.

With his Contrastes des formes, Léger was one of the first artists of the 20th century to extol the beauty of geometry without having to assign it a context. He was undecided, however, on just how much his compositions should refer back to the material world, and that contradiction is inherent in the present painting. As Douglas Cooper and Gary Tinterow discussed, 'The idea of a 'pure art,' devoid of objective representation, was hotly discussed by artists and writers in Paris in 1912-13. Apollinaire announced the death of 'the subject' in 1912. It was already implicit in late Symbolist theory, virtually explicitly in Picasso's painting of the summer of 1910, and widespread by the end of 1913. Painters with temperaments and expressive aims as diverse as those of Kupka, Mondrian, Delaunay, Kandinsky and of course Léger himself had made non-objective paintings before the end of that year. Of these painters, Léger was the exception in that he rejected it almost as quickly as he took it up; the rest continued their explorations and prepared the way for the abstract art which has prevailed during much of this century. For Léger, however, art was almost always an expression of the material reality of life, and in this sense he remained in harmony with the essential realism of Cubism' (D. Cooper and G. Tinterow, The Essential Cubism, Braque, Picasso & Their Friends, 1907-1920 (exhibition catalogue), Tate Gallery, London, 1983, p. 214).