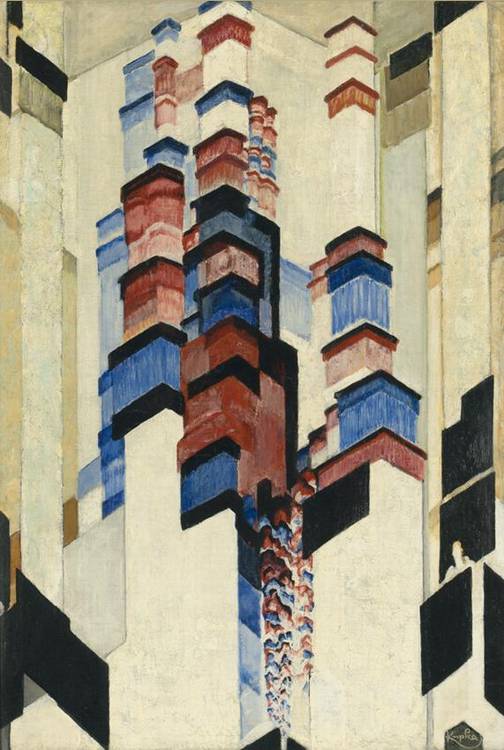 Together with Malevich and Kandinsky, Kupka was one of the fathers of abstract art, and a major proponent of modernism in his native Czechoslovakia. He considered himself a 'colour symphonist', and set out to express his inner states through the harmonies and rhythms produced solely through colour and line. This work is the second in the series of three paintings titled Le Jaillissement I-III executed in 1922-23, based on vertical lines and geometrical shapes, reflecting Kupka's tendency towards architectural composition. The painting is dominated by dynamic vertical lines creating a sense of sharp upward movement, accentuated by the elongated vertical shape of the canvas. The dynamic effect is further reinforced by a new colour scheme - the artist has abandoned his earlier rich and vibrant colours for a palette dominated by primary blue and red tones set against the black and white background.

While Le Jaillissement I (fig. 1) retains the more organic, undulating shapes characteristic of Kupka's earlier work, the present painting demonstrates his shift towards the sharper, more angular forms of his mechanical paintings. Clearly inspired by the dynamic forms and breath-taking scale of modern architecture, the present work reflects Kupka's recurrent fascination with Gothic cathedrals, which is highlighted here by the stained glass effect of the geometrical planes of blue and red framed in black outlines.

In her discussion of Kupka's 'upward' paintings, Ludmila Vachtová wrote: 'As the circle symbolized a complete cycle to Kupka even before he began to think of abstract paintings, so the vertical had the symbolic meaning of reaching out for 'luminous heights' [...] Kupka himself was mainly interested in historic architecture. Apart from his thorough study of archaeology, he had also filled his sketchbooks with drawings of Greek temples which, like Gothic cathedrals, he admired as perfect architecture. This admiration emerged in some of his pictures which are reduced to the form of the basic relation of the upward thrust and the weight of the mass, or to a harmonious contrast between the material and the immaterial' (L. Vachtová, op. cit., pp. 102, 113 & 125).