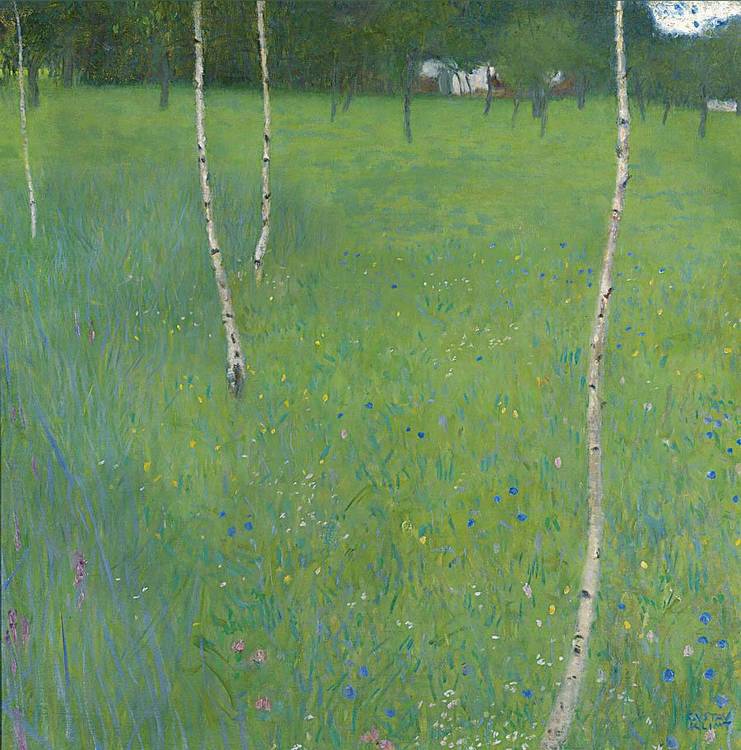 PROPERTY FROM THE COLLECTION OF HERMINE LASUS, VIENNA

Having begun his artistic career as a figure painter and portraitist, Klimt only turned to the subject of landscape around 1898. The present work belongs to an important group of his early landscapes, most of which were executed during the summers he spent in the country. He would often install himself in the woods, where he would find inspiration in the patterns offered by the tall, vertical trees (figs. 1 & 2) or the profusion of blossoming flowers and foliage (fig. 3). The artist would transform such scenery into vividly coloured, densely pattered screen-like compositions, that owe their flatness and near-abstract treatment to Japanese colour woodcuts, which Klimt collected and hung in his studio. Klimt's landscapes share this flat, jewel-like quality with many of his figure paintings; the slender, slightly waving trees in Bauernhaus mit Birken echo the curving lines of the female bodies that appear to float against their background, as can be seen in Die Jurisprudenz (fig. 4).

In adopting the square format, and almost abandoning the horizon line, Klimt challenged the traditional notion of landscape painting with a foreground and a background, and transformed the canvas into a decorative plane, speckled with small brushstrokes of brilliant colour, giving the painting a jewel-like quality. The lack of sky, as well as the lack of a light source or shadows - indications of the temporary, the passing - render the work an autonomous, self-contained character. The landscape acquires an ethereal, meditative quality, with the aim of capturing the state of mind or evoking a mood, rather than recording a specific scenery.

Stephan Koja describes the intellectual milieu of Central Europe at the turn of the century, in which these lyrical landscapes originated: "Here, the search for a spiritual idiom, a visualization of the intellectual, also found its expression in landscape painting. Here, we are not dealing with heroic mountain paintings but with a counter-movement against the 'noble art' of idealism. For a long time, artists had been forced by tradition to alter nature stylistically, instead of showing it from an objective viewpoint. Refinement, elevation with an intellectual spiritual content, was the goal. Now, an artistic sensibility started to be felt in Central Europe, searching for nature itself, the objective world as subject matter. A form of natural lyricism developed in Germany and Austria toward the end of the nineteenth century, which spread out and found its crystallization points in certain centers. [...] The landscape now became a medium of feeling, a parable for inner emotions. One attempted to give a spiritual answer to forms of terrain, trees or celestial phenomena, within the scope of traditional forms of expression. [...] 'Atmosphere' (Stimmung) takes on a role of central importance in the theoretical discourse of the period and becomes the declared goal of landscape painting" (S. Koja, op. cit., p. 33).

Klimt's characteristic use of the square format canvas for his landscapes imbues them with a strong sense of proportion and harmony, allowing them to attain the quality of an object of meditation as well as of a subjective view of nature. Discussing the artist's development of this format, Johannes Dobai wrote: "Klimt had been using this shape of picture, suggesting as it does a sense of quiet, since 1898... preferring it for his figurative compositions and for his Symbolist paintings and portraits too. He did not, however, use it nearly as consistently in these works as he did in his landscapes, which, from then on, were invariably to be square in format. All his landscapes have something in common, which seems to be symbolised by their shape, regardless of any stylistic variation, all the landscapes are made fundamentally comprehensible as objects of meditation by means of this simple device" (J. Dobai, Gustav Klimt Landscapes, London, 1988, p. 11).

The present work was bough in Vienna by Georg and Hermine Lasus, and remained in the family until November 1939, when it was subject to a forced sale to M. Friede, the proceeds of which were used to pay taxes imposed by the Nazis. Surviving diary entries of Lasus's son-in-law Josef Danilowatz refer to the sale of the present painting, as well as another work by Gustav Klimt.