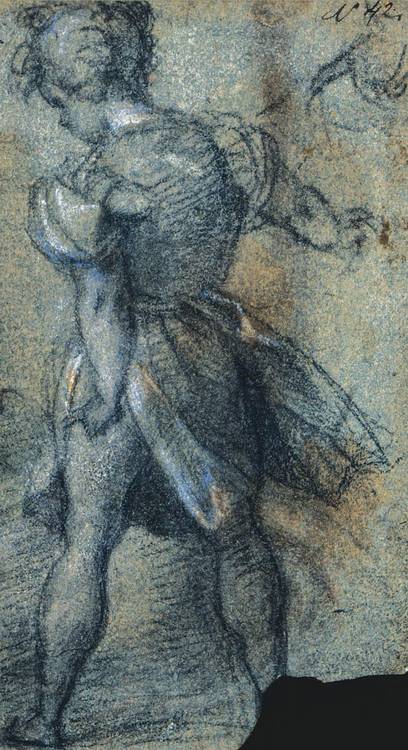 This unpublished drawing was recognized by Philippe Costamagna who correctly related it to the beautiful figure of the young boy standing, seen from behind, in the foreground of Pontormo's magnificent panel painting Joseph in Egypt, (London, National Gallery, inv.1131; see P. Costamagna, Pontormo, Milan 1994, no. 22, p. 129, reproduced). Janet Cox-Rearick has kindly confirmed the attribution from a colour transparency. The painting is part of a series which includes three other panels by Pontormo (all now in the National Gallery, London), two by Andrea del Sarto (Galleria Palatina, Florence), two by Francesco Granacci (Uffizi and Palazzo Davanzati, Florence) and six by Bachiacca (divided between the Galleria Borghese, Rome and the National Gallery, London). This unique group of scenes from the life of Joseph was commissioned by Salvi Borgherini for a camera nunziale on the occasion of the marriage of his son Pierfrancesco to Margherita Acciaiuoli in 1515. The panels were inserted in an elaborate walnut setting designed, together with the other furnishings of the room, by Baccio d'Agnolo, the architect of the townhouse in Borgo SS. Apostoli. The series of paintings is generally dated between 1515 and 1519.

Joseph in Egypt was the last of Pontormo's panels to be executed and depicts the later events of Joseph's life when he was joined in Egypt by his father and brethren. Vasari considered this panel Pontormo's masterpiece and described the original location in the Borgherini bedroom as: 'all' entrare della porta nel canto a man manca'. The painting tells the story like a sequence of shots in a film: the figure of Joseph is repeated four times but is always recognizable by his ochre tunic and purple cape and red hat. The exact date of the painting has been debated, but both Janet Cox-Rearick and Philippe Costamagna have proposed 1518-19. This later dating seems to correspond with Pontormo's growing interest in Northern engravings; in fact the landscape in the background is based on a print of 1510 by Lucas van Leyden (B.71). According to Vasari, Pontormo included the young Bronzino (born in 1503) as the youth in contemporary clothing seated at the bottom of the stairs in the foreground, speaking to the standing figure. If this is correct, the panel could not be earlier than the suggested dating as Bronzino is generally believed to have joined Pontormo's studio around 1519.

The present drawing differs from the final, painted figure in several respects: the head is seen in profile and the nose is visible, the right arm is outstretched in the same position but it does not hold a stick, and the drapery of the left sleeve is formed differently. Extremely few preliminary drawings for this elaborate and intricate composition have survived, but the infra-red studies of the painting show that the artist instead drew directly on the prepared panel, sometimes changing the same figure two or three times, starting first with a nude and afterwards sometimes adding indications of the drapery, thereby creating an amazingly interesting underdrawing which is often visible to the naked eye (see Carol Plazzotta and Rachel Billinge, 'The underdrawing of Pontormo' s Joseph with Jacob in Egypt', The Burlington Magazine, November 2002, pp. 660-670, reproduced). The underdrawing for this figure shows that the right arm was originally bent (the final position with the arm stretched out is more successful, as Janet Cox-Rearick has commented orally) and that the left hand was touching the drapery of the tunic. For more extensive information on the various changes Pontormo made to the composition, see the article mentioned above.

Perhaps becuase of this working method, only three other drawings connected with this composition are known. One is a double-sided sketchbook page in the Uffizi (inv. 6735F), with studies on the recto for the figure of the brother of Joseph in the lower left of the composition and on the verso for the female statue in the background. The second is another double-sided sketchbook sheet, belonging to the Fondo Corsini in the Farnesina (inv.GNS F.C.122), which has on the recto studies connected to the upper part of the statue of a man to the left of the picture (see J. Cox-Rearick, The Drawings of Pontormo, New York 1981, vol. I, nos. 90, 91, 92, vol. II, reproduced). The last is a red chalk study for the head of the old man with a blue cap behind the Pharaoh, now in a private collection in Geneva (see London/New York, Colnaghi & Co., An Exhibition of Master Drawings, 1992, no. 2, reproduced).

The present drawing, unlike these others, is a finished study, and is executed in the unusual medium of black chalk with white heightening on blue paper. We are, however, very grateful to Catherine Monbeig Goguel for bringing to our attention another drawing by Pontormo of around 1519, in which the media and the blue paper support are very similar to this (Frankfurt, Städelsches Kunstinstitut, inv.4288; see J. Cox-Rearick, op.cit., vol. I, no. 187, vol. II, reproduced).