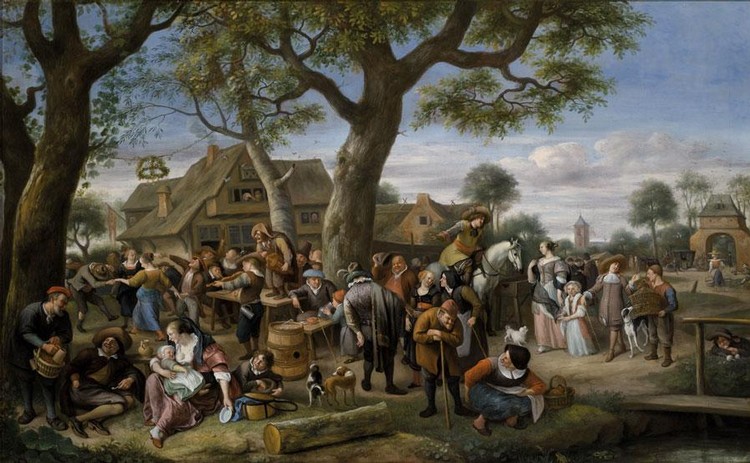 Willem Jacobsz. van Heemskerk, Leiden, in his posthumous inventory of 1692, and thence by descent to his grandson Leonard van Heemskerk;
His deceased sale, Leiden, Delfos, 2 September 1771;
Probably Hendrick Twent, Burgomeester of Leiden;
His sale, Leiden, Delfos, 11 August 1789 (as Warmond'sche Kermis);
With Chaplin, London, who according to Smith brought it to London in 1836, having bought it from 'a gentleman near Leyden in whose family it had remained from the time it was painted';
With W. Artaria, by whom bought on behalf of Edmund Higginson, Saltmarsh Castle, Herefordshire, by 1842, when no. 20 in his catalogue;
His sale, London, Christie's, 4 June 1846, lot 159, for £210 to Chaplin;
With Chaplin, London;
Anonymous sale (Field sale, according to Hofstede de Groot), London, (possibly 3-6 June) 1856, for £106;
Anonymous sale, 1864, for £105, unsold (according to Hofstede de Groot);
C.J. Nieuwenhuys, Brussels;
His deceased sale, Brussels, Le Roy, 4 May 1883, lot 19;
Charles T. Yerkes, New York;
His deceased sale, New York, American Art Association, Mendelssohn Hall, 5-8 April 1910, lot 140;
With F. Kleinberger & Cie, New York & Paris, by 1921;
Lavern Norris Gaynor by whom given to the present owner (offered New York, Christie's, 31 May 1989, lot 124).

This painting was known in the 18th century as The Fair at Warmond. The village of Warmond is just north of Leiden, where Steen settled with his family in 1656 after failing as a brewer in Delft. He rented a house in Dorpstraat and devoted his full attention to painting, remaining there until 1660 when he moved the family to Haarlem. One might assume that the present picture was painted sometime during this period, and Alfred Bredius dated it circa 1658.1 It may however date from after Steen moved to Haarlem, as Braun, who dated it circa 1665, evidently thought.2 The identification of the subject may be apocryphal, since there is nothing that clearly connects the event depicted with the village of Warmond (Bredius' suggestion that it is Het huis Teylingen, a medieval fortress, is implausible). Nonetheless, the picture's traditional title, together with its early provenance -- it seems to have been in Leiden from before 1692 until 1789 or later -- suggests that it was painted in Leiden, and that the event depicted -- real or imaginary -- represents a kermis outside a small country village such as Steen would have been familiar within the environs of Leiden.

In The Fair at Warmond, the scene is played out in front of a large house and gate-house. Steen includes himself (and probably his wife and children, as Karel Braun thought3) reclining in the lower left corner of the painting, wearing an amused expression. Disengaged from the action taking place beyond, from which they are physically removed, Steen and his family and the vendor next to him play the part of witnesses to it, as if playing the part of a Greek chorus, or a comic commentator in a latter-day play. Jan Steen's paintings nearly always have theatrical overtones, and are in some cases, as with his Rederijker pictures, literally theatrical. This painting, in which the many people depicted are arranged as if on a stage set, is no exception.

Whether the painting depicts a kermis (a fair of a religious nature) or a jaarmark (an annual market) is difficult to say with certainty, although the banner hanging from the house suggests it may be the former. These boisterous depictions of fair scenes owe their origins to the depictions of them by Pieter Bruegel the Elder of a hundred years earlier, and by his many followers throughout the intervening century. In the North Netherlands artists began to depict local commercial success, and in some cases to depict particularly fairs in the towns and villages of the Seven Provinces, including daily marketplaces,4 the beurs (stock exchanges), the horse and livestock fairs and the kermis, or free markets, when normal business regulations were suspended.

Jan Steen was a prime exponent of this new genre. The Fair at Warmond, though highly typical of Jan Steen, is more generic and caricatural in character than many of his depictions of specific fairs and kermises. It includes all manner of classes of people, from drunk and lecherous peasant couples of all ages to well-dressed local nobility and their offspring; what unites them is that Jan Steen paints all of them caricaturally, gently poking fun at their behaviour and manners, be it the old man leering at the woman urinating in the foreground, or the foppish eldest son gesticulating snootily at the peasant boy with a poultry coop beyond and to the right. Their interaction, and those of others within the picture, reinforces the theatrical aspect of this painting, in which everyone is given a part to play.

Not as raucous as some of Steen's fair paintings, the present picture depicts instead, a relatively civilised kermis in a rural setting outside a small Dutch village -- though the prospect of more ribald activity as the day advances is ever present. Its unusually large scale suggests that it may have been a specific commission. 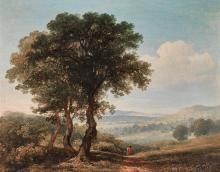 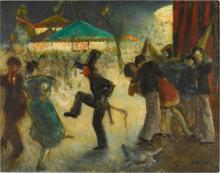 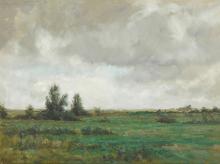 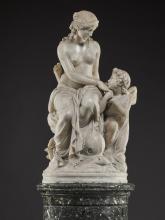