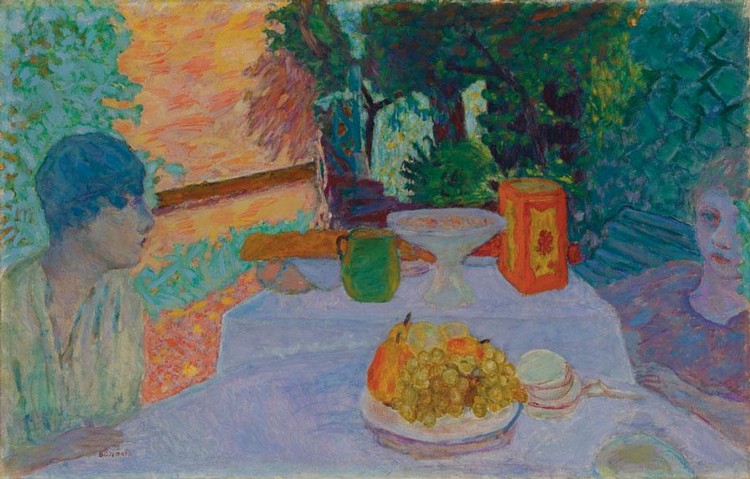 Après le déjeuner or Le Déjeuner of circa 1920 is a remarkably vibrant composition exploring two of Bonnard's main themes -- the intimate moments of everyday life and the lush landscapes painted at Veronnet and in the South of France (fig. 1). In 1918 he painted La Terrasse (fig. 2), the first of a group of landscapes painted from the terrace of Ma Roulotte, the artist's house at Veronnet, showing a panoramic view of the garden. The present work shares the brilliant quality of light characteristic of Bonnard's mediterranean works, breaking through onto the scene and bathing the table, the two figures and their surroundings in an explosion of colour. Discussing Bonnard's work from this period, John Rewald notes: 'With the exception of Vuillard, no painter of his generation was to endow his technique with so much sensual delight, so much feeling for the indefinable texture of paint, so much vibration. His paintings are covered with colors applied with a delicate voluptuousness that confers to the pigment a life of its own and treats every single stroke like a clear note of a symphony. At the same time Bonnard's colors changed from opaque to transparent and brilliant, and his perceptiveness seemed to grow as his brush found ever more expert and more subtle means to capture the richness both of his imagination and of nature' (J. Rewald, in Pierre Bonnard (exhibition catalogue), The Museum of Modern Art, New York, 1948, p. 48.)

In the present work the spontaneous quality in the depiction of the figures enhances the intimacy of the scene, and conveys the artist's fascination with the daily rituals of the bourgeoisie. The woman on the right bears a striking resemblance to Bonnard's many depictions of his wife Marthe. Whereas in the great series of interiors she is always the linchpin of the composition, here she is moved towards the edge of the canvas, a compositional device that reveals the bold, innovative spirit of Bonnard's art during this period. In his depictions of Marthe she is usually seen in private moments, eating, reading, bathing or drying herself, in pursuit of everyday activities, a subject that preoccupied the artist since his early intimiste interiors. Rendered in an intimate setting, Bonnard's women are separated from the outside world, and in the present work this is achieved by submerging them in the foliage of the terrace, which creates the illusion of an enclosed space. Their gazes, directed away from the viewer, preserve the intimacy of the scene we are witnessing.

Après le déjeuner or Le Déjeuner exemplifies Bonnard's use of a distorted perspective, with the table top rising up into the centre of the canvas merging into the dense greenery of the climbing vines and trees. The artist frequently played with traditional notions of perspective, placing the central, focal objects of his compositions at the periphery of the canvas. Jörg Zutter describes Bonnard's talent and innovative qualities in the following manner: 'he had a unique talent for depicting the world as a symphony of vivid colours and organic surfaces. His way of painting people and landscapes suggests a careful balancing act between observing and capturing nature and translating it into vibrant colours and interrelated forms [...] In their fusions of figuration and abstraction, the way they slip in and out of focus, and their volatile, intoxicating colours, his interpretations of reality are without precedent in early modernism, keeping the viewer in a new kind of vertigo' (J. Zutter, in Pierre Bonnard: Observing Nature (exhibition catalogue), National Gallery of Australia , 2003, pp. 37-38).

The artist's main concern is to capture the quiet moments of domestic life in a decorative and modern style. As so often in his paintings, balance is struck between the jostle and brightness of the paint and the quiet, almost meditative stillness of the moment. 'His art could not operate within the vestigial spatial formula inherited by most twentieth-century painters: that shallow shelf, or simplified vertical/horizontal grid, which was the legacy of Poussin and David, via Cézanne and Cubism. In the previously unchartered territory of peripheral vision Bonnard discovered strange flattenings, wobbles, shifts of angle as well as of color, and darkenings of tone, penumbral adventures and metamorphoses which liberated him from visual convention. It was as though the central area of fact were surrounded by much less predictable, almost fabulous margins; where imagination and reverie and memory could be asserted as a heightened reality, in 'impossible' intensities of color' (Timothy Hyman, Bonnard, London, 1998, pp. 160-161).