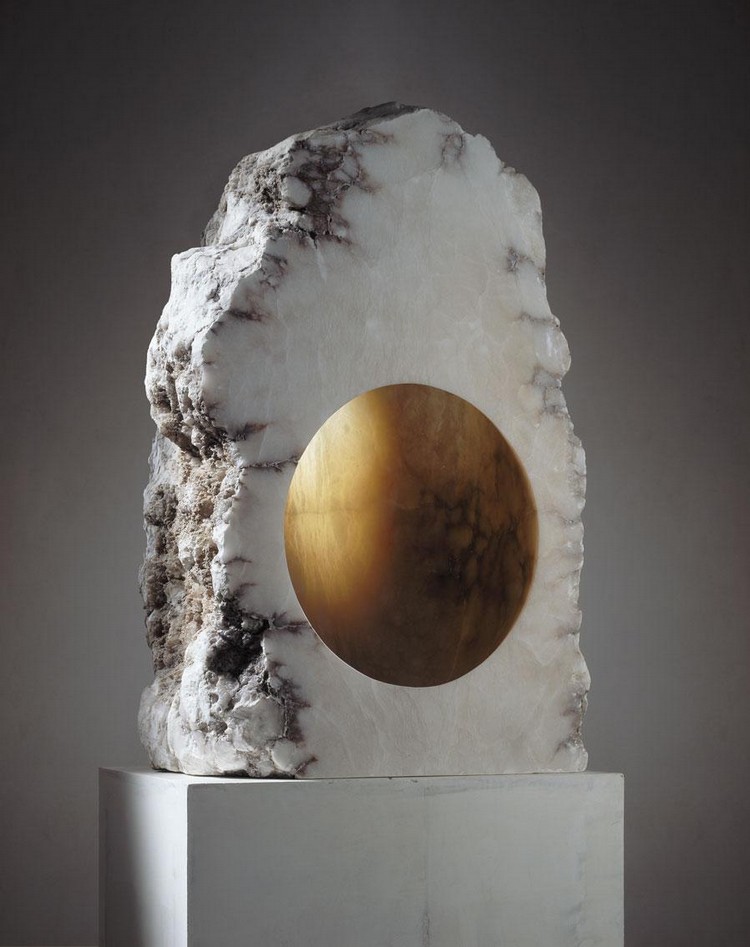 PROPERTY FROM A PRIVATE SWISS COLLECTION

Barbara Galdstone Gallery, New York
Acquired directly from the above by the present owner

"The void is not silent. I have always thought of it more and more as a transitional space, an in-between space. It's very much to do with time. I have always been interested as an artist in how one can somehow look again for that very first moment of creativity where everything is possible and nothing has actually happened. It's a space of becoming ... something that dwells in the presence of the work ... that allows it or forces it not to be what it states it is in the first instance." Conversation between Anish Kapoor and Homi K. Bhabha, 1998, cited in: Exhibition Catalogue, London, Hayward Gallery, Anish Kapoor, 1998, p. 35

This jagged, raw, rough-hewn solidity of alabaster which gives way to a smooth, shining surface through which a circle of geometrical precision shines justifies Kapoor's belief that "a man's products may be more than himself." Concerning himself here, in the Volterra series, with the dialogue between polarities, between light and dark, the solid and the ethereal, the present and the absent, Kapoor manages to bring all these contrasts to the fore but without setting them up in opposition to one another. Instead, there is a coupling of dichotomies that seems to give life to the whole. Kapoor's sculptures are "born"; describing the end of the process, Kapoor has explained that a moment suddenly occurs when the stone ceases to be stone anymore and instead becomes something else -- "becomes light, becomes a proposition, becomes a lens." (ibid., p. 29)

Kapoor's choice of material brings with it strong cognitive echoes of ancient and medieval sculpture and reflects the Italian tradition of stone-carving. Originally an attribute of the Ancient Egyptian cat-headed goddess Bastet, from whom the stone is said to get its name, alabaster was first mined in mass quantities in the Etruscan town of Volterra. It was a popular material in medieval England for small statues of holy figures and literature is also replete with the supposed similarities of alabaster to female skin. Building on this and following on from his 1997 Arte all'Arte project in Volterra, Kapoor creates a new form by letting the material speak for itself. He seeks out the history, the resident narrative within the stone itself. And so, Kapoor does not unveil an angel trapped in marble but rather fully realises Michelangelo's dictum that "sculpture is made by taking away whilst painting is made by adding."

In Kapoor's aesthetic philosophy when there is a meeting of the material and the non-material an object -- be it a work of art or any material thing -- is "truly made" and therefore beautiful. "(A) thing exists in the world because it has a mythological, psychological and philosophical coherence. That is when a thing is truly made." (Anish Kapoor: Interview with Sherry Gaché in: Sculpture February 1996, p. 22) By creating a void within the stone, Kapoor produces what Richard Serra calls an anti-environment. Just as in Heidigger's parable of the jug, the essence of the jug does not come from the material it is made of, but in the void that it holds, so Kapoor makes emptiness. Whilst in other "void" sculptures made from more modern materials, the void seems to bring a "descent into limbo", this sculpture carved from an ancient, more human material achieves an uplifting spiritual quality. The precisely carved circle set off against the raw stone, especially when hit by light, gives the sculpture a totemic, almost sacerdotal power. It is unquestionably "truly made".