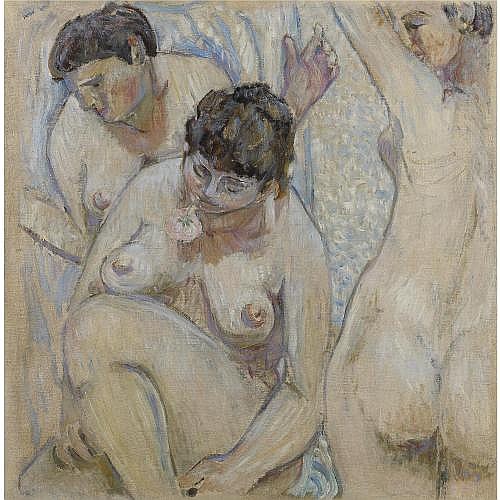 signed in Latin on reverse oil on canvas

Formerly in the collection of the artist's family

PROPERTY FROM A PRIVATE EUROPEAN COLLECTION
Another version of the offered lot is in the State Tretyakov Gallery, Moscow Painted in 1904 when Larionov was still only twenty-five and at the Moscow School of Painting, the present work, at once intimate in gaze and monumental in its compositional structure, depicts three voluptuous dark-haired bathers that fill the viewer?s field of vision. The women are positioned in archetypal poses against a pale-blue hanging drape that forms the backdrop to the composition. The central seated nude, with her legs drawn up to her chest, has a pale rose between her lips, symbolising perhaps both innocence and the nascent flowering of sexuality. Already by 1904, Larionov?s reputation at the Moscow School of Painting was becoming established and his work had brought him to the attention of collectors and critics alike. But as Igor Grabar recalls in his memoirs, ?At this time, Larionov was still very restrained, standing almost entirely on the platform of Impressionism? (Igor Emmanylovich Grabar, Moia Zhizn?, avtomonografiya, Moscow/Leningrad, 1937, p. 267, translated from the Russian.) This early depiction of bathers, coming at a crucial stage in Larionov?s artistic development, can be seen as an important prefiguring of his more crudely-delineated, experimentally modernist series of bathers that he completed during late 1907 and early 1908 (see: Mikhail Larionov, Bathers, 1907-1908, oil on canvas, The State Tretyakov Gallery, Moscow; illustrated in Anthony Parton, Mikhail Larionov, London, 1993. Fig. 13.) Three Female Bathers with a Rose brings together two central themes that preoccupied Larionov at the time of its completion: the motifs of bathers and roses. In 1903 he had undertaken a tour of the Crimea with Natalia Goncharova, who would much later become his wife. The figures of the bathers in the present work are perhaps culled from his recollection of figures observed during their visit to the Black Sea, seemingly transposed here to an interior setting that recalls something of Edgar Degas? depictions of nudes, captured as if caught unawares by a voyeur. Larionov thus deftly combines a post-Impressionist artistic viewpoint with an almost Impressionist handling of pigment, surface and form, setting up an oscillation between artistic idioms and trends that redefined the act of painting in the last years of the nineteenth century and the first years of the twentieth. This work can be viewed as a key exemplar of the paradigm shift that was taking place in Larionov?s painting at this time in his career.