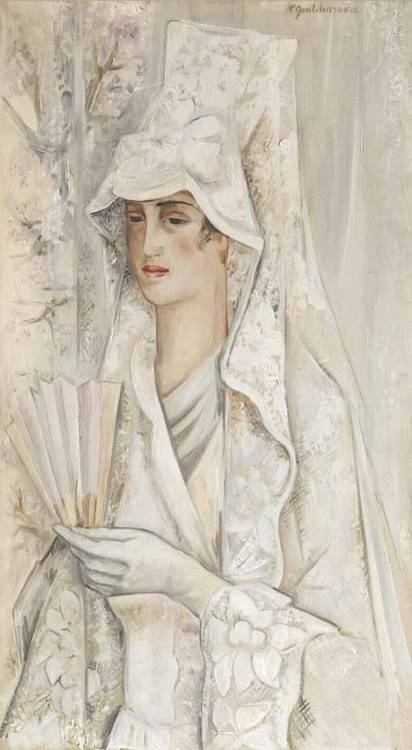 SIGNED AND DATED (MAKER'S MARKS)
signed in Latin t.r.; further signed on the reverse and stretcher

THE ESTATE OF NICHOLAS BANCROFT, USA

Goncharova constantly revisited the theme of Espagnole or Spanish Dancer throughout the 1920's and 30's. A trip to Spain in 1916, at the request of Sergei Diaghilev, first acquainted her with the distinctive traditional dress of Spanish dancers. During this visit she worked on costume designs for two ballets on a Spanish theme: Spanish Rhapsody, to music by Maurice Ravel, and Triana. Neither ballet was performed, but her sketches sparked a life-long love of the subject, repeated in many differenet styles and media, from lithographs to ambitious oil compositions.

It is possible that Goncharova saw something 'Russian' in the Spanish dress. Lace mantilla, pulled high over the head, seem to echo the form of a kokoshnik worn by Russian brides; and the long floral scarves hugging the body, recall those worn by Russian peasant women.

Goncharova first exhibited her Espagnole paintings at the Venice Biennale in 1920, which included three works on canvas, and one watercolour. In the same year. she created one of the most significant works on this theme: a row of huge panels in the manner of a Deisis, depicting full-length figures in muted tones of brown, white and black, now in the collection of the film actress, Sophia Loren. (See M. Chamot, Goncharova, Paris, 1971, p.101).

Commentators find stylistic similarities in the manner of depiction of the head and hands in Goncharova's Espagnoles with those of the Virgin in Russian icon painting, with their elongated necks and faces with ethereal expressions, with the extenuated fingers of the hands all finding parallels.

Magnolias frequently decorate the mantilla or the background. The offered lot displays many of these features and, in keeping with other compositions on this theme, is painted in muted tones of white and grey with some hints of pale pink. Three similar examples, dating from the 20's and 30's are in the collection of the Musée de Pompidou, Paris. (See Centre Pompidou, Natali Gontcharova Michel Larionov, Paris, 1995, pp.116-7).

Goncharova's friend, the poer Maria Tsvetaeva, gives us some insight into the artist's practice. Upon fulfilling a commission for an American buyer and sending the work abroad, Goncharova had the habit if immediately painting another one with some minor changes to replace it.