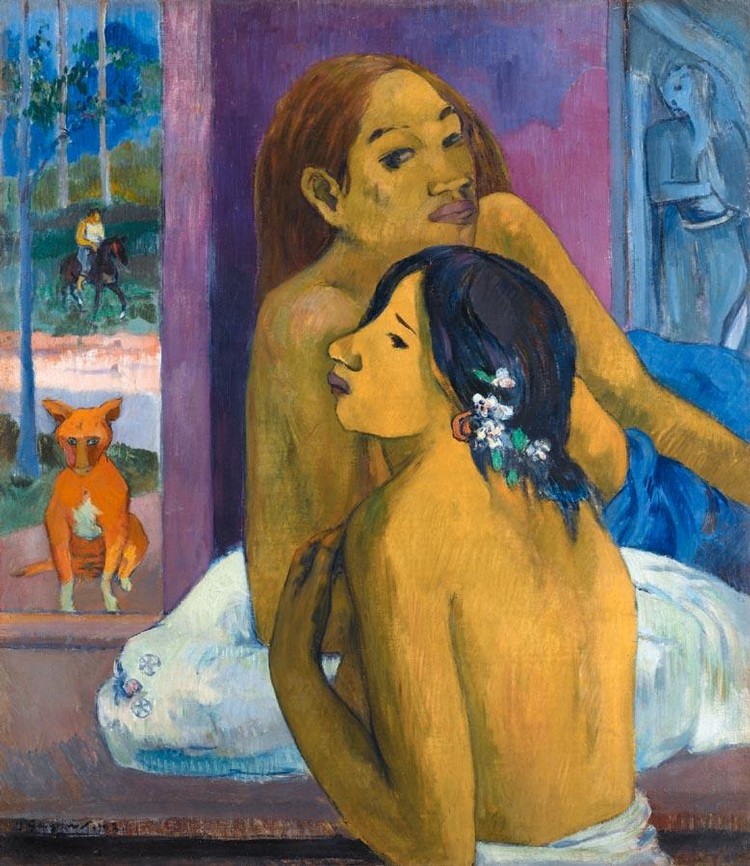 PROPERTY FROM A PRIVATE AMERICAN COLLECTION

To be included in the new edition of the Catalogue raisonné de l'~uvre de Paul Gauguin being prepared under the sponsorship of the Wildenstein Institute.

Executed in 1902, during his second and last visit to the South Seas, Deux femmes or La Chevelure fleurie epitomises Gauguin's fascination with his idyllic surroundings, and presents a peak of the artist's life-long search for the primitive achieved in his last years. Attracted by the freedom, wilderness and simplicity of this remote place far removed from the Western world, Gauguin produced works in which the fluidity and expressiveness of the brushstrokes reflect the sense of artistic liberation. The dynamic, vivid palette of the present painting evokes the richness of nature that excited the artist, and the warm, golden yellow of the women's bodies contrast the purple hues of the background. The particular appeal of this work lies in the tension between the overt sensuality of the two semi-nude figures and the mysterious quality of the overall atmosphere.

Having spent two years in Tahiti, in July 1893 Gauguin returned to France, in order to sell his paintings and raise funds for subsequent travels. After twenty-two months of energetic and intense activity of self-promotion, the artist left Marseille on 3rd July 1895. In September he arrived at Papeete, where he had spent most of his time during his first stay on the island, but having found it increasingly Europeanised and colonised, moved to Punaauia, where he lived in a traditional Tahitian hut made of bamboo canes and palm leaves.

In 1901 Gauguin finally carried out his old intention of moving even further to the islands of Marquesas, and on 10th September left Tahiti on the steamship Croix de Sud. He settled on the island of Hivaoa, where life was more savage and scenery far wilder than in Tahiti. Furthermore, its inhabitants had a reputation for being the most handsome people in the South Seas -- taller, slimmer, and with elegant, elongated features. The artist himself wrote: 'I am certain that in the Marquesas, where models are easy to find (while in Tahiti it is getting more and more difficult), and where in addition there are landscapes to discover -- new and more primitive sources of inspiration, in fact -- I can do fine things. My creative powers were beginning to flag here, and moreover the art public was getting too familiar with Tahiti' (quoted in Bengt Danielsson, Gauguin in the South Seas, London, 1965, p. 228). It was on this remote island, where Gauguin was to stay for the rest of his life, that the present work was painted.

After months of financial struggle and deteriorating health, the beginning of 1902 saw a period of relative prosperity for Gauguin, and it was probably during this time of increased enthusiasm and artistic creativity that he painted Deux femmes. Showing two semi-nude female figures in an interior setting, it depicts the atmosphere of languor characteristic of the tropics, and its strong, vibrant tones demonstrate the artist's fascination with the warm, lush colours of the sunlit island. The depiction of the two figures reflects Gauguin's admiration of the golden yellow skin of the Marquesan women, and their proportionate bodies, more elegant than the muscular, androgynous physique of the Tahitian women. He wrote about the Marquesan type: 'Their beautiful bodies, without any whalebone to deform them, move with sinuous grace under their lace and muslin chemises'.

Whilst still fascinated with the wilderness of the island and its nature, Gauguin became more interested in the mythical, spiritual quality of his surroundings during his second stay in the South Seas, and his imagination and creative energy often focused on compositions that transcended the particular place in which they were painted. He created his own mythic universe which was a conflation of the religious traditions of the East, West and Oceania, of beliefs both ancient and contemporary. The artist's personal mythology, combining the physical with the spiritual into an idyllic, harmonious world, reached its most accomplished expression in Gauguin's monumental Where Do We Come From? What Are We? Where Are We Going? of 1897. In the present work, the physical beauty of the figures, rendered with lush, vibrant colours, is imbued with an air of spirituality and otherworldliness typical of Gauguin's late works. The praying figure depicted in the top right corner adds a note of mysticism, its blue tonality, usually associated with the spiritual, in sharp contrast with the lush tone of the women's bodies.

Another curiosity in the present composition is the fox appearing in the doorway, often interpreted as a symbol of perversity. George T. M. Shackelford compared the fox in Deux femmes with a wooden relief Soyez amoureuses vous serez heureuses of 1889, also showing the animal among a number of exotic figures: 'The odd relationship between the relief of 1889 and a painting of 1902 is underscored by another canvas completed in the same year, Two Women [the present work], in which the Breton fox sits outside the door of a Polynesian dwelling. Within the house, two figures sit in curious juxtaposition, with a strange "carved" figure perched at the upper right of the composition' (G. T. M. Shackelford, in Gauguin Tahiti. The Studio of the South Seas (exhibition catalogue), op. cit., p. 254). Apart from painting and wood carving, during this time Gauguin executed a number of transfer drawings, often used either as studies for his paintings, or to recombine aspects of paintings thus arriving at new images.

In his account of the artist's final years, Richard Brettell wrote: 'In 1901, Gauguin moved to the even more distant island of Hivaoa, part of the most remote island group on earth. From the tiny village of Atuona, where he lived the last two years of his life, he kept abreast of world news, followed artistic and literary events throughout Europe, and busied himself with the decoration of his last total work of art, the famous House of Pleasure. After years of struggle, he came to a financial agreement with Ambroise Vollard who, in exchange for a more-or-less regular income, imposed a certain level of productivity upon Gauguin. Since his works were then in demand, he finished them relatively quickly and sent them in batches to France ... the rapidity with which he worked had a liberating effect on Gauguin. His compositions became more varied, and he experimented even more dramatically with relationships of color' (R. Brettell, in The Art of Paul Gauguin (exhibition catalogue), op. cit., p. 395).

Whilst many artists from the late nineteenth and early twentieth century-- from Symbolists to Fauves and German Expressionists -- followed Gauguin's example in their quest for the 'primitive' and 'savage', he was the one to have ventured furthest in the pursuit of these ideals. A fascinating and highly accomplished image of harmony between man and nature, Deux femmes is a powerful testament not only to Gauguin's own creative vision, but also to the artistic and spiritual ideal of his time.