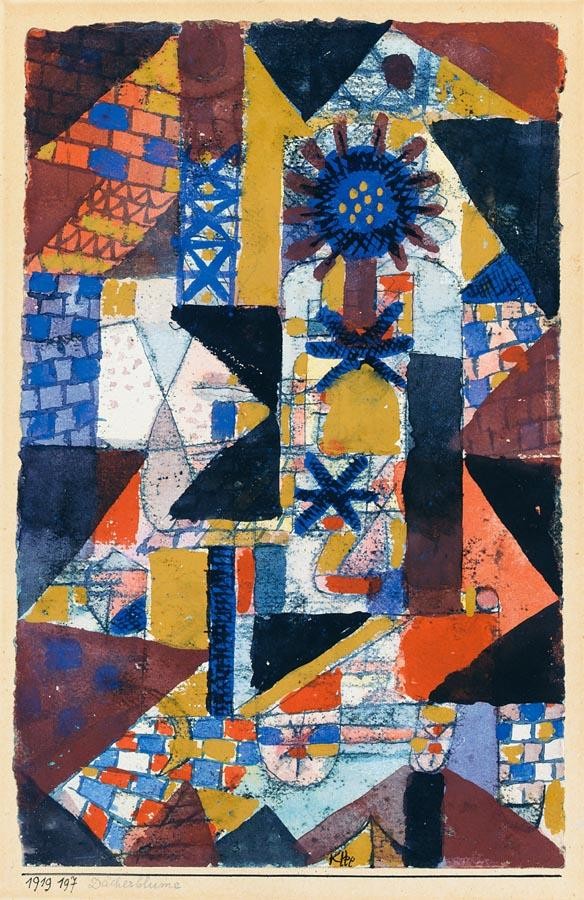 gouache, watercolour and pen and ink on paper laid down on the artist's original mount

Executed in 1919, Dächerblume combines two major themes that preoccupied Klee at this time: architecture and gardens. The use of bright colours harmoniously juxtaposed in flat, geometric planes reflects the block-like squares with which he had previously depicted the North African architecture, while at the same time heralding a new tendency towards abstraction. This increasing interest in abstraction is visible in the brown and black triangular patches of colour which, superimposed over the architectural elements, draw the viewer's eye back to the surface, emphasising the flatness of the medium in a manner resembling collage.

The composition of the present work is built of geometric forms, mostly rectangles and triangles painted in bright colours, some of them displaying a pattern reminiscent of brick layers. These references to architecture are set in contrast with flower-life forms underlining the joyous, playful tone of the work. Klee, who at the invitation of the architect Walter Gropius was to join the Bauhaus school in Weimar in 1921, did not, however, approach architecture in a rigidly constructivist, utilitarian manner close to other Bauhaus members. Retaining the poetic, naïve manner of his earlier work, Klee created a utopian, fantastic architecture in response to the destruction caused by World War One. During this phase of so-called Architekturphantasie, he executed a number of oils and watercolours in which he constructed a new, fantastic world, of which Dächerblume is a fine example.