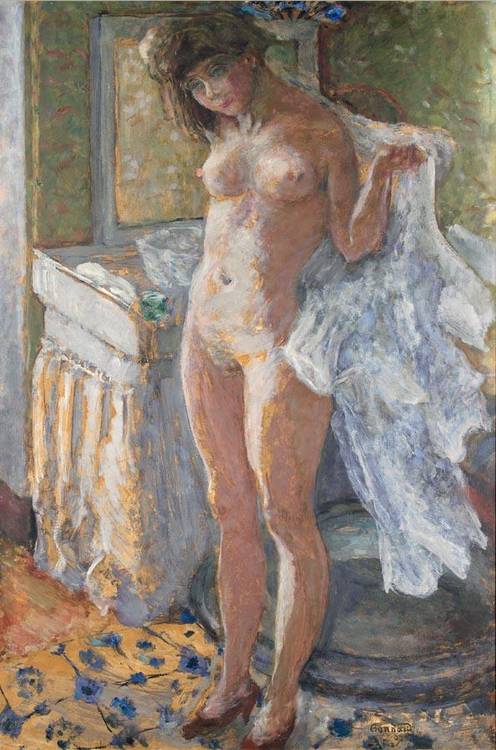 Dans le cabinet de toilette or Jeune fille s'essuyant is a monumental example of Bonnard's favourite and most celebrated theme, that of a female nude in an interior. Throughout his career, he depicted bathers and nudes in a domestic setting, occupied by a daily routine. The subject of the present work is Marthe (fig. 1), the artist's life-long companion, muse and model for a number of his portraits and intimate interiors, as well as for his photographs. Bonnard met Marthe de Méligny (née Maria Boursin) in 1893, when she was a fashionable young Parisian shopgirl, and married her in 1925. The image of Marthe provided the artist with an endless source of inspiration: he depicted her going about her everyday activities - washing, dressing or undressing, sitting at a table or reading.

In the present work, Marthe is captured in a personal moment, drying herself with a towel after a bath, completely absorbed in this act, as if unaware of being watched. Despite the imposing scale of this work, Bonnard retains the warm, personal atmosphere of his best intimiste paintings, portraying his muse indulging in a private moment. At the same time, he takes pleasure in depicting her nude figure in its full glory, lit by the warm light coming from an invisible source to the left of the composition. Bonnard treated her skin as if depicting a landscape, creating a dramatic contrast between those parts exposed to light, painted in white tones and golden highlights, and the parts in the shadow, depicted in deep pink, almost purple hues. The artist delighted in depicting Marthe in dramatically lit interiors, such as in the monumental Nu à contre-jour of 1908 (fig. 2) and Nu devant la cheminée of 1919 (fig. 3).

In Dans le cabinet de toilette Bonnard focused not only on portraying his muse and her curvaceous physique, but paid equal attention to the interior surrounding her. The side of her dressing table, illuminated by the same light as the figure, repeats the tonal pattern of the nude's body, while the golden sun rays falling on her skin are echoed in the bright yellow highlights around the mirror and on her towel. The artist's fascination with patterns and decoration is reflected in the treatment of the carpet on which she is standing. Originating in his earliest Nabis work, various geometrical, floral and other patterns are often found in Bonnard's paintings of this period, such as Nu à la lumière of 1909 (fig. 4). The irregular shape of the woman's flowing towel imbues the composition with an air of nonchalance and immediacy.

Discussing Bonnard's portrayals of Marthe, Sarah Whitfield wrote: 'Marthe is almost always seen in her own domestic surroundings, and as an integral part of those surroundings. [...] In a sense many of these works are variations on the theme of the artist and his model as well as on the double portrait. This is the case even when Bonnard is not visible. [...] We are always made acutely aware that whatever the subject of the painting - a nude, a still life, a landscape - what we are being asked to witness (and to participate in) is the process of looking. But it is in the paintings of Marthe above all that we find Bonnard portraying himself as the ever-attentive, watchful presence' (S. Whitfield, 'Fragments of Identical World', in Bonnard (exhibition catalogue), Tate Gallery, London, 1998, p. 17).