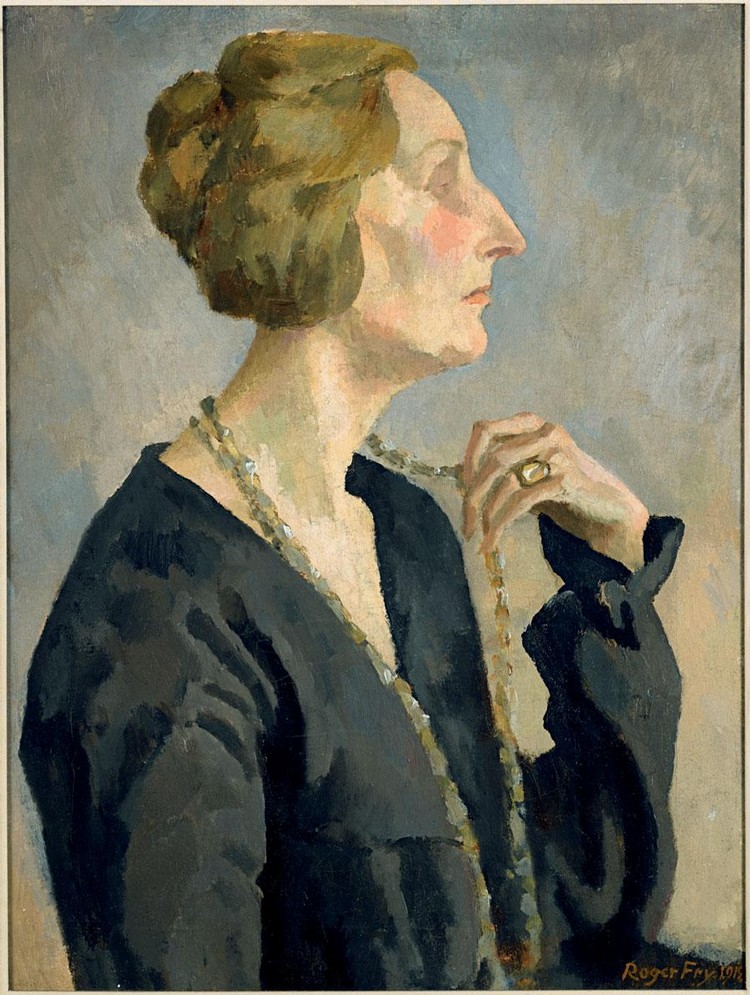 By 1918, the year of the present portrait, Edith (1887 - 1964, fig.1) had already carved out her reputation as one of London's most charismatic personalities. In that year, the young poet had become solely responsible for editing Wheels, a Modernist anti-Georgian poetry anthology published in six volumes between 1916 - 1921 with cutting edge illustrations by artists such as William Roberts. She was probably introduced to Fry in the early years of the First World War by her brothers Osbert and Sacheverell, themselves contributors to Wheels. Edith's biographer Geoffrey Elborn recalls that one of the main benefits of her brothers living in Chelsea, an area she considered more 'bohemian' than her own in Bayswater, was that they were able to entice more interesting people to dinner.

Fry appears to have completed two portraits of Sitwell, both most probably executed in the summer of 1918; the first in which Edith is seated in front of an Omega screen (see fig.2, Coll. Sheffield Galleries and Museums Trust) and the present work, unseen in public for more than 30 years. In her autobiography, Edith refers to sitting for Fry for 'several portraits' although she only records one incident that is typically dramatic when 'she wore a green evening dress, the colour of the leaves of lilies, and my appearance in this, in the full glare of the midsummer light of midday, in Fitzroy Square, together with the appearance of Mr Fry, his bushy, long grey hair floating from under an enormous black sombrero, caused great joy to the children of the district as we crossed from Mr Fry's studio to his house for luncheon' (Edith Sitwell, Taken Care Of, an autobiography, 1965, p.83).

Fry was clearly fascinated by Sitwell's eccentric character and her distinctive physical features. They are emphasized in the present work by the prominent side-profile pose reminiscent of Piero della Francesca's Battista Sforza, Duchess of Urbino, (fig.3, Coll. Uffizi Gallery, Florence); a reference that Sitwell would have found highly amusing. In contrast to the brighter tones of the Sheffield portrait, Fry has set Edith against a plain blackground and in dark dress, accentuating her physical features more prominently and specifically highlighting what she considered her best feature; her hands, positioned delicately craddling a string of beads. It is significant that her arch enemy Wyndham Lewis later so conspicuously omitted her hands in his famous portrait of her now in the Tate Gallery. Fry's friendship with Edith appears to have been relatively shortlived and it is a typical reflection of the highly volatile nature of Bloomsbury relationships that in Virginia Woolf's biography of the artist, there is no mention at all of arguably his most enigmatic female sitter.