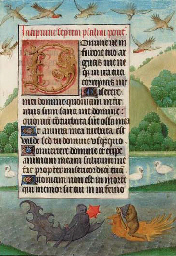 FANTASTIC WATER TOURNAMENT, on a leaf from a Book of Hours, ILLUMINATED MANUSCRIPT ON VELLUM

Lot 6: FANTASTIC WATER TOURNAMENT, on a leaf from a Book of Hours, ILLUMINATED MANUSCRIPT ON VELLUM

[Ghent, c.1500] 184 x 127mm (visible painted area). Initial D with acanthus-frond staves in ochre and liquid gold 'casting' a dark pink shadow on a lighter pink ground, full-page border of an aquatic battle between an armoured merman and a wildman mounted on a fantastic water-bird, swans swimming on the lake beyond them and birds flying above a landscape of wooded hills, 17 lines of text written in black ink in a gothic bookhand between two verticals and 18 horizontals ruled in pink, justification: 119 x 74mm, rubric in red, one-line initials in burnished gold on grounds and infills of blue and pink with white penwork decoration, similar initials and line-endings visible on verso (minor losses of pigment). Mounted, in a gilt wood frame. As signalled in the rubric, the leaf opens with the first of the Penitential Psalms and so formed part of a Book of Hours or prayerbook. The engaging border is attributable to the workshop of the Master of the Older Prayerbook of Maximilian, named from the manuscript made for the Emperor Maximilian, Vienna ™NB cod.1907. The Master was one of the leading figures in the so-called Ghent-Bruges School of illumination, collaborating with Gerard Horenbout and Simon Bening as well as the anonymous Master of the Prayerbooks of c.1500 and exerting such a formative influence on Simon Bening that he is plausibly identified as Simon's father, Alexander Bening. He apparently first used the design, around the opening of the Psalter of St Jerome, in the Hours of William, Lord Hastings, datable before his execution in 1483 (BL, Add. 54782, f.279, ill. in D. Turner, The Hastings Hours ). Clearly of great appeal, it reappears in some of the finest Netherlandish manuscripts of the early sixteenth century: the Hours of James IV of Scotland (™NB cod.1897, f.211v) and for St Thomas in the Rothschild Prayerbook (sold in these rooms 8 July 1999, lot 102, f.212). The workshop of the Master of the Prayerbooks of c.1500 also adopted it in a richly illuminated hours in Cambridge, Fitzwilliam 1058-1975 (A. Arnould and J.-M. Massing Splendours of Flanders, p.88) and the Prayerbooks Master is the likely source for the birds which here animate the empty sky of the Hastings Hours. The battling figures bear no relation to the psalm and were used for several different texts. The new independent validity of pictorial borders allowed owners of these luxurious devotional manuscripts to delight in their extended imagery, as this attractive leaf bears out.