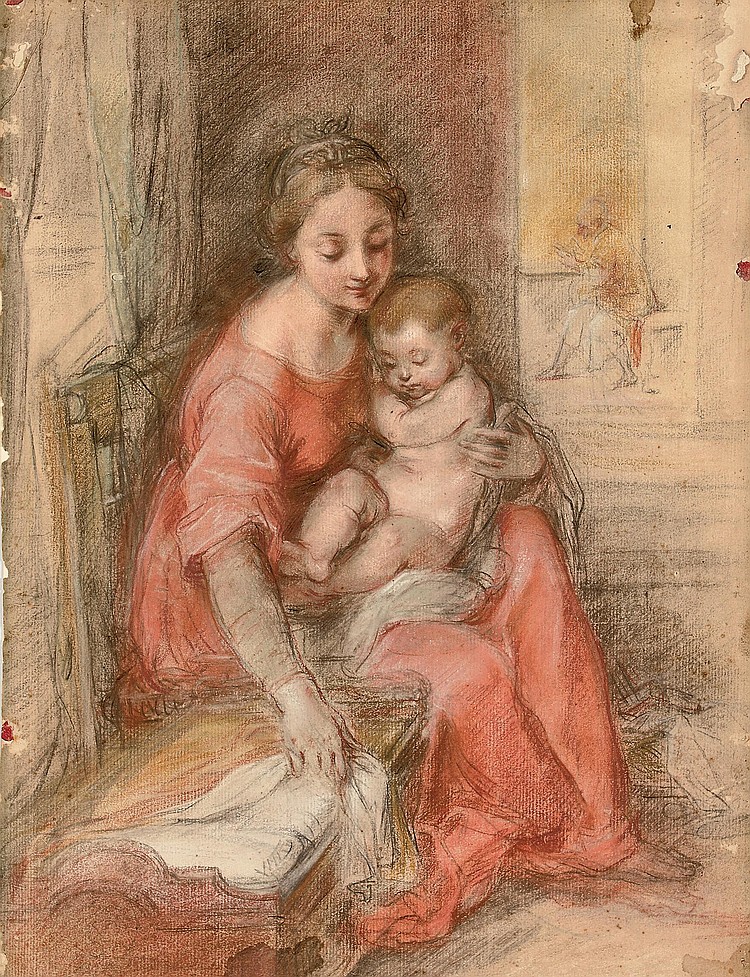 VAT rate of 5% is payable on hammer price and at 17.5% on the buyer's premium.
Please note Payments and Collections will be unavailable on Monday 12th July 2010 due to a major update to the Client Accounting IT system. For further details please call +44 (0) 20 7839 9060 or e-mail [email protected]
This drawing appears to be the final compositional study for Barocci's Albani Madonna (114 x 81 cm.) now in the collection of the Banca Nazionale del Lavoro, Rome (see fig. 1; Emiliani, 2008, no. 87). Executed from circa 1610, for Orazio Albani (1576-1612), the canvas is considered to be Barocci's last work and was left unfinished on his death on 30 September 1612 from an apoplectic fit. The painting was completed by studio assistants.

Federico Barocci, a native of Urbino (where he spent most of his long career), was the most significant artist working in central Italy in the generation between Michelangelo and the Carracci. In addition to presenting the most delicately balanced and profound summation of Mannerist ideals, the colouring and liveliness of his work show him both as the natural heir of High Renaissance masters such as Raphael, whose influence is clearly visible in the present work, and the godfather of Baroque masters such as Rubens and the Carracci, artists who openly expressed their debt to him.

It may seem extraordinary that an artist who allegedly almost died of poisoning in Rome in 1567 and complained of being sick for the remainder of his life went on to live to the then advanced age of 77. He was prodigiously active right up until his death, working mostly on large-scale religious paintings. According to Giovanni Pietro Bellori, Barocci's biographer, the preparation of each of the artist's paintings was an arduous journey, an observation borne out by the large number (nearly 2,000) of his surviving drawings. First, he usually produced sketches (or scarpigni [ lady's elegant shoes] as the artist is alleged to have called them) in pen and brown wash over traces of red or black chalk. He would then execute studies from the studio model mostly in black and white chalk on tinted paper, sometimes with touches of coloured chalks, and then finished compositional sketches ('disegni compiti'), the category in which the present drawing belongs. The penultimate stage in the preparatory process was the making of full-sized cartoons, used as the template for establishing the outlines of the composition. From the full-scale cartoons the artist would then trace the contours of the heads of each of the principal figures on to separate pieces of paper.

Even though the Madonna Albani, a private devotional image, is much smaller in size than most of his other religious paintings, it was still prepared with great care by the artist. Emiliani catalogues fourteen drawings made in preparation for it, from a quick sketch in pen and wash in the Uffizi to the life-size cartoon in a private collection, Milan (Emiliani, 2008, no. 87.3). Between these two stages, Barocci's drawings - in black and white chalk, sometimes with touches of red chalk - concentrate mostly on the position of the Madonna and Child and offer a fascinating insight into the artist's evolving ideas about his composition. The first sketches show only the Madonna and Child, while in subsequent studies appear the chair on which is seated the Virgin and the crib in which she intends, with a very tender gesture, to put the sleeping Child. Unusually, no auxiliary cartoon or elaborate study in coloured chalk of a specific figure or detail survives for the Madonna Albani. The extant drawings for the painting are also characterized by their sketchiness or quickness of execution, and their rough and schematic almost geometric forms.

Traditionally attributed to François Boucher, the present work was rediscovered by Luisa Vertova in the early 1970s (although her article on the work was only published in 1989), and was included in the important Barocci retrospective in Bologna in 1975. Doubted by John Shearman and Edmund Pillsbury in their reviews of the exhibition, the attribution to Barocci of the present drawing is now widely accepted by specialists. Described by Emiliani (2008) as 'di straordinari delicatezza executiva', the drawing was first quickly sketched in black chalk and one can still observe many hesitations and pentimenti. The artist then completely and carefully elaborated his composition in reddish, yellow and white chalks, before retouching some of the contours in a darker red chalk.

In the creative process of the Madonna Albani the present drawing seems directly to follow a quickly-executed drawing in black and white chalk now in the Biblioteca Municipale, Urbania (Emiliani, 1985, no. 944). The position of the Madonna and Child is almost the same as in the present drawing, except that the left arm of the Infant Christ is still outstretched and not bent. Another difference lies in the crib: placed beside to the Madonna in the Urbania drawing, it is at right angles to her both in this compositional drawing and the painting.

Barocci's compositional studies are often executed in pen and ink, wash and heightened with white (sometimes in oil) and those in coloured chalks (a technique the artist mastered in his head studies) are rare. There is the well-known Holy Family with the Infant Saint John and a cat in the British Museum (black and red chalk, heightened with white, some of the outlines indented with a stylus, squared with indented lines; 30 x 23.8 cm.; exhibition catalogue, A Touch of the Divine. Drawings by Federico Barocci in British Collections, Cambridge, The Fitzwilliam Museum, 2006, no. 29), related to a painting in the National Gallery, London (1574-5), and presumably completed in preparation for an engraving executed in 1577 by Cornelis Cort. However one can also cite a sheet in The Pierpont Morgan Library, New York (1978.37; The Graphic Art of Federico Barocci. Selected Drawings and Prints, Cleveland, Museum of Art, 1978, no. 15). It represents the Virgin and Child in a Landscape with kneeling Saint John the Baptist (black, red, ochre and white chalks, over squaring in red and black chalk, incised for transfer, 48.1 x 10.3 cm.) and is a study for a painting (1567) in the Capuchin Church at Crociccia. In addition to fulfilling the usual role of a finished compositional study, the Pierpont Morgan drawing and the present sheet seem to also have been used to study the relationships of colour. Bellori relates that the artist often prepared a small cartoon to investigate the colour juxtapositions after making the full-scale model and this helped when he came to execute the final work. The use of coloured chalks in this drawing has also even more resonance as a record of Barocci's personal vision as the painting was ultimately largely executed by studio assistants.

Apart from the colour of Mary's robe - here all red, but red, blue and white in the Banca Nazionale del Lavoro's canvas - the group of the Madonna and Child is almost identical in this compositional study and the painting but the background is quite different, a pattern that can be observed in most of Barocci's 'disegni compiti'. Unconventionally represented reading in the present drawing, Saint Joseph is shown in the painting in his professional activity working on a wheel aided by a kneeling apprentice. The door of his shop is open and one can distinguish Bramante's tempietto (a building previously represented in the background of Barocci's celebrated Aeneas's Flight from Troy, 1587, in the Galleria Borghese, Rome) in the far background. In this drawing Barocci has used one of the very recognisable window seats from Ducal Palace at Urbino (see fig. 2). The change of iconography might be explained by the identity of the painting's patron, Orazio Albani who was the envoy of the court of Urbino in Rome to negotiate the cession of Urbino's duchy to the papacy.