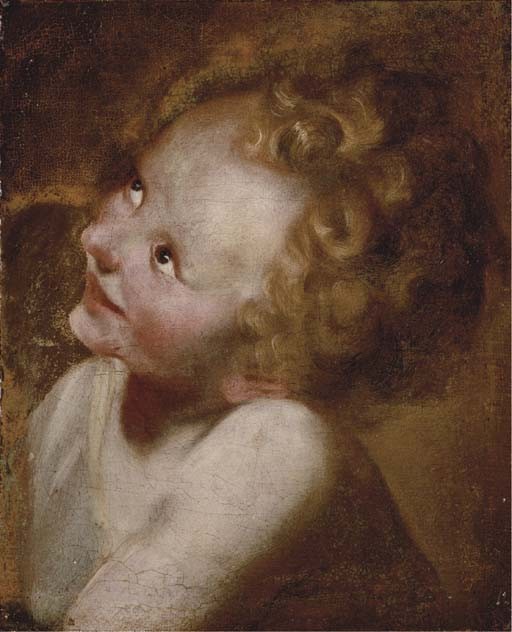 This is a study for the Head of Christ in Barocci's The Rest on the Flight into Egypt, the prime version of which, painted circa 1570-1 for Guidobaldo della Rovere, Duke of Urbino, and then given as a present to Lucrezia d'Este, Duchess of Ferrara, is now untraced. Other versions by Barocci exist in the Church of Santo Stefano, Piobbico, and in the Pinacoteca Vaticana (see A. Emiliani, Federico Barocci, Bologna, 1985, I, pp. 78-9). The composition was highly successful, and in addition to the number of versions that were produced, an engraving was also published by Cornelis Cort in 1575, as well as an anonymous Italian chiaroscuro woodcut (Bartsch XII, 36).

Sixteen preparatory drawings exist for this composition, most in the Uffizi, Florence (Emiliani, op. cit., pp. 80-1). One of the Uffizi's red chalk drawings represents a study of a child's torso that corresponds very closely with the present work (inv. no. 11620 F.), while a pastel study of the Head of Christ can be found in the Albertina, Vienna. Barocci was meticulous in working out every aspect of his composition, and this saw him progress from these preliminary drawings to detailed oil modelli of individual faces, and other key elements, which he may have executed even after he had embarked on the full-scale work. Two other related oil studies on paper for the heads of Christ and Saint Joseph were sold in these Rooms, 10 July 1992, lots 48 and 49.

The attribution of the present work has been confirmed by Professor Andrea Emiliani on the basis of transparencies.