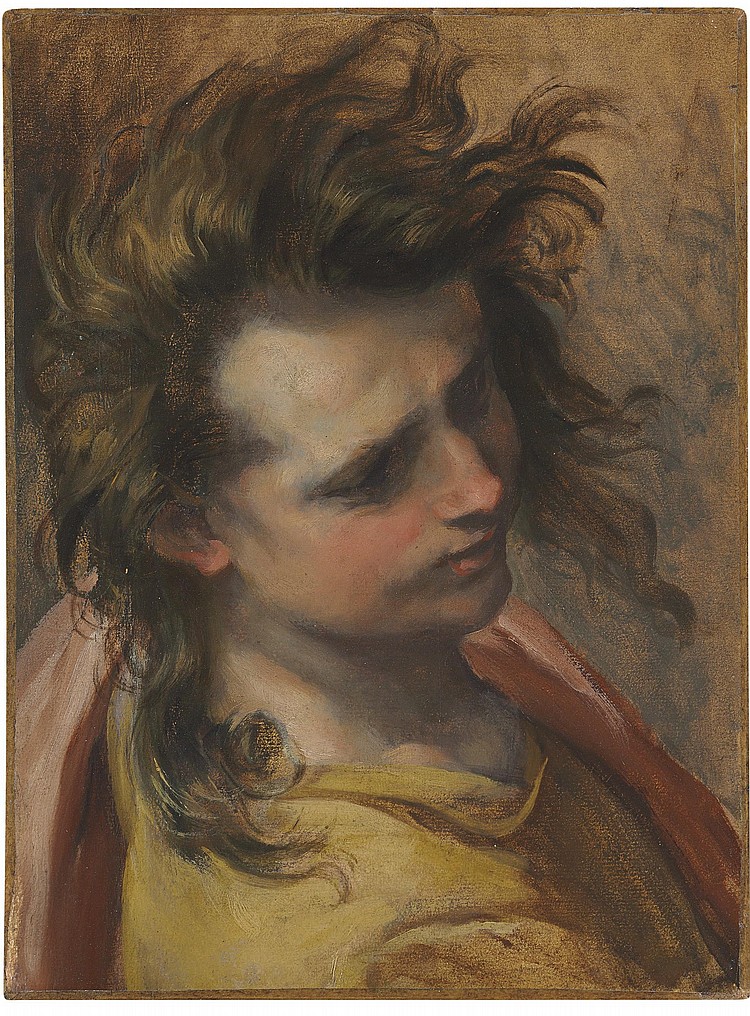 The impressive quantity of extant drawings by Federico Barocci - almost 2000 works - has prompted scholars to explore their relationship to his paintings, in which, it has been noted, "a great majority are connected with his painted compositions, complementing them as well as elucidating the creative process that brought them into being" (N. Turner, Federico Barocci, Paris, 2000, p. 150). The sequence of these preliminary works has been the topic of recent discussion.

This full-scale head study in oil of Head of Saint John the Evangelist was painted by Barocci in the very final preparatory stages for the Senigallia altarpiece, The Entombment of Christ (fig. 1; 295 x 187 cm.). Recently discovered, it can be added to the group of almost thirty preliminary works for the altarpiece, which are considered to be the most impressive grouping of studies for a single painting in his oeuvre. It is a modello, an idea to be transposed to the final painting, and illustrates beautifully how Barocci's "drawings become an extension of the paintings" (op. cit.).

The first few stages of preparatory work are common to most artists - quick sketches, generally executed in pen and brown wash over chalk, capture the initial ideas for the composition. Studies from life for the figures would follow and it is these black and white chalk drawings on tinted paper that constitute the majority of Barocci's graphic output. Detailed studies of specific elements, such as arms, legs, hands, feet and drapery, were made and squared for transfer.

Barocci worked out the lighting and chromatic schemes in compositional sketches, or 'cartoncini'. The 'sketches for chiaroscuro' were, logically, monochromatic works on paper (a study of this type for The Entombment is in the Getty Museum, Los Angeles; inv. 85.GG.26, 47.5 x 37 cm.; previously Chatsworth). The 'sketches for colors' were usually painted on canvas (and include Study for The Entombment in the Galleria Nazionale delle Marche, Urbino and the newly discovered, highly finished study in a Belgian private collection; see N. Turner, op. cit., p. 151). No matter what the support, these works vary in size but were always smaller than the final painting. The artist's system for transferring information between the works using ratios of 1:8 to 1:2 is carefully analyzed by John Marciari and Ian Verstegen in their recent article (see '"Grande quanto l'opera": Size and Scale in Barocci's Drawings', Master Drawings, vol. XLVI, no. 3, Autumn 2008, pp. 291- 321).

Before setting to work on the final canvas Barocci would work out a full-scale cartoon for the painting, the only stage in the process to be produced in a 1:1 ratio. (The largest surviving cartoon by Barocci is the 'reduced cartoon' for The Entombment -- fig. 2; Rijksmuseum, Amsterdam, 113 x 90.4 cm.). The Head of Saint John and similar studies for principle figures in the composition would have been traced from this cartoon onto individual sheets. Marciari and Verstegen emphasize that in the rare cases that a stylus was used for this, the medium -- either pastel or oil -- skips over the incised lines indicating that the contour was transferred to the blank sheets and not from the sheets to the painting or cartoon, proving that these studies were in fact the step between the cartoon and the final canvas. The oil and pastel head studies "are sketchy in their exploration of light and color if not of contour, because this had already been worked out" (op. cit., p. 309). Raphael's 'auxiliary cartoons' are cited as the only known precedents for this practice and it is safe to assume that Barocci knew these from collections in Urbino; this term has been adopted to describe Barocci's colored head studies.

Another full-size version of Head of Saint John the Evangelist is in the National Gallery of Art, Washington D.C. (inv. no. 1979.11.1; c. 1580, oil on paper lined with linen, 42 x 31.7 cm.). Nicholas Turner suggests that the present work is the earlier iteration given the higher degree of spontaneity it possesses, the existence of the two studies being further proof that "Barocci went on refining and improving his compositions and all their elements until he was happy with every last detail". Another comparable study made for The Entombment is Head of a bearded man looking downwards (fig. 3; Metropolitan Museum, New York).

The Entombment of Christ was commissioned from Barocci in 1579 as an altarpiece for the church of Santa Croce in Senigallia, a town set on the Adriatic coast seventy kilometers east of Urbino. This year marked the completion of the Madonna del Popolo for Santa Maria della Misericordia in Arezzo, a project that proved to be both arduous and rewarding for Barocci. The artist was offered the esteemed position of court painter to Franceso I de'Medici in Florence at this time, but refused it on the grounds of his poor heath. By all accounts Barocci was resolved to return to his native Urbino for what are thought of as the mature years of his career, and was obviously pleased to win this project in close-by Senigallia. Work on the altarpiece was completed in 1582 and the painting has remained in situ ever since.

Barocci turned to Raphael's Entombment for inspiration for his altarpiece. He would have known the master's work, then the altarpiece in the Baglioni chapel in San Francesco al Prato, Perugia (Galleria Borghese, Rome), where he resided in 1567-69. Drawings made at the inception of the project, such as Study for Christ (Museo Boymans, Rotterdam, inv. 1-428), show that Barocci initially followed Raphael's composition faithfully, with the sepulcher and action directed to the left. In later sketches Barocci swivels the composition around, setting the main action at an angle, oriented to the right, and rearranging the figures. This was likely done to accommodate the strongly vertical orientation of his altarpiece, but he may have found that it infused the scene with more lively action and a naturalistic telling of the story that was in keeping the new style of painting introduced by Caravaggio and the Carracci in the fervent years of the Counter-Reformation.

The spirit and influence of Raphael are captured by Barocci in the figure of Saint John. Shown as the beautiful youth assisting with bearing the body of Christ in this scene, Raphael's Saint John stands monumental; his head in strong profile anchors the pivotal movement of the shoulders and feet. The exaggerated turn of the shoulders and movement of the feet are direct quotations from Raphael's figure, while the head shares a sense of ideal beauty and gorgeous flying locks. In characteristic form, Barocci chooses to explore this beautiful head in further detail by showing the face in three-quarter view from above, the essence of which is captured in this study.

We are grateful to Andrea Emiliani for confirming the attribution to Barocci, on the basis of photographs (written communication, November 2007). Professor Emiliani dates the work to between 1580-82 and will include it in the 3rd edition of his catalogue raisonné on the artist, which is forthcoming.

We are further grateful to Nicholas Turner for confirming the attribution to Barocci after inspection of the work (written communication, 16 September 2008).