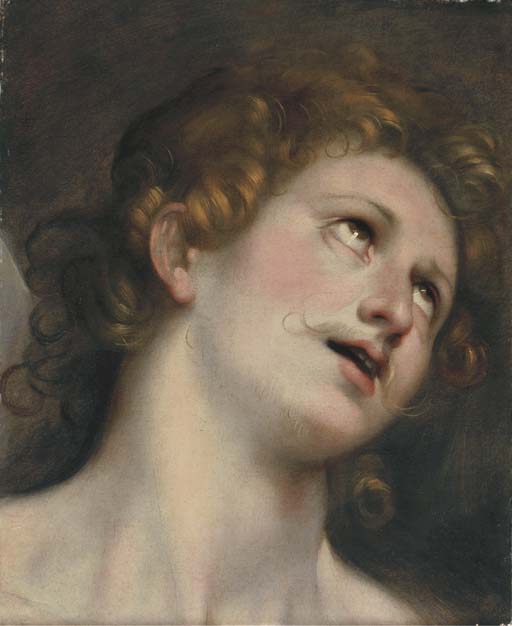 Discovered in 1989, the present picture is a modello for the head of Saint Sebastian from one of Barocci's most important altarpieces, The Crucifixion with the Madonna, Saint John the Evangelist and Saint Sebastian, begun in circa 1590 for Matteo Senarega's chapel in the Cathedral of Genoa (see fig. 1). Upon its completion in 1596, Senarega wrote to the artist complaining that 'this painting has but one defect: because it is almost divine, human praises cannot do it justice...in Saint Sebastian one sees the true colours and rythms of art, to a degree that perhaps the ancients never attained, much less the moderns; and as a whole, the work is so rich in artifice and grace that it does not leave room for anything but a desire to imitate it' (see G.P. Bellori, Le vite di pittori, scultori, ed architetti moderni, Rome, 1672, p. 183-85).

The Senarega chapel is dedicated to Saint Sebastian and Barocci evidently attached great importance to the depiction of the saint within the composition as a whole. This is attested to by the large number of preparatory drawings for the figure (see A. Emiliani, Federico Barocci, Bologna, 1985, II, pp. 312-313).

Oil studies by Barocci are rare. Fourteen were recorded in the artist's posthumous inventory, but by 1975 only five had been re-discovered (see E. Pillsbury, 'The oil sketches of Federico Barocci', Apollo, 108, 1975, pp. 170-73). In the present work, the contours of the face have been incised, some of which are visible through the paint, indicating that Barocci transferred the design from a full-scale cartoon. This conforms with Dr Edmund Pillsbury's view that oil sketches such as these were executed after Barocci had already begun work on the final painting (loc. cit.).