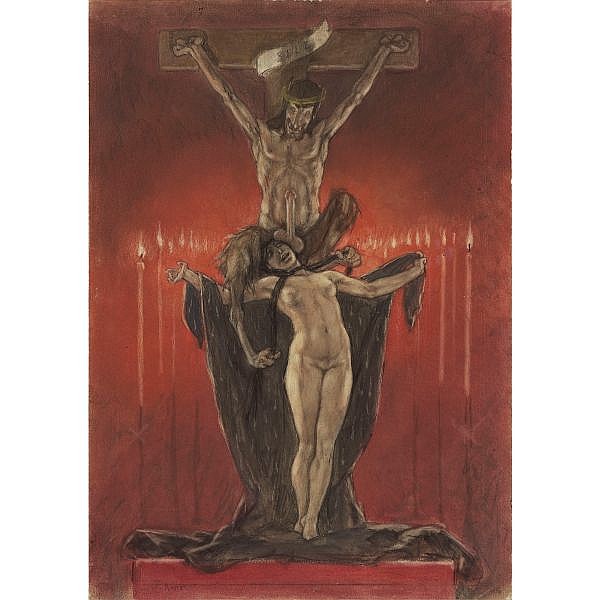 Acquired by the grandparents of the present owner; thence by descent

PROPERTY FROM A PRIVATE COLLECTION, FRANCE
Executed in 1882, at the pinnacle of his career, the present work is the original watercolour of Le Calvaire from the series Les Sataniques (see also introduction to lots 288-291 on the preceding page). Once characterized as a 'painter who paints phalluses the way others paint landscapes' (Félix Fénéon, Petit Bottin des Lettres et des Arts, 1886), Rops' reputation today as artist of the perverse derives from his many images of satanic worship and different forms of sexual practice. The unconventional Rops liked to shock both through his oeuvre and unconventional lifestyle. He was known on occasion to receive visitors in the nude, and at a time when women were supposed to be pure, docile and 'virtuous', and artists to 'renounce the flesh', Rops went against social conventions by separating from his wife and living happily for nearly thirty years in a ménage à trois with the sisters Léontine and Aurélie Duluc.

Rops felt profoundly stifled by the conservative mores of his time. His images subsequently often rebelled against and portrayed what he perceived as the hypocrisy of the middle-classes and the social conventions of his time. In letters written to his friends, Rops clarified that the woman descending into satanism in Les Sataniques was 'a bourgeoise, the false woman of our era'. Like many artists of the time, Rops believed in the importance of being of one's time and depicting 'modernity'. He outlined this thought in a letter to his friend and patron Edmund Picard: 'when I say that a painter must be of his time, I believe that he must above all else paint the character, the moral sentiment, the passions and the psychological impressions of the time' (18 March 1878). Rops' depictions of Satanism were thus a means to depict modernity, to break taboos, and to express his disgust with the bourgeoisie and its values.

The myth of the satanic woman, responsible for the fall of humanity, haunted the imagination of artists at the fin-de-siècle. The woman, henchman and accomplice of the devil, became the symbol of perversity, the image of the guilty flesh. Many of Rops' images that depict prostitutes or debauched women can be understood in the context of the nineteenth century concept of the femme fatale. In Le Calvaire, Satan has taken the place of Christ at the cross. The woman giving in to her lust ultimately has to die - here she is strangled by Satan with her own hair. While Rops' many depictions of prostitutes portrayed them as bearers of disease and death, who with their wiles lead their victims to an untimely and painful death, he has reversed these roles in Le Calvaire, where Woman becomes the victim of Satan and her own lust.

Rops did not consider himself a pornographic artist. When asked by a journalist for permission to include him in a book he was writing on pornography, Rops replied: 'I thank you for your intentions, but if, as you believe, I have ever made some smutty drawings, it is precisely in hatred of this public of which you speak, and in order to lower my buttocks to the level of its face' (quoted in Victor Arwas, Félicien Rops, London, 1972, p. 7). That being misunderstood as a pornographic artist was a concern of Rops is furthermore evident from a response of Edmund Picard to one of his letters: 'Alas, excellent friend, you must resign yourself; to the vulgum pectus, unfit to distangle your powerful and cruel art, you risk being seen as nothing more than a pornographer' (Edmund Picard, letter to Rops, cited by Camille Lemonnier, Felicien Rops, l'homme et l'artiste, Paris, 1908, p. 168). While Rops images set out to shock and terrify the viewer, there is also an element of tongue in cheek in some of these images. Satan's testicles sitting atop the woman's face like a béret in the present work, for example, are more comical than fightening.