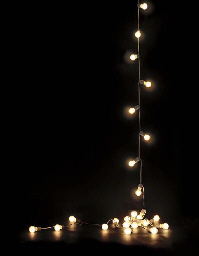 Untitled one white extension cord, 44 feet (13.4 meters) long, on which are attached 24 light bulbs (Phillips, 25 watt, inside frosted, standard base) in white porcelain light sockets placed at intervals of one foot (30.5 cm.) apart from each other with 20 extra feet (6.1 meters) of cord at end closest to plug overall dimensions vary with installation Executed in 1992, this work is number two from an edition of two PROVENANCE Andrea Rosen Gallery, New York, (ARG# GF 1992-6.2). Marieluise Hessel, Wilson/Wyoming. Andrea Rosen Gallery, New York. Acquired from the above by the present owner in 1994. LITERATURE E. Troncy, Felix Gonzalez-Torres. Placebo., in: Art Press, June 1993 (another from the edition illustrated, p. E19). The Ellyn and Saul Dennison Collection, Morristown, The Morris Musuem, 1993 (another from the edition illustrated, p. 45). N. Spector, Felix Gonzalez-Torres, in: Felix Gonzalez-Torres, New York, Solomon R. Guggenheim Museum, 1995 (another from the edition illustrated, p. 185) L. Baltz, Felix Gonzalez-Torres, in: l'architecture d'aujourd'hui, September 1996 (another from the edition illustrated, p. 14). D. Elger, Felix Gonzalez-Torres. Catalogue Raisonn‚, Ostfildern-Ruit 1997, no. 186 (another from the edition illustrated in colour, p. 99). NOTES This work is accompanied by a certificate of authenticity dated 8-1- 94 and signed by the artist and Andrea Rosen. As the owner is an integral part of this work, it is the artist's intention that a new certificate of authenticity and ownership is issued stating the new owner's name, in addition to the current certificate of authenticity which accompanies this work. The Estate of Felix Gonzalez-Torres will provide this new certificate. Untitled is one of a series of light strings that Felix Gonzalez-Torres made in 1992. The basic function of the work is to illuminate and literally brighten its environment as is often done at dances, parties and celebrations particularly in the artist's homeland of Cuba. Gonzalez-Torres' intention with these simple, inanimate but illuminating works has also been to humanise these minimalist-looking objects by drawing a parallel between their function and that of a friend or lover who can also bring light, joy and optimism into another person's life. Realising that the light and warmth of their glow, along with their all-too-evident fragility, makes these light bulbs an eloquent metaphor for a gentle humanity. Gonzalez-Torres began the light-strings in 1991, the year of his lover Ross Laycock's death. The first of these works was titled Untitled (March 5th) - the subtitle of which refers to Laycock's birthday - and consisted of two bare light bulbs suspended from extension cords and entwined like a pair of lovers huddling together in the dark. Implicit within this work is the notion that one of the bulbs will inevitably dim and fade before the other, ultimately leaving it to shine alone. From this work Gonzalez-Torres conceived the idea of the series of light-strings. In these works, however, instead of creating a metaphor related to his own life, Gonzalez-Torres, who was at heart a quiet revolutionary, aimed to spread this image of humanity and to illuminate the lives of his audience by stimulating their own creativity. Establishing an interaction and interdependency between himself, the work and the viewer in much the same way as he had done in the creation of his paper stacks or his candy spills, he consciously decided to leave all aesthetic decisions in the display of the artwork up to the viewer. "I don't necessarily know how these pieces are best displayed," he explained." I don't have all the answers - you decide how you want it done. Whatever you want to do try it. This is not some Minimalist artwork that has to be exactly two inches to the left and six inches down. Play with it please. Have fun. Give yourself that freedom. Put my creativity into question, minimise the preciousness of the piece. It is much easier and safer for an artist to frame something. There is meaning, as we know, in everything we do. And there is meaning in having a black-and-white photograph framed in Plexiglas on the wall. No one can touch it. No one can change it. Again, it's about putting myself in a position where I am confronting my own fears." (F. Gonzalez-Torres, in: Felix Gonzalez-Torres, exh. cat. Solomon R, Guggenheim Museum, New York 1995, p. 191.).