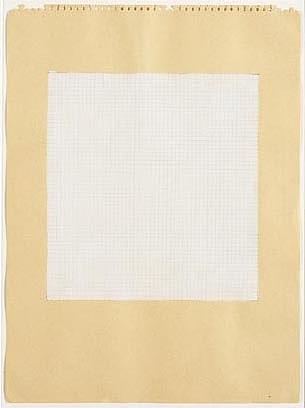 FELIX GONZALEZ-TORRES
(1957-1996)
Untitled (T-Cell Count)
signed, titled and dated 1990 NYC on the reverse
graphite, colored pencil and gouache on paper
19 by 15 in. 48.3 by 38.1 cm.
PROVENANCE
Andrea Rosen Gallery, New York (ARG #GF 1990-27)
Simon Watson Gallery, New York
Acquired by the present owner from the above in 1991
EXHIBITED
New York, Simon Watson Gallery, Mapping the Body, February-March 1991
Madrid, Museo Nacional Centro de Arte Reina Sofia, No es solo lo que ves: oervirtiendo el miminalismo, December 2000-February 2001, p. 84, illustrated in color
LITERATURE
Dietmar Elger, Felix Gonzalez-Torres: Catalogue RaisonnE, 1997, p. 57, cat. no. 98, illustrated
266Gonzalez-Torres's work invites the viewer into the artist's personal world, exposing his vulnerability. In Untitled (T-Cell Count), 1990, the fundamental fragility of his lover's life is abstracted, as it is plotted onto a grid. This graph, this whisper of a line, charts the development of the AIDS virus within the artist's partner's body, within his blood.
"It was this that struck me when I first saw an extensive bloodwork done on Ross [the artist's partner] in the form of numbers and codes. I said to him, 'Honey, this is your blood. Right here. This is it.' There was not a drop of blood there. There wasn't anything red. And it was even more frightening because all the numbers could be easily reversed. It is a total abstraction; but it is the body. It is your life." (Spector, Nancy (HG.), 1995, Felix Gonzalez-Torres, New York: The Solomon R. Guggenheim Museum)
It is tempting to read this delicate drawing formally, as Gonzalez-Torres's use of the grid echoes the fragile beauty of Agnes Martin's classic sixties works on hand-graphed paper. And yet, Untitled (T-Cell Count) is neither emotionally benign, nor systematic; rather, it is a poignant representation of a human life.