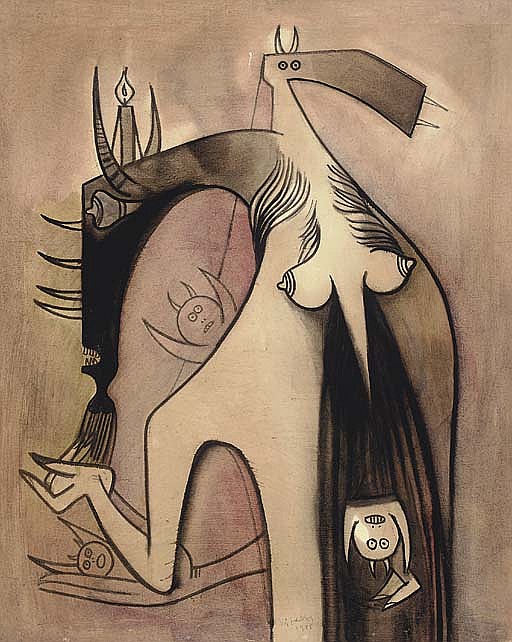 PROPERTY FROM THE COLLECTION OF ALAN N. COHEN AND CAROL F. COHEN


In 1942, Lam returned to Havana after an extended stay in Europe. The work he created upon his return to the island, particularly between 1942 and 1950, are among the most fascinating examples of the syncretic nature of imagery in his paintings. During his tenure in Paris, he had studied with Picasso and also became acquainted with the Surrealists and with West African masks. While Picasso's influence is undoubtedly visible in Lam's paintings, it is the artist's undeniably Cuban subject matter that marks works like Femme Cheval (1948) as significant objects in his works from this period. Illustrating his interpretations of various aspects of Cuban culture as well as the political situation in which Cuba found itself at mid-century, Lam's images combine School of Paris stylistic elements with scenes borrowed from the Cuban countryside.

During this early period of production upon his return to Havana, Lam used a number of signifiers to which he turned most frequently in his paintings: female bodies, abundant vegetation and the rites and rituals of Santería (now Lucumí) as practiced in Havana and filtered through a visit to Haiti in 1945. Taking various forms, these elements make their appearance with African-derived objects in numerous works between 1940 and 1950. The black female body, in particular, is significant for the varied ways in which it is configured by Lam. Hybridized with fruit, sugar cane, jungle vegetation, African masks, horses and other creatures, the body of the female figure in Lam's often can be read as his ultimate signifier for Cuba during this period.

Figures with horns, horses, women's bodies and various hybridizations of these elements appear frequently during this period. Following his monumental The Jungle (1943), Lam made a series of works in which single figures or a smaller grouping of figures is the central occupant of the otherwise empty space. This reduction in the background adds a stage-like space and a baroque quality to this period of works. On these stages, the figures embody players in rituals culled from the vast repertoire of Santería or Lucumí ceremonies. Figures are adorned with prominent genitalia in allusion to fertility rites. They are also frequently presented with forms that are reminscent of African masks and sculpture. Elongated faces and limbs, enlarged breasts and scrotums are typical elements found in works from this period.

In particular, the femme-cheval is a figure that the artist often featured. This depiction alludes to the figure of a horse-headed woman known from Santería or Lucumí rites in which a devotée is "ridden" by the spirit much like one would ride a horse. Posessing the body of the believer, the orisha rides the figure, transforming it into a creature that is part human, part horse and, in some cases, part vegetation. In this image, the femme-cheval bears a long, resplendent tail topped by two mango-like breasts and a thick mane. Double headed, her larger head again features a breast and a testicle-chin, a device the artist used to suggest the literal metamorphosis of the body into a fecund spirit. In addition, three small heads in the work suggest the presence of Eleggua, the spirit guardian of doorways and crossroads.

The femme-cheval is a figure that will continue to appear in Lam's work. This 1948 work features a number of elements that will eventually be exaggerated or reduced in varying degrees or eliminated altogether. The teeth seen in her mouth eventually become large tusks. The breast-eye motif of this work is eventually reduced until the eyes are entirely vacant. Even as soon as 1950, Lam's femme-cheval figures will feature heads with a more minimalist form and fewer references to individual features, as in Zambezia, Zambezia, (1950) from the Solomon R. Guggenheim Museum's permanent collection. This work is an excellent example of this portrait type that Lam cultivated throughout his oeuvre.