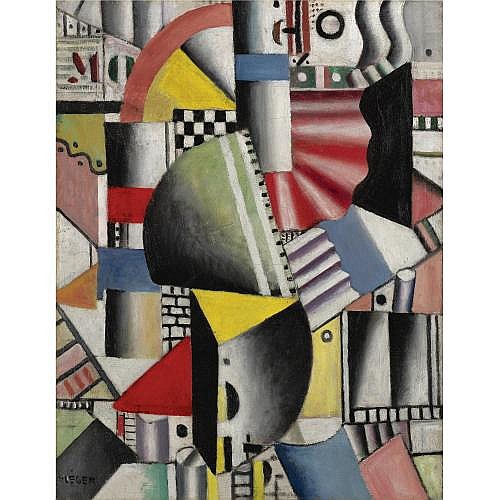 Solomon R. Guggenheim, New York (by 1938 and until at least 1958)Stephan Hahn, New YorkGalerie des Maîtres, ZugAcquired from the above on November 12, 1968


Les Usines is LÃ©ger's pictorial exaltation of the modern age. Created shortly after the end of the First World War, it is a gleaming symbol of technological progress in an age of rapid industrialization. At the time LÃ©ger painted this work, the prevailing philosophy in war-torn Europe was focused on the rebuilding of nations. The theme of a factory Â? the center of industrialization Â? was the perfect incarnation of this sentiment, and LÃ©ger has rendered it here with a sense of robustness befitting the energy and determination of the time (see fig. 1).

The composition is painted with a vibrant palette of primary colors that LÃ©ger carried over from the Contraste de Formes series that had occupied him during the war (see fig. 2). The aesthetic of Les Usines, though, is much more representational than any of his pre-war pictures. After witnessing the atrocities of battle and the brutal destruction of the familiar world, LÃ©ger felt that abstraction was no longer an appropriate style for his art. Instead, he began to concentrate much more on identifiable forms, like the towering smoke stack here that rises from the center of the composition. Although this picture is by no means a realistic representation of its subject matter, it is filled with elements that all appear to be in motion Â? like the smoke plumes in he upper right corner Â? and that conveying the sense of production. Years later, he would explain this change in his artistic priorities: Â?It was those four years [of World War I] which threw me suddenly into a blinding reality that was entirely new to meÂ? Suddenly I found myself on an equal footing with the whole French people. Posted to the sappers, my new comrades were miners, laborers, artisans who worked in wood or metal. I discovered the people of France. And at the same time I was suddenly stunned by the sight of the open breach of a .75 cannon in full sunlight, confronted with the play of light on white metal. It needed nothing more than this for me to forget the abstract art of 1912-13Â? (Fernand LÃ©ger, in Arts, Paris, 1949).

Les Usines is among a series of works from the immediate post-war period that include Le Moteur, LÂ?Horloge (see fig. 3), Les HÃ©lices, Les Pistons, La Gare, and La Ville (see fig. 4). These compositions inherit the stylistic legacy of Synthetic Cubism and also incorporate the dynamism and energy that was concurrently being expressed in Italian Futurist art. In these vibrant compositions LÃ©ger showed his ability to work on a monumental scale, maintaining a fine balance between the abstract strength of the Contraste de formes series and references to contemporary urban life. When he was painting these pictures LÃ©ger was bearing witness to the production of a new society, and the factory was perhaps the best symbol of this spectacle.

In the present work, the environment of the factory consists of many abstract forms, vertical, horizontal and diagonal bands of color, spheres and less clearly definable shapes that coexist with glimpses of modern urban architecture. The resulting aesthetic is a bold statement that has come to encapsulate the style of post-war Paris. The work of this period has been memorably described by John Golding: Â?Now, at the height of his powers, he rendered architectural the compositional effects of synthetic Cubism to give definitive form to all that had been most positive, from a visual point of view, in the Futurist programme ... From synthetic Cubism LÃ©ger adapted a form of composition that relied for its effects on a surface organization in terms of predominantly upright, vertical areas, often tendered now in unmodulated colour. Mechanical, tubular forms, like great shafts of metal, appear with frequency, but these are now tied into, and indeed made subsidiary to a flatter treatment of the picture surface; the colored shapes tip and tilt, fanning out towards the edges of the canvas, only to meet opposing forces which tie them back again tightly into the overall, jazz-like rhythms of the composition. The bright raw colours call to each other across the surface of the canvas, pulling it taut like a drum. The vitality of the forms is such that at times they appear to advance towards us, so that we seem to share, palpably, in the paintingÂ?s beat. Some areas become cells in space, in which we glimpse the life of the cityÂ?s inhabitants; others are broken by letters, like fragments of giant billboards, while their harsh, dry imagery is thrown into relief by the contrasting, swirling, circular bands of colour. Never has the poetry of the first machine age been so grandly and proudly exaltedÂ? (John Golding, Â?LÃ©ger and the Heroism of Modern Life,Â? in LÃ©ger and Purist Paris (exhibition catalogue), The Tate Gallery, London, 1970-71, p. 12).