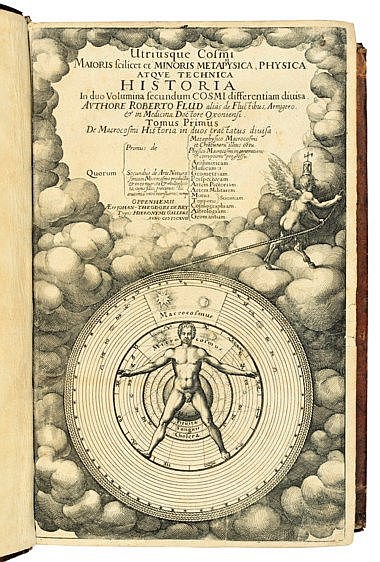 First edition of Fludd’s mystic masterpiece, richly illustrated with designs attributed to de Bry, Merian and Fludd. The Cosmi maioris is ‘an encyclopedia of all things regarded from an occult Rosicrucian point of view. The first part presents an illustrated history of creation, from the void (represented by an engraving from an entirely blackened plate) through the process of distillation by which Fludd believes the world to have been created. The second tractate takes up, in turn, occult mathematics, occult harmonics and music theory, occult theories of vision and optics, and even, at great length and with numerous plates, the occult theory of fortification and military strategy’ (Alchemy: A Comprehensive Bibliography of The Manly P. Hall Collection, p. 80). Wellcome I, 2324.