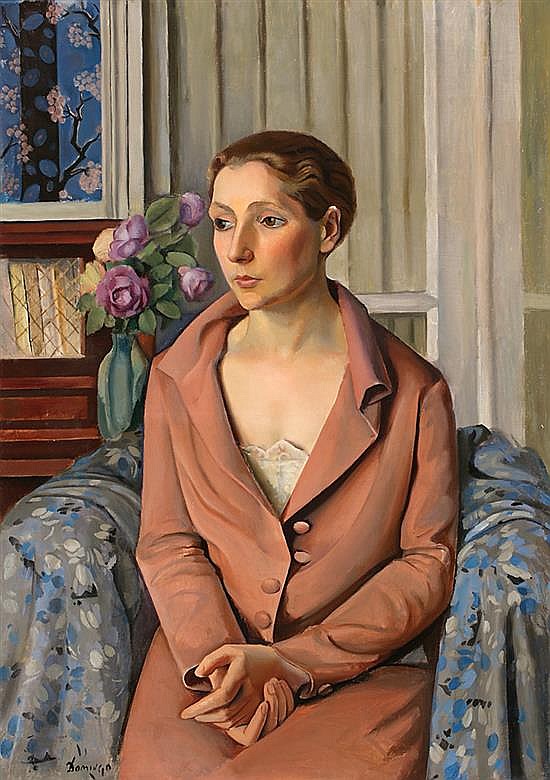 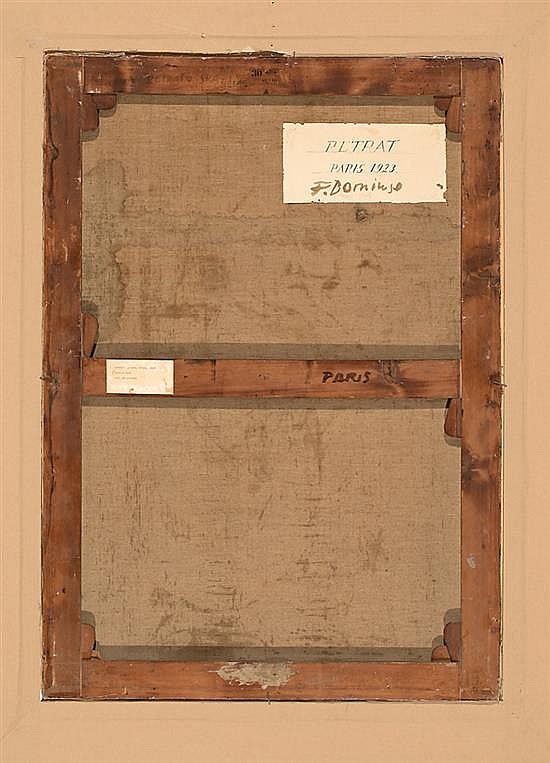 Francesc Domingo SeguraBarcelona 1893 - Sao Paulo 1974 Portrait of Emília Cornet, wife of Feliu EliasOil on canvasSigned. Located and dated in Paris in 1923 in a label at the back; in another label, it is indicated that it comes from the artist's private collection. Literature: Jaume Pla, "Francesc Domingo", Sabadell, Ausa, 1992, p. 32 (reproduced) 92,5x65,7 cm

The Buyer agrees to pay a buyer's premium on the hammer price of each lot purchased.The buyer's premium is 24,2% including Balclis Premium (17%), Internet fee (3%) and VAT.
(Spanish VAT is 21% on top of Premium´s commission -Balclis and Internet commissions - not on the Hammer Price). Auction House will help arrange shipment, at buyer's expense

Conditions of Bids
Art. 1 The Auction House's Activity
The Balclis Auction House promotes and facilitates sales at public and voluntary auction of the artistic goods and objects, or of a similar nature, that are entrusted to it for this purpose. The House acts as a mediator between the owner and the buyer of each lot. In its role as a mediator, the House will comply, in the auctioning of objects and works of art that are given to it for this task, with the rules and regulations in force, and with the commercial customs by which these kinds of operations have traditionally been governed.

Art. 2 Condition of the lots
The lots will be auctioned in the condition that they are presently in. The House will not accept any claims over restorations, breakages and other damage, even though they have not been mentioned in the catalogue. The purpose of the exhibition of the lots prior to auction is to enable buyers to examine and study them perfectly. The objects that are to be auctioned may be examined during the days leading up to the auction in the hall itself.

Art. 3 Data in the catalogue
The data contained in this catalogue - relative to authorship, origin, antiquity, provenance and condition - are included after careful investigation, verification and advice, although with respect to their final exactitude the House does not accept any responsibility whatsoever. Interested parties must form their own opinions with respect to the pieces during the days prior to auction. Valuation is done in the most faithful and good understanding. Nevertheless, the sale of a lot will be rescinded and its price refunded to the buyer if within the fifteen days after the auction the latter notifies Balclis in writing that the lot purchased is a deliberate forgery and he/she irrefutably proves this to be so.

Art. 4 Weight, measurements, colour, purity and working of the lots
All the weights and measurements of the gems are approximate, due to the impossibility of taking exact measurements due to the setting or design of the jewel. The colour and purity of set diamonds will be indicated for guidance only, as their full determination may only be performed once they have been removed from their setting (Article 7, Section 1 of the CIBJO nomenclature). The wrist and pocket watches included in this catalogue work unless "check necessary" is expressly indicated. Likewise, the measurements of the items of furniture and objects are stated as precisely as possible, but due to the formal characteristics of many of them, they have to be approximate.

Art. 5 Information and advice services
During the exhibition period, Balclis places at the disposal of visitors to the House an advisory service to inform them about the state of preservation of the piece, the maker or artist, market prices or any other data available about all the lots included in the auction catalogue. The advice given will be the House's reasonable and prudent opinion, through it will not accept any responsibility whatsoever with regard to the content of the information.

Art. 6 Legal provisions
The buyer shall comply with what is stipulated in the current laws, in particular the Patrimony Law, the General Tax Law and the Copyright Law. The operations in which the House takes part, with regard to their legal description and consequent effects, are subject to the provisions of Spanish Law and more specifically to the stipulations regulating mediation and bailment agreements. In the event of disagreements between the parties due to the auction operations, the vendor, the buyer and the House, expressly waiving any other jurisdiction to which they might be entitled, shall submit themselves to the jurisdiction of the Courts and Tribunals of Barcelona.

ABOUT THE AUCTION
Art. 7 Auctioneer and Auction Clerk
The Auctioneer will be assisted by an Auction Clerk who will bid on behalf of the offers received in writing, by telephone or by any other means accepted by the House. In the bids received in writing before the auction is held, the offers shall be defended up to the maximum amount set by the bidder, although the lots will be sold at the lowest price possible.

Art. 8 Starting price
In every auction the initial sale price for every object or work of art will be announced in the catalogue. This will constitute the minimum sale price, apart from exceptional cases where a reserve can be agreed with the vendor.

The House reserves the right to change this bidding system in specific cases, and to reject any bid without the need to give reasons.

Art. 10 Selling of lots
The lots will be sold to the highest bidder. In the event of disagreement between two or more bidders over the sum that has constituted the highest bid, the Auctioneer shall have the power to sell the lot to the person who, in his exclusive opinion, he thinks is appropriate, or to decide to auction the said lot again in the same session or in the one immediately following. If two or more offers made in writing are the same, the one received first, by order of date and time, will prevail. Offers received by telephone will be given the same consideration as bids made in the House. The House can make offers on behalf of people not present at the auction and accept telephone offers, but it cannot be held responsible for any error or omission that may occur in the course of them.

When he/she makes a telephone bid, the bidder accepts the lot's starting price.

Art. 11 Transportation costs
Should the buyer request the House to dispatch the objects, the costs of this service will be paid for by the former. Any damage that may be caused during transportation will also be the buyer's exclusive responsibility. The current charges for this service may be consulted in the House beforehand. The insurance covering possible damage caused during transportation will be paid for by the buyer. Once the objects leave the House, Balclis will accept no responsibility for their condition.

Art. 12 Checking the lots
During the period when the lots are exhibited on Balclis's premises, anyone who wishes to take part in the auction will have the right to check for themselves, or through the experts that they deem appropriate, the attribution, the authenticity, the period, the condition and any other details of the piece to be auctioned. No claims whatsoever will be accepted after purchase over restorations or damage, even though they have not been mentioned in the catalogue.

Art. 13 References
Balclis reserves the right to ask for references from anyone who intends to take part in an auction as a bidder. Likewise, it will be able to request from bidders, whenever it deems it necessary, bank references or other kinds of guarantees including an active Visa card. If it is the first time that they are accredited to take part in the auction, whether in the House or via offers in writing and by telephone, they will have to show their DNI or CIF in the House, or send us a copy of it previously via fax or email. The details that participants leave when they accredit themselves in the House or when they leave their offer will be the same that appear on the purchase invoice, there being no possibility of changing them: the details of the bidder or accredited person must be the same as those of the person whose name is on the invoice.

Art. 14 Payments
The buyer shall pay the price of the lots purchased from the day after the auction is held and within a period of no more than 10 days. The sale price of a lot shall be increased by 17%, the House's rights or commission for its mediation in the operation, plus the current rate of VAT (IVA) payable on this commission. If the sale price and the corresponding commission have not been paid by the buyer within 25 days of the auction, the House will use every means at its disposal with the aim of being paid the outstanding sums and shall inform the vendor of this. If these measures are not satisfactory, the vendor may choose to auction the object again or to begin proceedings prior to legal action, conferring his/her representation upon the House and its lawyers to make the appropriate legal claim. All costs and compensation that may result from the legal claim will be paid for by the assignor. Balclis will be authorized to withhold the objects sold until all the sums owing to it have been paid in full by bank transfer or in cash, and until the buyer has satisfied any other terms that, at its complete discretion, the House may request. Subject to the above-mentioned requirements, the buyer shall collect the lots purchased within a maximum period of 10 days from the day after the auction.

Art. 15. Sending an offer sheet
If you wish to bid using our webpage, you have to send us a bid sheet. For this, you must register as a user, after first reading the bidding rules and the Terms and Conditions.

To access the offer sheet you must be registered. If you are already, enter your "user name" and "password". This will ensure the privacy and authenticity of your bids.

Any information or personal data that you provide us with will be treated according to what is stipulated in the Privacy Policy. By using this webpage you consent to their processing and declare that the said information or data are truthful and correspond to the facts.

Once you have sent the sheet, Balclis will confirm by email that your bids have been approved.

As a user, you can modify your data and consult all the updated information referring to your bids.

Once you are registered, you undertake to use the resources of the Balclis webpage, Balclis.com, for the purpose for which they were created, and to act in accordance with the legislation currently in force, respecting the privacy policy and the moral nature of the page. In the event of any breach of the Terms and Conditions, Balclis has the right to close your account without prior warning.

Art. 16 Data Protection Law
In compliance with Organic Law 15/1999, 13th December, of Personal Data Protection, the customer authorizes Balclis to incorporate his/her details in a customer file for the purpose of managing and providing information about its auctions. The customer may exercise the right of access, rectification or cancellation of his/her personal details by sending the appropriate request by post to Balclis Barcelona, Rosselló, 227, bajos, 08008 Barcelona; by fax to 932 171 092; or by email to [email protected]

Art. 17 Acceptance of conditions
Any form of participation in the auction entails complete acceptance of these rules.

The Buyer agrees to pay a buyer's premium on the hammer price of each lot purchased.The buyer's premium is 24,2% including Balclis Premium (17%), Internet fee (3%) and VAT.
(Spanish VAT is 21% on top of Premium´s commission -Balclis and Internet commissions - not on the Hammer Price). Auction House will help arrange shipment, at buyer's expense