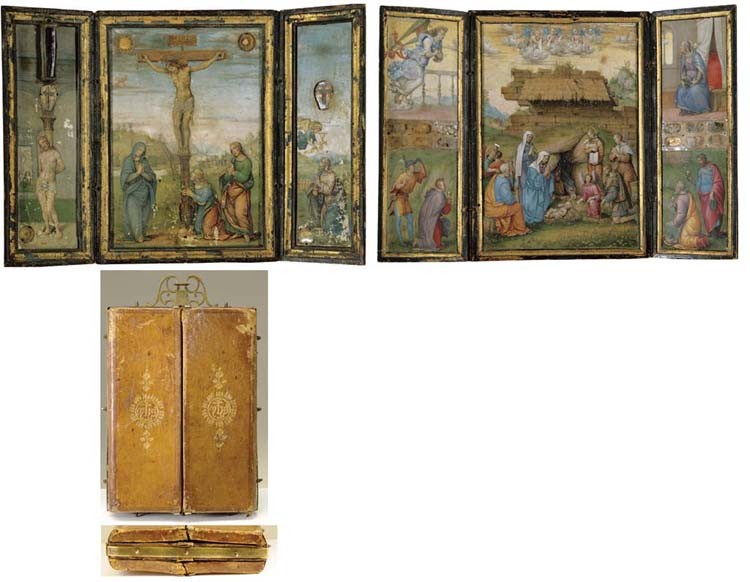 A double-sided portable reliquary depicting The Adoration of the Shepherds (recto) with The Annunciation on the wings; and The Crucifixion (verso) with Scenes from the Stations of the Cross on the wings
bodycolor on vellum, set into a double-sided bound triptych
8 1/4 x 11 3/4 in. (21 x 29.9 cm.), overall size with wings open

In this remarkable reliquary, Franciabigio has assembled a double-sided triptych representing scenes from the life and death of Christ, now encased in a later addition leather and brass frame. The organization of the front panels is particularly unusual, as the central panel and bottom parts of the wings together depict the Adoration, while the top parts of the wings represent the Annunciation. The Adoration group, with the Holy Family, shepherds, three kings, and Saints Elizabeth and Agnes (holding a lamb, the symbol of her martyrdom as well as Christ's sacrifice) gathers around the Christ Child, who lies on a bed fashioned from bundles of hay. Above them in the sky, a host of winged cherubs hovers. Franciabigio enhances his narrative with the addition of tiny peripheral episodes surrounding the Adoration: in the distance on the left, a procession on horseback representing the arrival of the three kings makes its way toward Bethlehem, while at right, an angel appears in a burst of light to announce the birth of Christ to the shepherds tending their flock on the hilltop. It is a testament to Franciabigio's skill as a miniaturist that we are able to read the shepherds' wonder and awe at the heavenly vision even in figures barely two millimeters tall.

The composition of the Annunciation is split in order to frame the central narrative, but is arranged so that the landscape appears contiguous. The Angel Gabriel, at left, is set against a glowing yellow sky and distant blue mountain range that correspond exactly to the background of the Adoration. At right, the Virgin is startled from her book by the sudden arrival of a dove through her open window, which also reveals pale yellow clouds through the arched aperture. On the base of the bed behind her, the letters 'MDX' record the year of the reliquary's creation as 1510.

The reverse side of the reliquary, which also opens to a triptych, depicts scenes from the death of Christ. The central panel features the Crucifixion: at the foot of the cross, the Virgin and Saint John stand with hands clasped in quiet sorrow, while Mary Magdalene, kneeling, embraces the cross with eyes cast upward toward the Saviour. The mountainous landscape background resembles that of the Adoration, with, as before, a tiny related episode in the background: here it is the Resurrection, with Christ in the act of stepping out of his tomb, to the astonishment of Pilate's host of guards. On the left wing, Christ stands tied to the column awaiting the flagellation and the crowning with thorns. At right, the artist has depicted the Agony in the Garden, where Christ kneels before an angel who appears bearing the chalice and communion wafer.

According to Mr. Everett Fahy, who fully endorses the attribution to Franciabigio having inspected the original, the archaic tone of the compositions is characteristic of works produced for Savonarolan sympathizers in Florence in the early part of the sixteenth century. It can be compared to the small tabernacle by Granacci in the Metropolitan Museum (on loan from a private collection) and to the small Annunciation of 1508 by Lorenzo di Credi in the collection of the Fogg Art Museum, Cambridge, Massachusetts. Other works representative of this trend include the small tabernacle of 1510 by Franciabigio's teacher, Albertinelli (Museo Poldo-Pezzoli, Milan), and the best-known example, Botticelli's Mystic Nativity (National Gallery, London). The present work can also be compared to another painting by Franciabigio, a version of the Adoration of the Shepherds (Uffizi, Florence, also dated to 1510, on the frame below). As in our reliquary, there is a tender mood and a delight in the tiniest of details - a lone traveler on a path, a flock of miniature sheep on a hillside - as well as a fascination with the precision of the brushstrokes. Indeed, close examination reveals the exquisite attention of the artist, evident in the red-and-gold pattern of Saint Agnes' dress, the wire-thin gold tie securing the Virgin Annunciate's robe, and the minute grasses and distinct species of flowers that dot the ground beneath the Holy family.

This reliquary is valuable not only as a superb example by Franciabigio, but also for its intrinsic value as a religious object. Small chambers on the surface of the panels enclose what were once considered priceless relics, including a small piece of the True Cross, the stones of Golgotha, and a piece of the tunic of Saint John, among others. It appears, and is supported by the evidence of the date on the Annunciation panel, that this reliquary was created for the Cardinal (later archbishop) of Milan, Saint Charles Borromeo (1538-84; canonized in 1610), one of the most widely represented figures in Counter-Reformation art, using objects that already belonged to his aristocratic family collection. These included a number of Florentine pieces inherited from his mother, who was born into the Medici family. From Saint Charles the reliquary found its way to Monsignor Duchesne, who was responsible for adding the leather and bronze mount stamped with his personal coat of arms, as well as a Latin inscription attesting to its probable origins as the property of the bishop saint. Saint Charles may have carried the reliquary with him in religious processions during the famine of 1570 and then during the plague that ravaged Milan in 1576; it was his care for the poor and sick during this time that led to his canonization in 1610. It is unfortunately not possible to identify this reliquary in lists published by G.C. Bascapé cataloguing the property of Saint Charles Borromeo at his death (Hospital Maggiore of Milan, Milan, 1936), and it is possible that he parted with the reliquary during his lifetime.

Francisco di Cristofano Giudicis, known as Franciabigio, was most likely born in Florence and died in the same city. According to Vasari, he was an apprentice in the studio of Mariotto Albertinelli, a painter whose own work was strongly influenced by Fra Bartolommeo. Franciabigio's student years in Florence coincided with a remarkable time when Leonardo, Michelangelo, and Raphael all resided for a period in that city. In 1510, the year in which the present reliquary was created, Raphael's style was particularly dominant, and this source of inspiration was clearly not lost on Franciabigio. The delicate features of the figures, carefully drawn and elegantly posed, recall the graceful figures of Raphael or of his master Perugino. Franciabigio also adopted some of the qualities of Andrea del Sarto, with whom he collaborated in on the decorative programs of the Chiostro dello Scalzo and the cloisters of SS. Annunziata. The artist was given several commissions by the Medici, and was perhaps best known for his portraits of young men (see examples in the Detroit Institute of Arts; The Uffizi, Florence; and the Louvre, Paris).