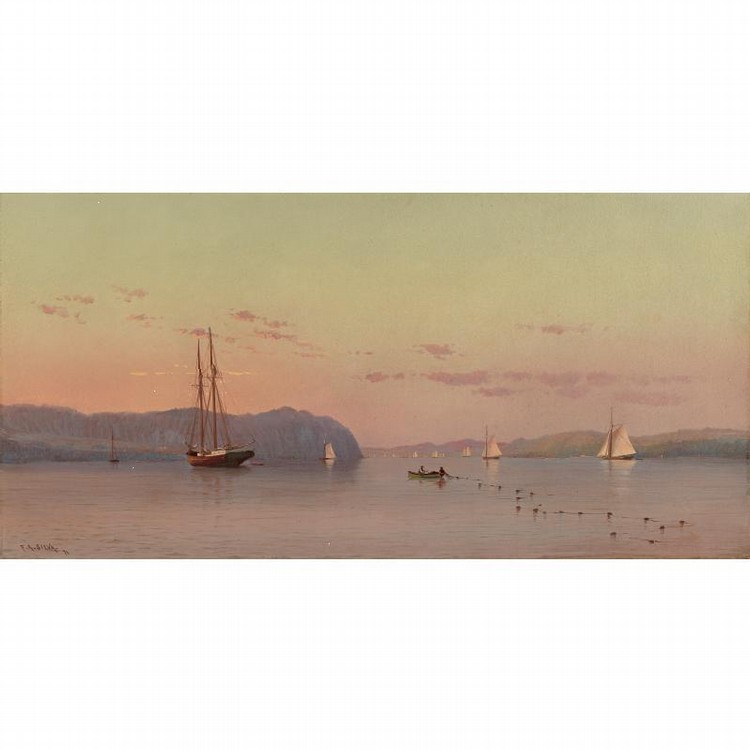 ON THE HUDSON, NYACK

On the Hudson, Nyack represents one of Francis Silva's most successful forays in the luminist idiom. Illustrated in John I. H. Baur's influential article "Francis Silva: Beyond Luminism" (Magazine Antiques, 1980), the present work is a classic expression of the movement deemed "the culminating phase of Hudson River painting" (John Wilmerding, American Light, Washington, D.C., 1980, p. II). Baur first coined the term "luminism" in 1954 to distinguish a group of Hudson River School artists: Francis Silva, Martin Johnson Heade, and Fitz Henry Lane, among others, for their particularly American consciousness of the effects of light and atmosphere. In subsequent reevaluations of the movement, art historians recognized a deliberate manipulation of those effects to elicit a highly personal response from the viewer. Luminism had its literary equivalent in Emersonian transcendentalism and has been credited with fostering "some of the nineteenth century's profoundest thoughts on nature" (Barbara Novak, Nature and Culture, London, 1980, p. 18). On the Hudson, Nyack was painted in 1871, a period of exceptional output, during which the artist traveled constantly up and down the coast, from New Jersey to Massachusetts, in search of subjects. Mark D. Mitchell writes, "by far the most famous of Silva's themes from this early period was not formal, but geographic: the Hudson River...works such as On the Hudson, Nyack incorporate both the diffuse light and palette range (though more muted) of his earlier compositions, but applied to the quintessential nineteenth-century landscape subject" (Francis A. Silva: His Own Light, New York, 2002, pp. 33-34). The scene depicts a broad view of Nyack, New York from the Hudson River (where today the Tappan Zee Bridge crosses the river) as the workday draws to a close. The eastern seaboard was a favorite subject of the luminist painters, who felt the clear light and undeveloped shores were ideal for their aesthetic aims. Mitchell continues, "...perhaps because of the transitional nature of this moment in Silva's career, his Hudson River scenes are among his most charming and effective early works" (Francis A. Silva: His Own Light, New York, 2002, p. 34).

In On the Hudson, Nyack, Silva achieves infinite space through the intimacy of the small scale composition, as opposed to the large panoramas of his Hudson River School counterparts. Art historian Barbara Novak, whose seminal publication American Painting of the Nineteenth Century (1969) broke ground in the discussion of luminism, praised the scale preferred by many luminist painters; citing that by creating a "perfect miniature universe" their depiction of space, "even more than in the large works, gives an impression of limitless amplitude" and "offers to the spectator an irresistible invitation in terms of empathy" (Barbara Novak, Nature and Culture, London, 1980, p. 29). Novak found that the "classic understatement" present in a luminist picture "brought the nineteenth century as close as it could come to silence and void" (Nature and Culture, London, 1980, p. 29). The crystalline surface of On the Hudson, Nyack, its translucent veils of color enhanced by the absence of brushstroke, is a pure manifestation of Novak's criteria for a luminist painting. The horizontal format and saturated brilliance of the sunset and the serene, mirror-like surface of the river create a timeless effect of calm and beauty.