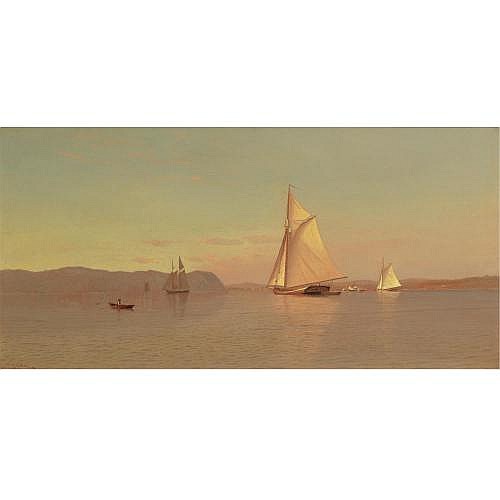 Acquired by the present owner's family, circa 1930s

Sailing on the Hudson, Nyack was painted in 1872, a period of exceptional output, during which the artist traveled constantly up and down the coast, from New Jersey to Massachusetts, in search of subjects. The eastern seaboard was a favorite subject of the luminist painters, who felt the clear light and undeveloped shores were ideal for their aesthetic aims. In Sailing on the Hudson, Nyack, Silva deliberately manipulated the effects of light and atmosphere to elicit a personal response from the viewer. Sailboats glide across a crystalline surface reflecting translucent veils of color in their white sails. Mark D. Mitchell writes, ?By far the most famous of Silva?s themes from this early period was not formal, but geographic: The Hudson River?his Hudson River scenes are his most charming and effective early works?The correspondence between the Hudson River and the quality of these paintings is virtually inexplicable, as they stand apart aesthetically from his other work of the early 1870s. Perhaps the phenomenon is best explained simply as a serendipitous consequence of time and geography of Silva?s concurrent artistic maturation and awareness of his Hudson River School predecessors on their turf? (Francis A. Silva: In His Own Light, New York, 2002, pp. 33-34). John I.H. Baur first coined the term ?luminism? in 1954 to distinguish a group of Hudson River School artists, including Francis Silva, Martin Johnson Heade, and Fitz Henry Lane, among others, for their particularly American consciousness of the effects of light and atmosphere. Barbara Novak, whose seminal publication American Painting of the 19υth Century, broke ground in the discussion of luminism, stated that the movement fostered ?some of the nineteenth century?s most profound thoughts on nature,? offering the spectator ?an irresistible invitation in terms of empathy? which ?brought the nineteenth century as close as it could come to silence and void.? She continued, ?Luminist light tends to be cool, not hot, hard not soft, palpable rather than fluid, planar rather than atmospherically diffuse. Luminist light radiates, gleams, and suffuses on a different frequency than atmospheric light?Air cannot circulate between the particles of matter that comprise luminist light? (Nature and Culture, London, 1980, pp. 18, 29). The present painting depicts a broad view of Nyack, New York from the Hudson River (where today the Tappan Zee Bridge crosses the river).