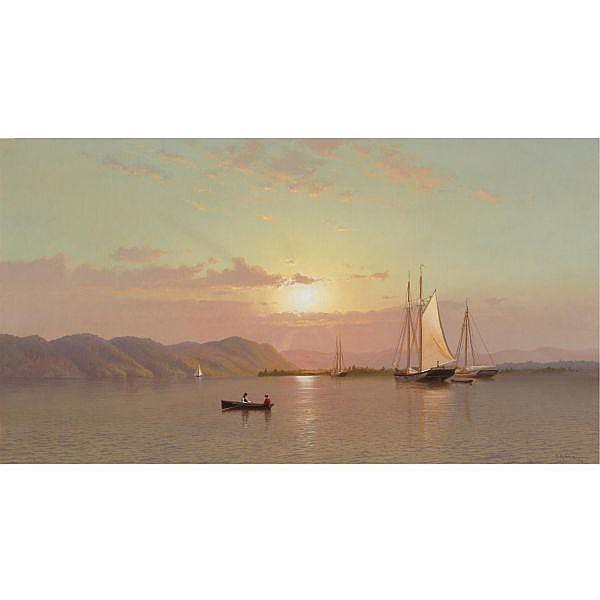 PROPERTY FROM THE COLLECTION OF JO ANN AND JULIAN GANZ, JR.
Before the onset of the Civil War, Francis Silva apprenticed under a local commercial painter in New York City, where he spent his days decorating signs, fire wagons and stage coaches. In 1861, Silva enlisted in a New York militia regiment, rising to the rank of Captain in the 1υst New York Volunteer Infantry. Before the war's end in 1865 Silva's military service brought him to Lynn, a town on the northeastern coast of Massachusetts, where he served as steward of an Army hospital. In 1867, Silva returned to New York and opened his first studio, launching his professional painting career. Evidently inspired by his time in Massachusetts, Silva traveled along the New England and mid-Atlantic coastlines throughout the warm summer months executing sketches that he would later develop into finished works in his studio. Silva exhibited regularly at prestigious New York institutions including the National Academy of Design and the Brooklyn Academy of Art, garnering a reputation as one of the country's important luminist painters. The term "luminism" was not contemporary to the movement itself; it was coined by historian John I. H. Baur in 1954 to describe the "particularly American consciousness of light and atmosphere in mid-nineteenth century landscape painting" (John Wilmerding, American Light: The Luminist Movement, 1850-1875, 1989, p. 12). Among the movement's chief characteristics are an insistence on an expansive, horizontal composition, cool, gleaming light, and a smooth surface notable for its absence of brushstrokes, all of which culminate in a hyper-real image that is neither naturalistic nor impressionistic. The meticulous realism of luminist canvases creates a sense that time has stood still, bringing the viewer into what Barbara Novak describes as "a wordless dialogue with nature" (Nature and Culture: American Landscape and Painting, 1825-1875, 1980, p. 29). Certain proto-luminist tendencies can be found as far back as the radiant landscapes of Washington Allston in the early nineteenth century, and ranging through some late works by the Hudson River School artist Thomas Cole, in which he focused on open compositions and the brilliant effects of light. The gleaming, utterly luminist landscapes of artists such as Sanford Robinson Gifford, Martin Johnson Heade, and Francis Silva would come to define what has been deemed "the central movement in American art through the middle of the nineteenth century" (Portfolio, vol. 1, no. 2, June-July 1979, p. 20). Between 1871 and 1876 Silva often painted the dramatic Hudson River vistas between Haverstraw and the Tappan Zee, with varying points of view and under a variety of light and weather conditions. Sunrise at Tappan Zee depicts the eponymous location where the river swells to its widest breadth, extending approximately three miles across and ten miles long, flanked by the steep bluffs of Palisades Ridge and the Hudson Valley. The area derives its name from the Tappan, a Native American tribe, and the Dutch word zee meaning a sea or wide expanse of water. Here, on calm days, the Hudson assumes a lake-like appearance that permits the rugged contours of the land to be seen from a softening distance. Silva favored the dramatic light that floods the river scene at early morning and sunset. The diffuse light in earlier works such as On the Hudson near Haverstraw (1872, Terra Museum of American Art) eventually gave way to a more crystalline, precise luminosity that can be seen in Sunrise at Tappan Zee. The low, rising sun highlights the white sails of several almost-becalmed vessels and tints the entire scene with a subtle range of pastel shades. With delicate tonal modulations of intense, yet cool hues of pink, yellow, and blue Silva creates a pervasive illumination that unifies the entire surface of the canvas. Sunrise at Tappan Zee also displays another key feature of luminism--the imperceptible brushstroke. The scene is so precisely rendered, particularly the minute ripples on the river's surface and the intricate rigging on the ships, that it is easy to overlook Silva's participation. As Barbara Novak has explained: "The more that the artist's self, embedded in the 'signature' of the stroke, occupies our attention, the less we are dealing with the selfless image of luminism ...We can also say that stroke, carrying action, implies sound. A key correlative of luminism is silence ...luminist silence, in the repose of inaction, represents not a void but a palpable space, in which everything happens while nothing does" (American Light, p. 27-28).