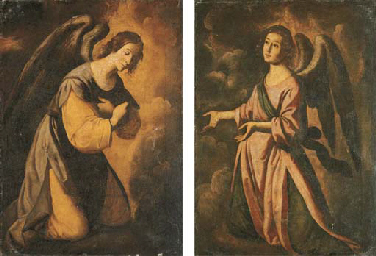 An angel leaning forward in devotion: and An angel looking out with upturned palms oil on canvas 391/2 x 28 1/8 in. (100.3 x 71.3 cm.) a pair (2) PROVENANCE Molina Dazas, Madrid (according to Guinard and Gudiol, see lit.). Private collection, Oviedo (see note). LITERATURE A. Mayer, 'Unbekannte Werke Zurbarans', Zeitschrift fr Bildende Kunst, 1927-8, LXI, pp. 289-92, 'Zwei h”chst charakteristische'. M. Zurita, 'Tres magnificos cuadros de Zurbar n que son desconocidos', ABC, 4 March 1928, illustrated. J. Cascales y Mu¤oz, Francisco de Zurbar n, Madrid, 1931, illustrated. P. Guinard, Zurbar n, Paris, 1960, p. 227, nos. 143 b and c, as either studio works under the direction of Zurbar n or autograph works of circa 1650. M. Gregori and T. Frati, Zurbar n, Milan, 1973, no. 534, under 'Opere attribuite.' J. Gudiol, Zurbar n, London, 1977, p. 101, nos. 284-5. NOTES One of the greatest masters of the Sevillian School, Francisco de Zurbar n is best known for his often startlingly powerful and realistic expression of religious subject matter and his hugely influential but much rarer treatment of still life. After training in the studio of Pedro D¡az de Villanueva in Seville, where he is likely to have come into contact with Juan de Roelas, Francisco de Herrera the Elder - and above all Diego Vel zquez and Alonso Cano, then apprentices in the studio of Francisco Pacheco - Zurbar n left the city but was back in 1626 to work on a series of paintings for the Monastery of San Pablo El Real. From this commission comes his first known dated painting, a Crucifixion of 1627 (Chicago, Art Institute), that exhibits a strikingly Caravaggesque realism in the rendition of the figure; the work brought him immediate fame and led to numerous commissions from religious orders. In 1634, Zurbar n went to Madrid, possibly on the recommendation of Vel zquez, to work on the decoration of the Salon de Reinos in the Buen Retiro Palace. This visit not only exposed him to the work of Rubens and other Spanish artists working for the King, but also led to him being given the title of Painter to the King. In the period 1638-9, Zurbar n was employed on two important commissions: the first for the Carthusian monastery of J‚rez de la Frontera, the second for the royal Hieronymite monastery at Guadelupe. In the Annunciation for the former (now Grenoble, Mus‚e de Peinture et de Sculpture), the kneeling angel with his head leaning gently forward and his arms folded across his chest, is depicted in a pose comparable (but in reverse) to the first angel in the present lot. In the second series, at Guadelupe, Zurbar n depicted another kneeling angel in the lower left of the Saint Jerome flagellated by the Angels, that displays a similar attitude (in reverse) particularly in his hand gesture, to the second of the present angels. It is to this period that Professor Alfonso P‚rez S nchez and Professor Benito Navarrete Prieto date the present pair of Angels. As Spain experienced years of great financial difficulty in the decade 1640-50, there were fewer artistic commissions. From this period, Zurbar n's style gradually changed to incorporate a more diffuse effect of light with a paler palette and less chiaroscuro. During this time he painted an Annunciation, dateable to 1650, now in the Philadelphia Museum of Art, in which the figure of the Archangel Gabriel is also comparable to the present left-hand angel, with similar pose and hand gesture, but in very different attire. The present pair of Angels has been associated with a Saint Peter liberated by the Angel, (present location unknown) whose vertical dimensions are apparently similar and that is, like the present pair, also listed as having been in the 'Masarneu' (Gudiol, loc. cit. ) or 'Massaveu' (Gregori/Frati, loc.cit. ) collection, Oviedo. Some commentators have considered the Angels to be a part of a triptych with the Saint Peter, although that opinion has not received universal agreement. We are grateful to Dr William B. Jordan for confirming the attribution having seen the pictures in the original and to Professor Alfonso E. P‚rez S nchez, and Professor Benito Navarrete Prieto for confirming the attribution on the basis of photographs. Madame Odile Delenda, to whom we are also very grateful, having seen the pictures in the original, believes them to have been painted in the studio under the direction of Zurbar n in circa 1640, whilst Professor Enrique Valdivieso on the basis of photographs, believes that there is 'bastante intervenci¢n de taller' (private written communication, 10 July 2002).