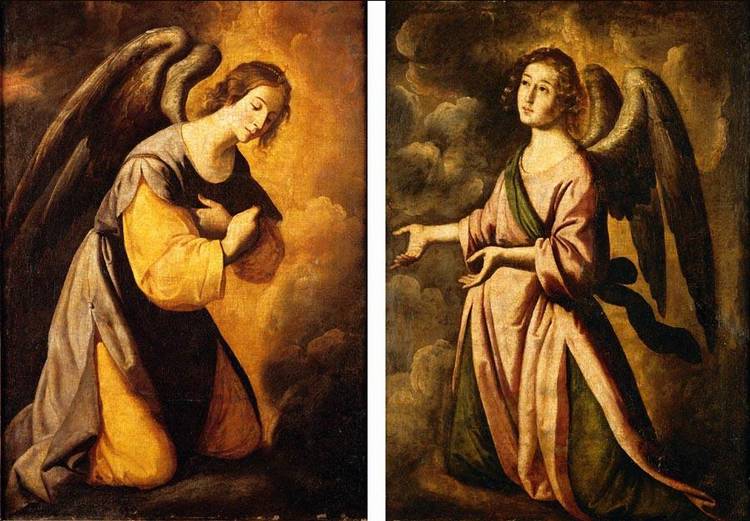 a pair, both oil on canvas, in Spanish carved and parcel gilt wood frames

PROPERTY FROM A SPANISH PRIVATE COLLECTION

Juan Molina Dazas, Madrid;
From whom acquired by the grandparents of the present owners in April 1934.

Francisco de Zurbarán was one of the leading artists working in Seville during the first half of the 17th century. His highly personal style is characterised by a distinctive caravaggesque lighting and a simplicity and monumentality of form, which combined create images of great beauty and religious fervour which earned him a reputation during his own lifetime as one of the greatest religious painters.

The present works are generally believed to have been painted by Francisco de Zurbarán with the assistance of his workshop. The paintings clearly bear the hallmarks of the artist's style, revealed through the simple, geometric forms of the two angels illuminated before a dark backdrop which is partially lit by a dramatic, supernatural light. The elegance of the poses, the purity of the facial types and the soft colouring of the palette make these scenes of great beauty and refinement.

Professor Alfonso Pérez Sánchez believes the present works date to around 1638-39, a highly productive moment within the artist's career, when he was working on two major commissions: the first, in 1638-39, was to provide a number of works for the Carthusian monastery at Jerez de la Frontera (for more information, see Zurbarán, exhibition catalogue, The Metropolitan Museum of Art, New York, 22 September - 13 December 1987, Galeries Nationales du Grand Palais, Paris, 14 January - 11 April 1988, pp. 172 -201); and the second, of a similar date, was for the Hieronymite monastery at Guadalupe, a province of Cáceres (for more information, see op. cit., pp. 212 - 217). The present paintings reveal a number of stylistic and compositional similarities with works by the artist which formed part of these commissions. For example, the pose of the angel leaning forward with crossed arms can be compared closely to that (although seen from the other side) in the artist's rendition of The Annuncation, originally painted as part of the high altar for the Monasterio de Nuestra Señora de la Defensión, Jerez, now in the Musée de Peinture et de Sculpture, Grenoble (see op. cit., pp. 181 - 184, reproduced). This angel in turn, appears to have probably been inspired by an engraving of The Annunciation by Cornelis Cort after a design by Federico Zuccaro, in which the angel in the upper left corner leans forward in a similar pose to that in the present work (see O. Delenda, Su la Terre comme au Ciel, Zurbarán, 1996, reproduced p. 126, figure 173). The use of engravings as a source for designs was however commonplace in the work of Zurbarán (as within that of many artists in Spain), as demonstrated, for example, in his painting of The Burial of Saint Catherine, now in the Alte Pinakothek, Munich, which also borrows from an engraving by Cornelis Cort. The pose of the angel facing left with arms outheld in the present works can also be compared closely to a work by Zurbarán, representing The Flagellation of Saint Jerome and painted for the chapel of the sacristy at the Monastery at Guadalupe, the second of his two important commissions of around 1638-39 (see Zurbarán IV Centenario, exhibition catalogue, Museo de Bellas Artes, Seville, 8 October - 9 December 1998, pp. 180-81, cat. no. 57, reproduced). Although the angel is depicted from the other side, there exist close similarities in the pose and depiction of the angel.

Throughout their publication history, these two works have been associated with a painting (of current whereabouts unknown) of Saint Peter with an Angel, which according to Gudiol (see Literature) represented 'St. Peter Set Free by Angels', presumably The Liberation of Saint Peter. According to Guinard (see Literature) the figure of Saint Peter was shown in profile, kneeling and facing to the right, depicted in the act of trying to get up, his arm stretched out to an angel facing him. According to the author the present works were designed to flank the central image of Saint Peter, creating the overall effect of a triptych, although without the re-appearance of the central image it is not possible to be certain that the present works were indeed conceived as such.

In a recent communication Professor Alfonso Pérez Sánchez, to whom we are grateful, has affirmed that these two paintings were painted by Zurbarán with some studio assitance. Madame Odile Delenda believes the paintings to have been painted in the studio under the direction of Zurbarán in circa 1640. Both opinions have been given following first hand inspection of the paintings in the original.