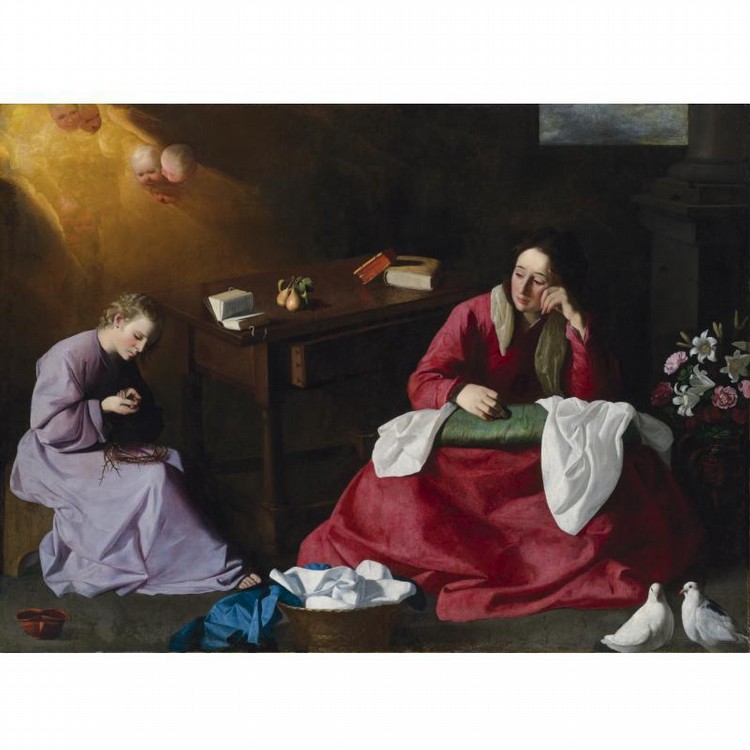 PROPERTY OF A FAMILY

CHRIST AND THE VIRGIN IN THE HOUSE OF NAZARETH

With the Christ and the Virgin in the House of Nazareth, Francisco de Zurbarán created one of the most poignantly touching images of the Spanish contrareforma. In a darkened, stark interior, the Virgin, seated on a low bench, looks up from her sewing towards her now half-grown Son who is seated on a stool beside her. The young Christ, apparently amusing himself with the odd pastime of weaving a wreath of brambles, has pricked his finger on one of the thorns. The supernatural burst of light coming in from the top of the composition leaves no doubt as to the significance of the event and the Virgin raises her hand to her face to brush away tears, her melancholic expression betraying her foreknowledge of her Son's fate.

The source for this startling image is not biblical, but possibly apocryphal or at least somewhat folkloric. Scenes of "Holy Childhoods"— episodes from the early lives of the Virgin, Christ and of the saints— had become popular in Spain in the late 16υth and 17υth Centuries and allowed artists to both flesh out hagiographies left annoyingly vague by the scriptures and to present to their audience the humanity of biblical figures by painting them in what amounted to genre scenes of everyday life. Certainly Zurbarán has filled his composition with a variety of objects that all of his fellow Sevillians would have recognized and owned: simple furnishings, an earthenware cup, books, a vase of flowers. Of course all of these everyday objects were charged with double meaning that the viewer would have recognized: symbols of the Eucharist (the cup); the scriptures (books); original sin (the fruit); the Holy Ghost (the doves), the purity of the Virgin (the lilies); and the rosary (the roses). However, a more fundamental basis for the image has remained somewhat elusive. Francisco López Estrada has suggested that the image has sources in contemporary literature, such as the poetry of Eugenio Salazar de Alarcón and José Valdiviseo, while others have suggested scriptural sources, such as the prophecy of Zechariah "And one shall say unto him, What are these wounds in thine hands? Then he shall answer, Those with which I was wounded in the house of my friends (13.6).υ"υ1

Whatever the exact antecedents for the theme, Christ and the Virgin in the House of Nazareth was very much Zurbarán's own pictorial invention. He was the first Spanish artist to have treated the subject and the only Andalusian artist to do so. Surprisingly, despite the numerous school versions and redactions of the composition (attesting to the subject's unquestioned popularity), the two prime autograph canvases of the House of Nazareth were only re-discovered in the last fifty years. The first of these to reappear was the version now in the Cleveland Museum of Art, acquired in 1960.υ2 The present canvas, although included in the sale of the collection of George A. Hearn in the early years of the 20υth Century, was unavailable for general study and had been considered a school work of exceptional merit until it was cleaned in the mid 1980s before its inclusion in the monographic exhibition on the artist (see Exhibited). It was then that its high quality and the existence of numerous pentimenti became evident, thus confirming its autograph status. As Baticle noted "[e]l modelado de la cabeza de Niño está perfectamente consequido; los dorados cabellos parecen naturales; el dolor de la Virgen está manifestado ínteriormente; la naturaleza meurta de la mesa ha conservado su materia rica y saturada con reflejos maravillosamente indicados [the modeling of the head of the Christ Child is perfectly achieved; the golden hair appears natural, the anguish of the Virgin is inwardly manifest, the still life on the table has retained its rich and saturated pigment with marvelously suggested reflections]." υ3

The exact relationship between the Cleveland and this painting has been difficult to determine. Some scholars have considered the more familiar Cleveland picture as the first version, yet others have asserted the opposite, most noticeably Baticle, who felt it was possibly the original.υ4 There are a number of differences between the two. The most evident of these is the difference in the color of the young Christ's robe: a bluish-mauve in the present canvas and a grayish-blue in the Cleveland. Baticle has noted that the purple of the present version was a color reserved for liturgical purposes to Advent and to Lent, when it was associated with penitence. There are other differences: the pages of the open book on the table are articulated differently; the fruit is disposed on the tabletop differently, there are changes in drapery, and a different cup is set on the floor by Christ's stool.υ5 The Cleveland picture measures slightly larger than the present example, and it seems likely that the painting was slightly trimmed along the bottom and left edge. Of the various school versions and copies, many are clearly derived from this one and not the Cleveland by the inclusion of these variations. Among these are two notable examples, one formerly in the Paredes Norgueras Collection, Valencia (shown in 1953 in the Exposicion Zurbarán in Granada) and another in the collection of Robert Espinal, Barcelona. Thus it is hard to separate the two pictures from each other or award either one of them primacy. Both together must be considered one of the monuments of Zurbarán's oeuvre: "Está obra, como la de Cleveland, tiene un alto nivel espíritual y técnico en el que Zurbarán se iguala a los más grandes, con un estilo tan personal que no consigue ser imitado por sus ayudantes [This work, like the one in Cleveland, attains a high spiritual and technical level in which Zurbaran attains the level of the greatest masters, with a style so personal not to be imitated by his assistants]."υ6

Note on the Provenance:

The provenance of this painting can be traced back further than any of the other autograph versions of the picture, but still only to the turn of the 20th Century. It was owned by George Arnold Hearn (1835-1913), a major benefactor and trustee of the Metropolitan Museum of Art, New York. Hearn was an early and important collector of the American school, and he donated more than 130 paintings to the museum along with funds for acquisition, particularly for American paintings. He was regarded as one of the leading connoisseurs of his day, "one of the most conspicuous and enthusiastic patrons of art in the country" (see C.R. Barrett, "George A. Hearn," Antiques Magazine, January 2000). The Christ and the Virgin in the House of Nazareth appeared his posthumous sale (see Provenance) as a work of the Cordoba artist Antonio del Castillo, then considered to be a pupil of Zurbarán.

The painting was purchased at that time by another significant collector, Arthur W. Wellington (1868-1938) (see fig. 1). Wellington's life is a quintessential tale of the America of the late 19υth Century. From a well-heeled New England family, he was orphaned at an early age and started work as soon as he left school. He found a job as a messenger boy in the US Leather Company in Boston; he retired years later as the firm's president.

Wellington's taste was quite direct, one imagines like his character. His focus was on early American furniture, and he amassed a considerable and fine collection of 18υth Century pieces, rivaling and befriending other giant collectors in the area, such as Wallace Nutting and Henry Francis Du Pont. The purchase of Zurbarán's Christ and the Virgin in the House of Nazareth, is when reflected upon, not surprising; it is touching and beautiful, but with an elegant severity that would have complimented his furniture and other Americana. It is no small tribute to the picture, in fact, that it was owned by two of the greatest American connoisseurs of the last century.

1 Lopez Estrada 1966; H.S. Francis, "Francisco de Zurbarán: The Holy House of Nazareth," The Bulletin of the Cleveland Musuem of Art, 1961.

2 The Cleveland picture was recorded in the collection of Count Walterstorff, Paris, in his sale May 26-27, 1821, lot 65, where it was praised by the artist Laneuville. It then reappeared in the mid-twentieth century with the dealer Francois Heim, who sold it to the museum.

4 "La reciente restauracion de este cuadro prueba que se trata de una obra original de Zurbarán y que se puede ser, incluso, la primera version [Trans: The recent restoration of this painting proves that it is an original work of Zurbarán and that it might even be the first version]."

5 Odile Delenda (see Zurbarán, exhibition catalogue 1988) has suggested that the pinch-rimmed cup in the lower right of the present picture is a symbol of Saints Justina and Ruffina, the patron saints of Seville. This has lead her to hypothesize that the present canvas may be connected to the Convento de la Trinidad Calzada where the saints were particularly venerated and when the Child Christ was also specially revered.