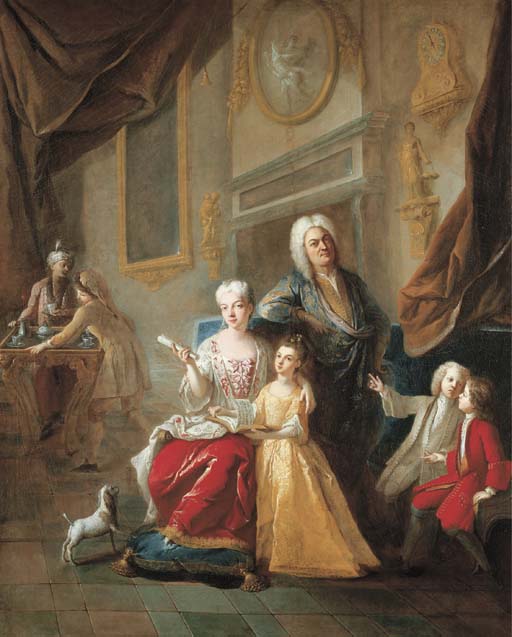 PROPERTY FROM THE ESTATE OF MICHAEL L. ROSENBERG

The present work was given to Robert Levrac-Tournières when it was sold in 1922, however, Cailleux subsequently published it (loc. cit.) and convincingly re-attributed it to de Troy on the basis of comparison with a number of signed works by the artist.

Several points of fashion suggests that the painting dates from relatively late in de Troy's career: the hairstyles of all the sitters except the father and the style of the mother's dress with its open front and series of bows are characteristic of the mid-1720s. Furthermore, the designs of the silver mounted porcelaine de Chine coffee cups and sugar basin have been dated by Jacques Helft to 1722-27 (op. cit., p. vi). Cailleux also draws attention to the pair of sculptures on either side of the chimney piece, probably
allegories of Charity and Justice, and the bas-relief above it, which might allude to The Fall of the Rebel Angels, all of which suggest that this group portrait might depict a magistrate and his family.

François de Troy was a successful history and portrait painter whose long career, alongside that of Hyacinthe Rigaud and Nicolas de Largillière, spanned across the late Baroque and early Rococo. However, unlike the grand compositions of his friendly rivals, de Troy's portraits in particular were executed with a great degree of naturalism and intimacy, earning him a reputation as portraitist of women. His gift at capturing the upper-class preoccupation with manners and social standing made de Troy equally popular with patrons from both the court and the bourgeoisie, including Mme de Montespan, mistress of Louis XIV, and their son, Louis-Auguste de Bourbon, Duc du Maine. Among his many pupils Alexis-Simon Belle, Hubert Drouais and the painter's son, Jean-François de Troy, who seamlessly conflated portraiture and genre painting in his popular tableaux de mode.

François was born in Toulouse but trained under Claude Lefebvre in Paris, where he was received by the Royal Academy as a history painter in 1674. After Lefebvre's death the following year, de Troy devoted himself completely to portraiture with the hopes of acquiring his master's clientele. Around 1700 de Troy's repertoire expanded to include group and family portraits inspired by Dutch and Flemish models. The present portrait of a magistrate and his family is a fine example of the artist's late group portraits executed during the reign of Louis XV. Two groups of richly dressed figures, compositionally linked through a single gesture of the magistrate's wife seated along the central axis, reveal the pastimes of privileged French society.

On occasion, Christie's has a direct financial interest in lots consigned for sale.