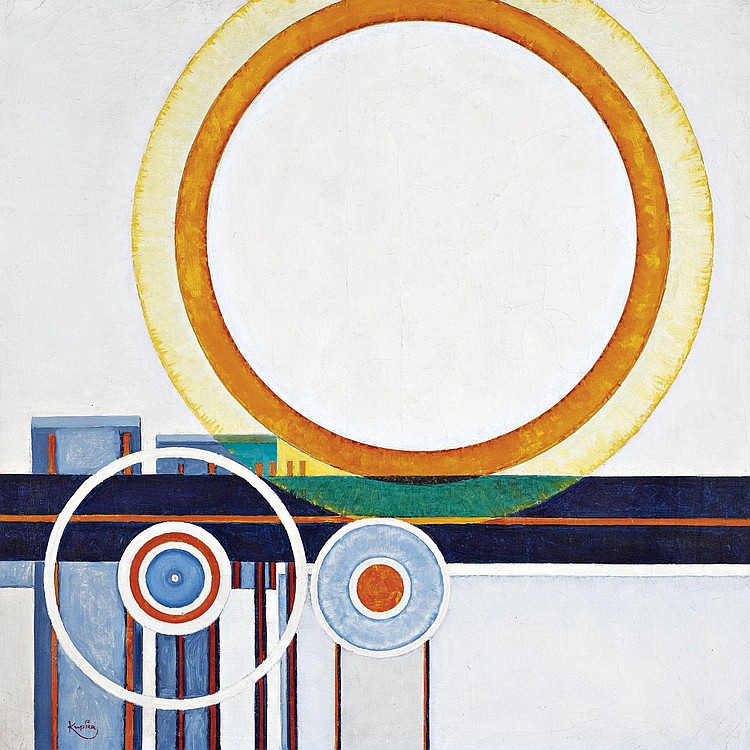 Painted in 1946, Disque blanc marks the culmination of the development of Kupka's artistic vision as one of Europe's leading avant-garde abstract painters during the interwar period. In 1931 he became a founder member of the Abstraction-Création group in Paris. His paintings developed away from the riot of colour that had characterised his earlier work (see lot 39, Movement) and were reduced to reds, blues, and yellows against a white background. These paintings show the influence of the Futurists and of the Purists and can be seen as a counterpart to contemporary avant-garde architecture, expressing a state of harmony and balance.

Like Wassily Kandinsky, Kupka was an intellectual artist who strove for a conceptual basis for his art. He studied colour, optics, cosmology, physiology, biology, and anthropology, subjecting his studies to his aesthetic concerns. Disque blanc is an exploration of the separation and interaction of colour, of the relationship between the earth and the stars, the dominant orange disc evoking the sun rising or setting over a futuristic city; of the relationship between forms and shapes. For Kupka painting was not a mere imitation of nature but a subjective transfiguration of nature into an ensemble of graphic elements and gradations of light and colour to create another reality.

The present painting was included in the 1946 retrospective exhibition of Kupka's work, at which some forty paintings were bought for what was intended to be a Kupka museum. In the same year Kupka started exhibiting at the Salon des Réalités nouvelles, at which he was given a gallery to himself. It was not until 1958, however, with the posthumous exhibition at the Musée National d'Art Moderne that his life's work was substantially re-evaluated and his importance as a painter fully recognised.