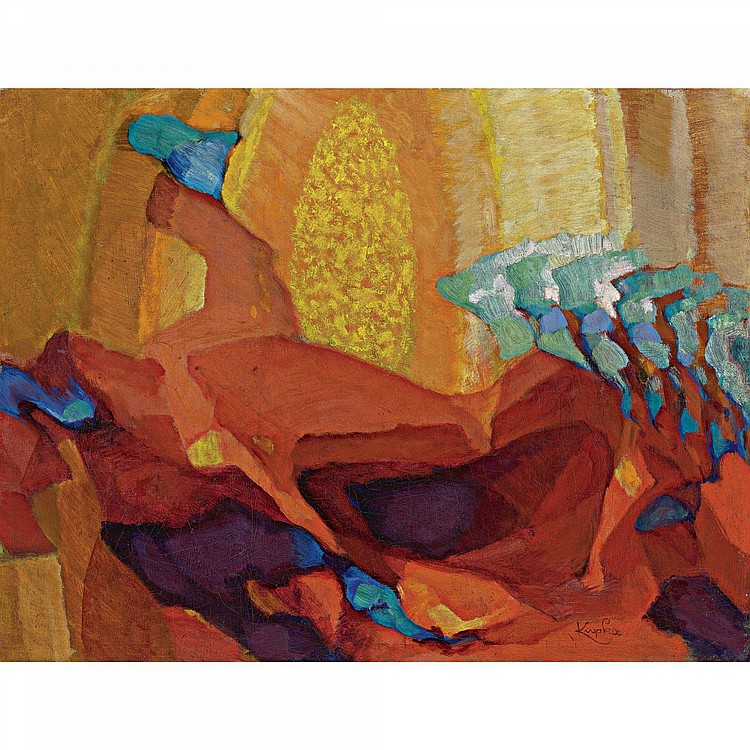 Painted between 1913 and 1919, the present work is one of the finest examples of Kupka's paintings from this key period in his artistic career. Although the stridently red central motif can perhaps be read as evoking a recumbent human form, Movement is essentially what its title implies: a study of objects in dynamic shift. Jiří Hlušička writes simply that 'Movement stands out like a precious jewel, a masterpiece executed with [an] exceptional spirit of lyric poetry' (Hlušička, p. 26).

Kupka settled in Paris in 1895 after completing his studies at the Akademie der Bildenden Künste in Vienna, earning his living in the French capital in his early years there as an illustrator for periodicals and journals, with a strong vein of social commentary running through his work. The stimulating environment of the French metropolis; the ferment of modern art in the city; and the artists and exhibitions travelling to it were all to inspire Kupka's painting greatly. From 1909 onwards, he increasingly turned away from capturing external reality towards espousing a radical simplification of pictorial composition that resonated deeply with internal realities of emotion, of instinct, and of the spiritual and with the cosmic and the cosmological.

Kupka's paintings from the first two decades of the twentieth century most strongly demonstrate his interest in cosmology and in the interplay between the pictorial arts and music. Although Kupka did not go perhaps as far as Wassily Kandinsky went in his exploration of the interplay between the visual and the aural (Kandinsky was, after all, a synaesthete for whom precise sounds such as a single note played on a violin conjured a vividly precise colour), the focus in Movement on a very dense, rich colour palette suggests that there is another sense-dimension at play and the ellipses of orange and yellow in the background plausibly echo galactic phenomena such as the rings of Saturn.

Although one can perhaps look as far back as masterpieces of nineteenth-century art to detect some of the formal inspirations for Movement, such as Gustave Courbet's La Femme au perroquet of 1866, in its interest in capturing movement, the composition suggests strong links with contemporary developments in European Modernism. The dynamic, shifting blue-green element on the right of the composition shows a close alliance of interest with the project of the Italian Futurists, who were reaching the heights of their powers during the period in which Movement was painted. Umberto Boccioni's Study for 'The City Rises' (fig. 1) shows a remarkably similar blue-green vertebra-like element at the upper centre of the composition and it is tempting to think that Kupka would have known of this important Futurist painting.

In the present work, Kupka also betrays a close visual affinity in the palette that he uses and the almost organic forms that he creates with the Blaue Reiter group of German Expressionists. Amongst that group, the closest kinship is with the painting of Franz Marc (fig. 2).

The present work draws either consciously or through unconscious affinities, on a range of painterly sources from the nineteenth century through to those of Kupka's contemporaries in Italy and in Germany. At the same time, Movement transcends art history and contemporary practice to find its own unique voice, one that is powerful and clear and unmistakably Kupka's own.