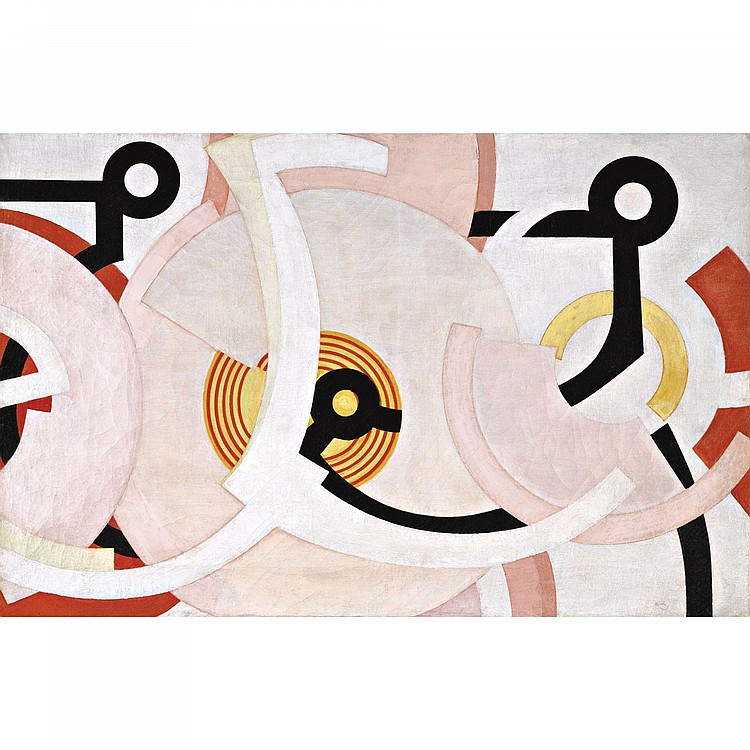 Painted in 1935, Divertimento II is an expression of Kupka's love of music which he had explored in his art as early as 1909 in works such as Piano Keys: The Lake (Prague, National Gallery), and explores the inner analogy between art and the music. The title of the work, literally 'amusement', refers to a type of light-hearted musical entertainment popularised in the eighteenth century and played at social functions and events, and indeed the painting is an almost mesmeric rhythm of shapes, colours, and what could be read as dancing figures.

But despite its ornamental qualities, Divertimento II also contains more ominous philosophical elements, turning the very meaning of 'amusement' on its head. On closer reflection, the dancers become automaton workers toiling in a futuristic factory, their limbs extensions of the cogs and levers they operate. The rhythm is that of repetitive work of the machine age. Human beings are no more than drones dancing to the hum of rotating discs and axles that are the war machine.

On a deeper level, Divertimento II reflects the scientific basis for so much of Kupka's work. The composition has the qualities of a microscope slide seen at high magnification and showing the very building blocks of the material world, like some of the works of Kupka's contemporary, Wassily Kandinsky (fig. 1). In this light, the discs can be read as cells, interconnected by the threads of matter itself, underlining the fundamentally conceptual nature of Kupka's aesthetic.