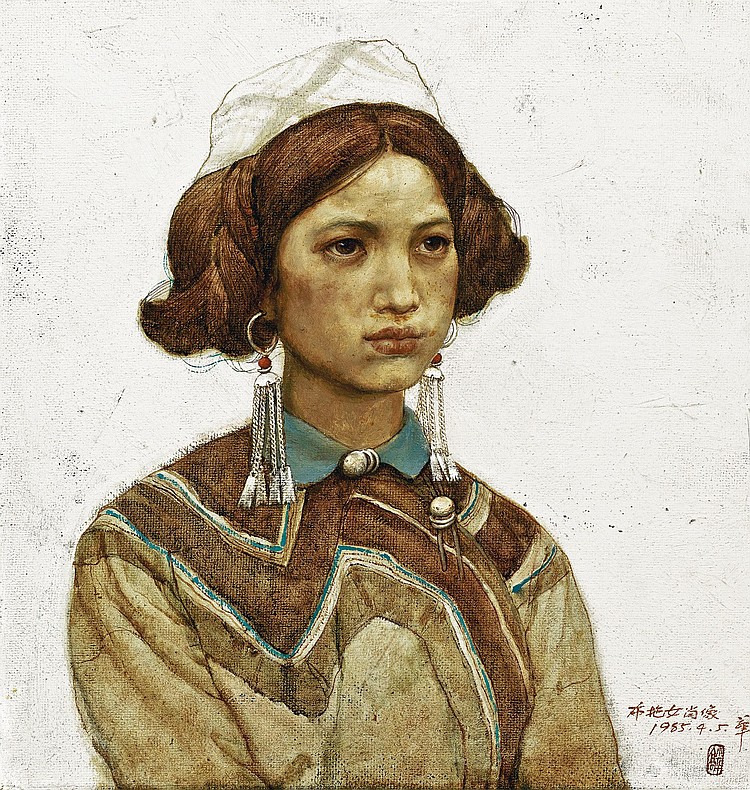 Born in Nanjing in 1955, Gao Xiaohua moved to the countryside at the young age of 14 with his parents, who were then labeled as 'capitalist sympathizers' during the Cultural Revolution. After having joined the army briefly, he subsequently began painting, and later became a photographer and arts editor for the Wuhan Military Area newspaper at the age of 17. A keen observer of daily life, he often traveled by trains around various provinces during his trips on duty, and began to sketch and photograph elements that record the realities of society in remote areas of China for his paintings. Trained at the Sichuan Fine Arts Institute, Gao produced his critical breakthrough painting Why in 1978, which placed him among the pioneers in the visual form of "Scar Art", a movement that re-examined the psychological effect and human cost behind the Cultural Revolution.
Along with a group of young, nationalistic realist painters, Gao later became a chief exponent of the Sichuan School of Painting. He focused on the rustic, almost nativist depiction of peasant life in remote areas that are untainted by social ideologies that constrained him. Seen through the prism of romantic optimism, his works coined under New Realism, are creative explorations and philosophical musings that emphasize on humanistic concerns and even the existential state of ordinary village life. From 1983 onwards, he began to paint the Yi ethnic group in Sichuan's Liangshan area. Girl of Butuo (Yi Girl) (Lot 1377), an exemplary work from this period, depicts the simple and innocent nature of the people. Heavy, flat brushstrokes of earth tones are matched with fine, meticulous lines that render the details like that in traditional ink painting style of gongbi. Yet the concise, solitary and sentimental image may reflect an influence of the American painter Andrew Wyeth, whose works were first introduced in China at the end of the 1970s. Even in its simplest form, technology in rural societies poses a philosophical dilemma for Gao. Veiled in a commonplace imagery, Sewing (Lot 1443) perhaps present the young boy as witnessing the mobilization of peasants and the empowerment of females on one hand, and the loss of tradition on another, as represented by the mechanical alterations made to the handcrafted clothing.
Gao continued to look towards China after he emigrated to the United States in 1985, achieving greatly diversified and evolved styles over time. In Against Strong Wind and Snow (Lot 1444) and Girls under Umbrella (Lot 1378), the paint surface is smoothed out to create softer focus and shadows of a chiaroscuro-like effect. The spirituality, love for nature, and value of uncomplicated human relations of the people, are seen under a radiant glow of optimistic, warm light that illuminates the idealized, romantic and sentimental portrayal of an idyllic landscape filled with rustic charm.
In 2002, Gao returned to China with an invitation to act as the director of the oil painting department at the Chongqing University. He leads a new generation of young artists to develop their unique creative approaches and visual language based on individualistic expression, and a new awareness of the changing social atmosphere in contemporary China