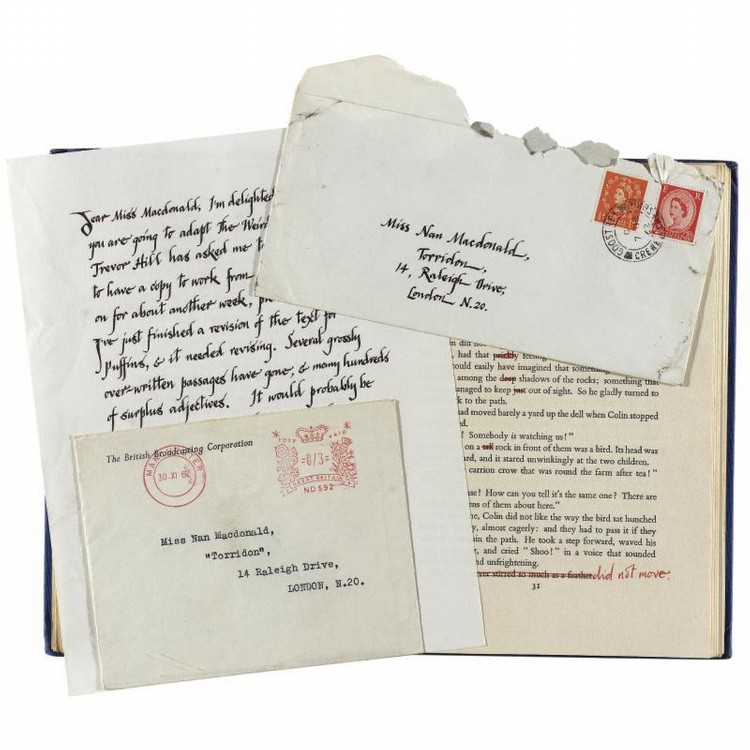 THE WEIRDSTONE OF BRISINGAMEN. COLLINS, 1960

Nan Macdonald was asked to adapt Garner's novel for radio late in 1962. The first letter to Macdonald, from the secretary of the organiser of children's programmes in the North, notes that the Penguin edition of the book "is a cut version" and the secretary has therefore written to the original publishers for "the full version" (Pat Paull to Nan Macdonald, typed letter signed, 1 page, 4to, BBC Manchester, 29 November 1962). The author then wrote stating he was "delighted to hear that you are going to adapt the Weirdstone for radio". He notes that he has "just finished a revision of the text for Puffins, and it needed revising. Several grossly over-written passages have gone, and many hundreds of surplus adjectives" and asks for Macdonald to use the new version noting "it will take about a week for me to get hold of a copy, and to prune it, and then send it on to you" (Alan Garner to Nan Macdonald, autograph letter signed, 1 page, 4to, Blackden, Cheshire, 7 December 1962). The volume is extensively annotated by the author in red ballpoint and was presumably sent two months later. The final letter notes "One Weirdstone. I hope you find it worthwhile, and I'm very much looking forward to hearing the result" (Alan Garner to Nan Macdonald, autograph letter signed, 1 page, 4to, Blackden, Cheshire, 7 February 1963).