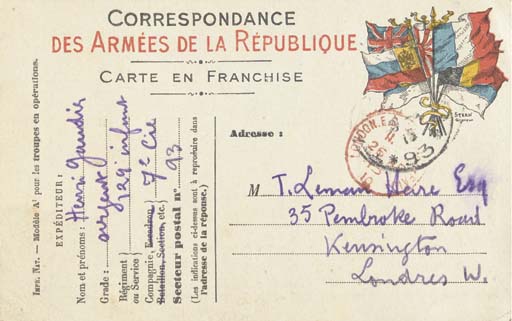 GAUDIER-BRZESKA, Henri. Autograph postcard signed ('H. Gaudier') to T. Leman Hare, n.p., 14 April 1915, in English, on a correspondence card of the Armées de la République, one page, 8vo; three autograph letters signed by Sophie Gaudier-Brzeska to Leman Hare (the third to Mrs Hare), 369 Fulham Palace Road, London, 20 June - 23 July 1916, in English, together 7 pages, 8vo and 4to, with one envelope; and a retained copy of a letter to Sophie by Hare, 3 July 1916; a glass negative of a self-portrait drawing by Henri Gaudier-Brzeska which had been inscribed 'à Mme Hare Noël 1912', and a print of the same, with five other photographs of works by the artist.

GAUDIER-BRZESKA CONTEMPLATES THE PROSPECT OF DEATH. He congratulates his correspondent on his 'drilling in the guard', and laments that he has met no English soldiers at the Front. 'All this is of course very sad but it is the glorious end which none of us fears'; he adds that he will write to Captain Mafall -- 'will he come over too & fight?'. Gaudier-Brzeska was killed on 5 June 1915, during an infantry charge at Neuville-Saint-Vaast.

The correspondence between Sophie Gaudier-Brzeska (Henri's wife, to whom he left his work in his will) and the Hares concerns a dispute over their ownership of a painted plaster cast of a Madonna, which the Hares consider themselves to have bought, whereas Sophie maintains they simply paid an advance for the casting. Both parties claim straitened circumstance brought on by the war, while Sophie remarks that 'I cannot sell anything, unless I should give it for a vile price, which neither Henry's talent, nor my principles allow me of doing', remarking that she never liked the statue in question anyway. (5)