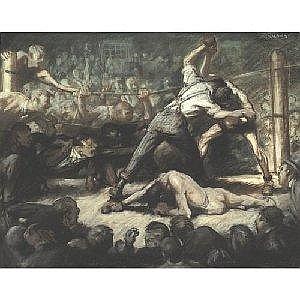 Request more information
Contact: Sotheby's
Auction: American Paintings, Drawings and Sculpture including Property from the Collection of Rita and Daniel Fraad
Auction Date/Time: December 1, 2004
Lot 13: GEORGE BELLOWS 1882-1925 THE KNOCK OUT Measurements: 21.75in. by 28in. Alternate Measurements: (55.2 by 71.1 cm) signed Bellows, u.r.; also inscribed Geo Bellows/1947 Broadway/N.Y./"A Knock Out" on the reverse pastel and ink on paper Executed in
Cancel