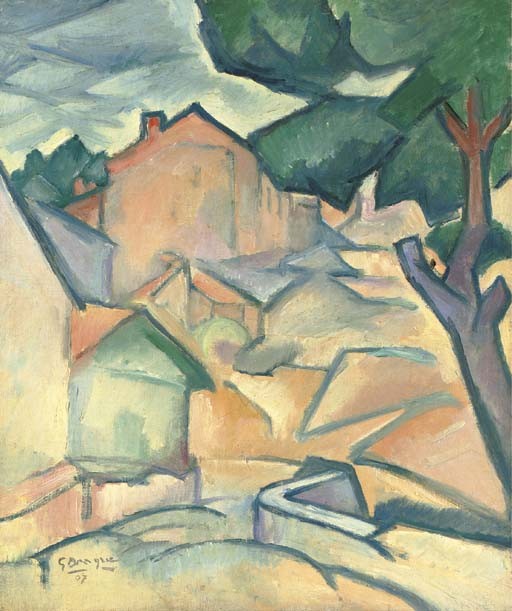 Marius de Zayas, New York, by whom acquired directly from the artist.
Acquired from the above by the present owner in the early 1960s.

Painted in 1907, Maisons à L'Estaque is a rare proto-Cubist painting that reveals Braque's transition from Fauvism towards Cubism under the influence of an absent mentor, Cézanne. The painting heralds the advent of Cubism and therefore of modern art itself. The identification of this work as one of Braque's earliest important proto-Cubist paintings is reflected by the fact that it is only the second picture in Romilly's authoritative catalogue raisonné of the period. Extensive correspondence spanning more than a decade exists between the present owner and the celebrated curator William Rubin showing that the Museum of Modern Art enthusiastically pursued the purchase of this picture, and also that Rubin desperately wanted to include the painting in his epic landmark exhibition, Picasso and Braque: Pioneering Cubism, held in MoMA in 1989.

Maisons à L'Estaque was painted late in 1907. That year, Braque made several visits to the scenic town, made famous in the paintings of so many Impressionist masters, and continued using its landscape as a motif on his return to his Paris studio. Maisons à L'Estaque may therefore have been painted in both or either L'Estaque and Paris. Braque visited L'Estaque many times during the early stages of his mature period, and the transformations that occurred in his art are easily traced in the shifting style and growing confidence with which he rendered the town and its surroundings. His visits to a place associated with so many of the great artists, especially Cézanne, show that Braque was willingly taking on the mantle of the avant-garde, for over recent decades, the scenery of L'Estaque had been the subject-matter of some of the most groundbreaking landscape paintings ever.

In his earlier visits of 1906, Braque's association with the Fauve painters was clear in an increasingly strong and talented output, exemplified by paintings such as L'Estaque of that year, in the Centre Georges Pompidou in Paris. Nonetheless, some critics have stated that Braque's Fauvism lacked the intense focus that would mark his later works. However, Braque had been one of the most successful and impressive of the Fauves, and during this time developed a profound understanding of colour, filling his works with bright, burning oils.

Braque himself clearly tired of Fauvism and its link to the artist's emotions within only a couple of years, for he sought some level of pictorial factuality. Certainly, by the Spring of 1907 Braque was experimenting with new ideas of art with his friend Othon Friesz, moving away from the direct passion and gusto that marked the Fauves. In their place, a more tempered palette and a greater interest in structure came to flavour his works, much to the disapproval of his former fellow Fauve, Derain, who dismissively wrote to Vlaminck that 'Their idea is young and to them seems new; they'll get over it. There are other things than that to be done' (Derain, letter to Vlaminck, quoted in W. Rubin, Picasso and Braque: Pioneering Cubism, exh.cat., New York, 1989, p. 344).

The death of Cézanne in 1906 had the opposite impact on Braque: instead of 'getting over' his new idea, the subsequent exhibitions and publications of Cézanne's work cemented his resolve to steer away from Fauvism. Cézanne's pictures, to which Braque was exposed during a trip to Paris in late 1907, revealed that Cézanne too, in moving away from Impressionism and the strong influence of Pissarro in the 1870s, had faced a similar yearning for more structure in his landscape compositions that resulted in his radical, modern reinvention of painting. The difference between Braque's pre- and post-Cézanne pictures was astounding. Braque now found in Cézanne an absentee mentor, whose lessons he took to heart like no other artist of his era.

The most immediate evidence of Cézanne's influence on Braque is found by comparing the former's Gardanne paintings with Maisons à L'Estaque. Braque has adopted the same vertical piling of ever-diminishing volumetric shapes in order to give the sense both of mass and of distance. However, Braque's painting is deliberately less articulated than Cézanne's Gardanne paintings in the Metropolitan Museum or that in the Brooklyn Museum (R. 432 & 431 respectively). By restraining from leaving any overtly painterly traces in the fields, Braque exaggerates the planar aspects of the forms to a far greater extent, prefiguring the fully-fledged Cubism that was now only months away from being developed. In many ways, Braque had therefore moved past Cézanne, adapting the Master of Aix's legacy for a new era. He had reduced the definition of detail in order to create a far bolder painting, its almost geometric zigzags the only articulation in the striking foreground. These lines lead our eyes, dragging us into the distance in a series of ever-diminishing and ever-shorter lines and angles towards the house at the summit, and then to the skies.

Braque retained some lessons from Fauvism which he combined with Cézanne's interest in sensations. His volumetric rendering of the town of L'Estaque is a means by which he attempts to convey not only the town's appearance, but also his own appreciation of the compositional beauty of the scene. Painting is a subjective act, and Braque uses this increasingly formalized visual language in order to capture his own sensations in viewing the scene. Braque gave his own interesting account of the process of painting as mediation between reality and representation, explaining (albeit about painting a woman) that,

'I must therefore create a new sort of beauty, the beauty that appears to me in terms of volume, of line, of mass, of weight, and through that beauty interpret my subjective impression. Nature is a mere pretext for decorative composition, plus sentiment. It suggests emotion, and I translate that emotion into art. I want to express the Absolute' (Braque, quoted in E. Mullins, The Art of Georges Braque, New York, 1968, p. 34).

Where Picasso's understanding of Cézanne, and his gleaning from his work, involved a scattered and inconsistent process of mix-and-match, Braque had actively taken up the mantle of Cézanne. Picasso's interest in developing a new, more volumetric means of representation at that point owed more to African prototypes than it did to Cézanne, although the latter's influence was clear in parts. At the time that Braque was painting Maisons à L'Estaque, Picasso was painting his masterpiece, Les Demoiselles d'Avignon. Like Maisons à L'Estaque, this work prefigured Cubism. Indeed, it spurred it into existence: only weeks after he executed Maisons à L'Estaque, Braque was taken by Guillaume Apollinaire to the Spanish artist's studio, where he saw Les Demoiselles d'Avignon, which was as yet unfinished. He was shocked, yet completely enthralled. What he saw in Picasso's masterpiece in progress he could not ignore, not least because Picasso was approaching similar artistic goals, yet from a completely different angle.

In the following couple of years, under each other's influence and mutual momentum, Braque and Picasso would conceive Cubism. The changes fomenting in Braque's thoughts on art were to be revealed in more paintings of L'Estaque, a touchstone for his artistic development during the period, for instance Viaduc à L'Estaque from early 1908 that is in the Centre Georges Pompidou. This work reveals the continuing transition, yet in it both the distilled Cézannisme of Maisons à L'Estaque and the more jutting angularity of Les Demoiselles d'Avignon meet. Braque has used a more Cézanne-like application of the oils, using feathered brushstrokes and therefore foregoing the absorbing visual simplicity of Maisons à L'Estaque.

This picture was purchased directly from the artist's collection by Marius de Zayas, himself another revolutionary of the art world. A portraitist and caricaturist, de Zayas was recently celebrated in a small exhibition at the Metropolitan Museum of Art, which also holds several of his works. The son of a prominent Mexican man of letters, de Zayas became a director of the Modern Gallery, which opened in New York in 1915. A showcase for avant-garde art, the Modern Gallery caused huge scandals with its controversial exhibitions, resulting in de Zayas' frequent correspondence with characters as important and diverse as Picasso, Picabia, Tristan Tzara, Max Jacob, Diego Rivera, and his close friend Alfred Stieglitz.

This work has been requested for the forthcoming exhibition Georges Braque et le paysage. De l'Estaque à Varengeville 1906-1963 to be held at the Musée Cantini, Marseilles from 1 July to 1 October 2006.

This work has been requested for the forthcoming exhibition Georges Braque et le paysage. De l'Estaque à Varengeville 1906-1963 at the Musée Cantini, Marseille from 1 July to 1 October 2006.