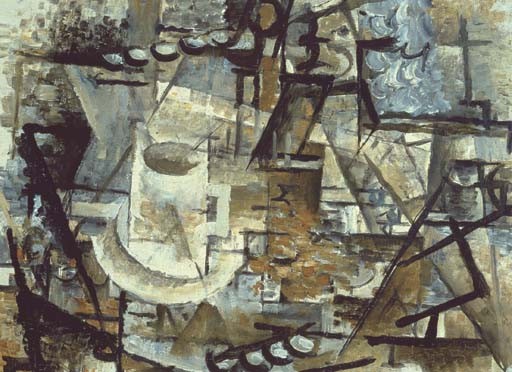 Property belonging to the Museum of Contemporary Art, Chicago, sold to benefit the Museums Acquisition Fund.

"Picasso and Braque had to begin with objects of the simplest sort in still life, with plates, symmetrical vessels, round fruits. It has made us aware of the beauty of form in the simplest objects, where we had carelessly overlooked it before. These objects have become eternally vivid in the reflected splendor of the beauty which the artist had abstracted from them" (Daniel-Henry Kahnweiler, "The Rise of Cubism", quoted in H.B. Chipp, Theories of Modern Art, Berkeley, 1968, p. 248).

The cubist still-lifes and figure paintings executed by Braque and Picasso between 1910 and 1911 and widely regarded as being the most majestic and successful in the history of the movement. In the summer of 1910, Braque put the experiments and uncertainties of the early cubist years behind him and painted works of astonishing clarity and complexity.

Three years earlier, towards the end of 1907, in an event of decisive importance to the history of modern painting, the poet Apollinaire introduced his close friend Picasso to Braque. This affected Braque greatly. By the summer of 1908, reflecting on his third visit to L'Estaque, where he had painted so many of his Fauve works, Braque later remembered: "When I returned a third time to the south, I found that the exaltation which had overwhelmed me on my first visit, and which I put into my pictures, was no longer the same. I saw something else." That "something else" was not so much the color as the structure and line of the landscape. The move to cubism was only a step away.

In November 1908 Kahnweiler arranged a one man exhibition of Braque's work at his gallery in rue Vignon. The contemporary critic Louis Vauxcelles described the radical change of direction in Braque's painting by calling Braque "brave" and "honest" (G. Apollinaire, quoted in H.B. Chipp, Theories of Modern Art, Berkeley, 1968, p. 235). Although the greater part of works in the 1908 exhibition were landscapes, by 1910 the majority of his paintings were still-lifes. This shift indicates not only that Braque was spending more time in the studio but also perhaps that he could more readily achieve his theoretical goals through the object rather than through representation of landscape. In an article of 1910 Braque states "I couldn't portray a woman in all her natural loveliness. I haven't the skill. No one has. I must, therefore create a new sort of beauty, the beauty that appears to me in terms of volume of line, of mass, of weight. I want to expose the absolute, and not merely the factitious woman." (quoted by G. Burgess," The Wild Men of Paris," Architectural Record, p. 405).

Both Picasso and Braque continued to experiment with their new cubist vocabularies, working both independently and in tandem. Between 1910 and 1911 their work acutely reveals their close collaboration. In August, 1911 Braque traveled to Ceret, a small town in the Pyrenées, to join the vacationing Picasso. During this summer, the two artists continually incited each other to ever more radical explorations of cubism. Braque explained his mission, stating "there is a temperature at which iron becomes malleable and loses the sense of itself. That is the kind of temperature I search for. A picture is made up of disaffected objects" (J. Russell, Braque, New York, 1959, p. 16).

The artistic brinkmanship of that summer, resulting in the birth of Cubism, is undoubtedly a seminal event in the history of modern art. La Tasse is a work that exemplifies the power of that moment. Here, as in all his finest works, Braque concentrates more on the elaborate relationship between the objects than on the depiction of the objects themselves. Invoked by a complex series of bisecting lines, glimpses of form and interplay of light and shade, the geometry of this picture can be read simultaneously as infinite and cinematic. All form breaks down to the spatial relationships, compression and dynamism of the vertical, horizontal and diagonal lines. Braque has found his "malleable iron." La Tasse, the work of an artist at the peak of both his perception and his craft, expresses tremendous intellectual spirit and fully embodies the essence of the Cubist revolution.