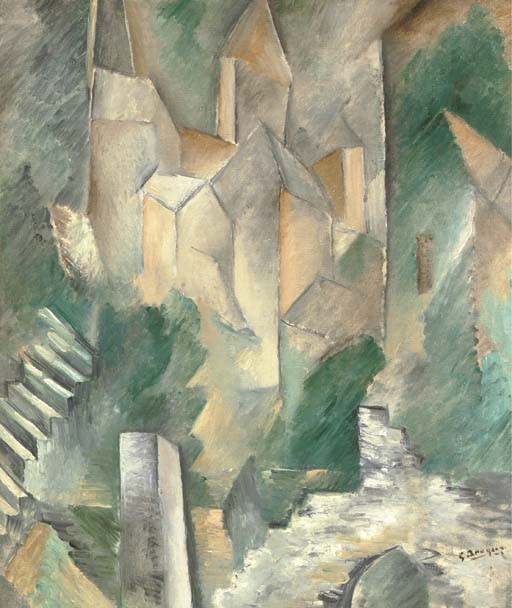 Galerie Kahnweiler, Paris; sale, second Kahnweiler sale, Hôtel Drouot, Paris, 17-18 November 1921, lot 18.
M. Netter, by whom acquired at the above sale.
Galerie Daniel Malingue, Paris.
Acquired from the above by the father of the present owner.

This work has be requested for the forthcoming exhibition Georges Braque et le paysage: De l'Estaque à Varengeville 1906-1963 at the Musée Cantini, Marseille from 30th June to 1st October 2006.

Painted in 1909, L'église de Carrières Saint-Denis dates from the very dawn of Cubism. It is in the late landscapes of Braque's transitional period that the bare bones of the movement truly consolidated. Now, he had surpassed Cézanne in rendering form in two dimensions, and he needed only his return to Paris and his subsequent friendship and collaboration with Picasso for full-blown Cubism to be born.

Braque's most important artistic developments took place in the years leading up to the painting of L'église de Carrières Saint-Denis. Despite having been an accomplished Fauve artist, he went through a second formative period, and it was in his landscapes that he made the greatest progress. The importance of the early landscapes such as this is reflected in the fact that, the year before this picture was painted, the critic Louis Vauxcelles had discussed similar Braque landscapes: 'M. Braque is an exceedingly bold young man... He despises form and reduces everything, landscapes and figures and houses, to geometrical patterns, to cubes' (L. Vauxcelles, quoted in E. Mullins, The Art of Georges Braque, New York, 1968, p. 44). It is an enduring irony that his slightly condescending words would end up coining the word 'Cubism'.

L'église de Carrières Saint-Denis reveals the speed with which Braque had capitalised on the lessons he learnt from Cézanne's paintings. The year after the Master of Aix had died, a huge posthumous retrospective had been organised. Thus in 1907, many of the young and avant-garde artists of the day, who had been only vaguely aware of Cézanne's works, had epiphanies when confronted with his extensive and masterly explorations of form in oils and on paper. The influence of Gauguin and Van Gogh which had been felt throughout the Fauves and the Expressionists was supplanted by the dramatic, and more profound, questions that were raised by Cézanne's painting. His interest had been not in channelling his feelings and experiences through the rich use of his oils, but instead in developing a visual language that conveyed a sense of volume and of three-dimensionality despite the two-dimensional nature of the medium. He sought something richer than the simple trompe-l'oeil or imitation of nature.

It was in his landscapes that Cézanne had explored these issues, and this was the format that Braque also took. Even after his initial viewing of ten Cézanne pictures exhibited in 1906, just after the older master's death, Braque had taken off for L'Estaque, a landscape which had rich associations with Cézanne, who had immortalised it in his works. The steady development of Braque's art can be seen in some of his L'Estaque paintings, which begin as Fauve images with an increased sense of structure and end as multi-faceted, crystalline forms that perfectly harness the interplay between buildings, trees and landscape. This evolution is visible in the comparison between the Fauve landscapes he created there in 1906, the transitional ones, for instance Viaduc à L'Estaque from early 1908 that is in the Centre Georges Pompidou, and then finally the 1910 picture of Les usines de Rio-Tinto à L'Estaque, also in the Pompidou. By extension, this same process of development also filled and fuelled Braque's landscapes in other parts of France. Indeed, L'église de Carrières Saint-Denis depicts a scene near Chatou and marks the culmination of Braque's transitional, proto-Cubist period. Only a short time after this work was painted, Braque would forsake the landscapes in which he had made so much progress and would focus instead on still life and portraits. He would only rarely, and decades later, return to the landscape after this. Thus L'église de Carrières Saint-Denis is an exceptionally rare work in showcasing the state of Braque's avant-garde vision just before its incredible transformation with Cubism. It marks the final culmination of his development, of his growth and of his maturity as an artist.

Suffused with a gentle light, L'église de Carrières Saint-Denis shows Braque's interest in form, but also reveals his deft ability with colour. The light in this picture and the deliberately muted shades that form the buildings show a mature and understated evolution of the colourism that had driven so much of his earlier Fauve period works. This is particularly apt as it was with his old friend Derain Braque stayed at Carrières Saint-Denis. There, he painted only a handful of works, of which two others are in the Thyssen-Bornemisza Collection and the Pompidou. However, these pictures show that the art that Braque was producing was now completely different to that of his fellow Fauve - indeed, only a couple of years earlier Derain had written to other Fauve artists voicing his concern at the alarming developments in his friend's paintings. In a letter to Vlaminck in 1907, he had written of Braque and Friesz that, 'Their idea is young and to them seems new; they'll get over it. There are other things than that to be done' (Derain, letter to Vlaminck, quoted in W. Rubin, Picasso and Braque: Pioneering Cubism, exh.cat., New York, 1989, p. 344). Now the idea had taken greater form, in part through Derain's own hospitality.

It was just after L'église de Carrières Saint-Denis was painted that Braque and Picasso embarked on the full-blown adventure of Cubism. The similarity in the paths that they had chosen was already clear, as is shown in the paintings that Picasso had almost simultaneously been painting in Horta. The two artists were pursuing similar goals from different angles. Picasso's interest in Cézanne was less focussed than Braque's, and was supplemented by an interest in African and Oceanic art. The fact that the two artists sought similar goals through different means was to have an impact even on Braque's transitional works. This came about in a roundabout way, through the legendary dealer Daniel-Henri Kahnweiler. It was through Kahnweiler that Braque was introduced to the poet Guillaume Apollinaire, who in turn took the painter to the studio of his friend Pablo Picasso. There, the Spanish painter was at work on his masterpiece, Les Demoiselles d'Avignon. Braque was shocked, yet completely enthralled. What he saw in Picasso's masterpiece-in-progress he could not ignore, and it was in a sense this work that liberated him, that gave him the confidence to embark on his extensive exploration of a means of capturing form on canvas.

Kahnweiler's indirect influence on Braque in bringing about his minor revelation in Picasso's studio was later surpassed by his role as the godfather of Cubism. For it was Kahnweiler, through whose hands L'église de Carrières Saint-Denis passed, who organised the first exhibitions of Braque and Picasso, as well as all the early exhibitions of Cubism. L'église de Carrières Saint-Denis is therefore an important painting from one of the highpoints of Braque's career, one of the last and most fully developed of his transitional paintings, and a testimony to the various characters who formed the avant-garde of the time, and who would shake up the entire history and development of modern art.