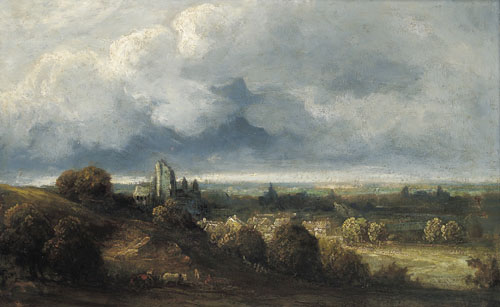 Provenance: West German private collection
In his beginnings, Georges Michel used to paint landscapes complying with the taste of the 18th century. Quite soon, however, he got to consider them as "artificial, useless and insignificant". Hence, he drew his inspirations exclusively from the major Dutch landscape artists of the 17th century, his great model being Jacob van Ruisdael. He found his motifs in the surroundings of Paris, especially on Monmartre, which still resembled a rural area in those days, and was referred to as "Ruisdael of Montmartre". The present painting also reveals an influence of Hercules Seghers, an important Dutch landscape painter whose impressionistic treatment of light had already influenced Rembrandt and Philips Koninck. Unlike his predecessors Michel was one of the first plein-air painters. He is considered not only a forerunner of the School of Barbizon, but also of modern landscape painting in general. Only few of his paintings were sold, and he died in poverty.
Certificate: Willem van de Watering, 27 July 2004, as autograph and characteristic work by Michel. According to Watering, Michel rarely signed his works. The signature in the present work resembles that on the reverse of a painting representing the mills of Orgemont, mentioned and reproduced in: Yane Fromrich, “Georges Michel: sa vraie place”, Connaissance des arts, no. 186 (1967), p. 56. The artist was duly recognised only after his death, when he was highly appreciated by the painters of Barbizon. In the course of the 19th century his works became extremely popular, in particular in the United States. Also the Netherlandish marine painter and wealthy banker Hendrik Willem Mesdag (1831 - 1915) acquired no less than four of Michel's paintings for his renowned collection (now in the Mesdag Museum in The Hague).