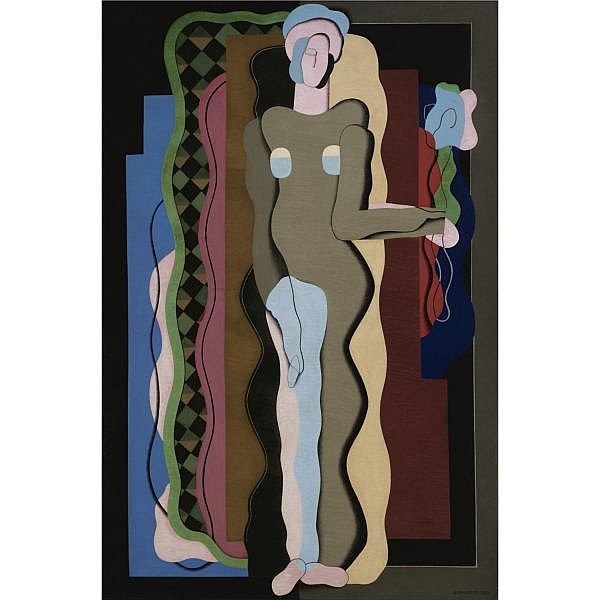 (possibly) Galerie L'Effort Moderne (Léonce Rosenberg), ParisSale: Ader, Paris, June 21, 1978, lot 36Private Collection, France (acquired at the above sale)Acquired from the above by the present owner

Georges Valmier was one of the leading Cubist painters after World War I. In 1928, when he painted Nu à la Fleur, he was actively participating in various theatrical productions as a scenery and costume designer. Valmier's activity in the field of theater was consistent in style and ideas with his painting. This versatility was an expression of the artist's desire to create a truly popular art. Regarding his use of color, Valmier wrote: "With the current plastic expressions, color takes on its true meaning, its own life. Color is the substance which is destined to express the intellect" (Denise Bazetoux, Georges Valmier, Catalogue raisonné, Paris, 1993, p. 20). When Valmier painted this picture, he was under contract with the famous dealer Léonce Rosenberg, whose gallery L'Effort Moderne was a lively cultural center where works were exhibited 'for the promotion of Cubism'. Following his first one-man show at Rosenberg's gallery in 1921, a contemporary critic made the following remarks about Valmier's innovative style: "Valmier perceives Cubism as the foundation of a new art, refined and stripped of the anecdote that the subject constitutes, and which, by its abstraction, becomes universal language" (Denise Bazetoux, op. cit., p. 25). In 1928, the year that he painted the present work, Valmier was asked to participate in the interior decoration of Rosenberg's apartment, and was commissioned to paint several canvases for his dining room. For this commission, Valmier worked with large-formatted canvases, similar in size to the present work. In this picture, the artist used a secondary color range, dominated by pink, blue and mauve, in contrast with the shades of black and grey used in the background. The modulated color planes complement each other, alternating between geometric and organic forms. Georges Pillement, a collector of Valmier's works, wrote: "The goal of the artist is not only to distract our eyes by spots of color and harmoniously arranged lines. He tries to express, behind the reality that we see, another reality, a surreality. He lets us penetrate into the domain of the invisible. His art is more an art of intuition than one of constructive intelligence, it is an art of mysticism that tries, behind human appearances, to probe the divine background whose molecules are scattered in us... He succeeded in giving his works such dynamism that they seem to be continually in movement, that the lines and the forms that we perceive continue to modify themselves following the laws of constant change which govern all beings and all of nature" (Denise Bazetoux, op. cit., pp. 29-30).