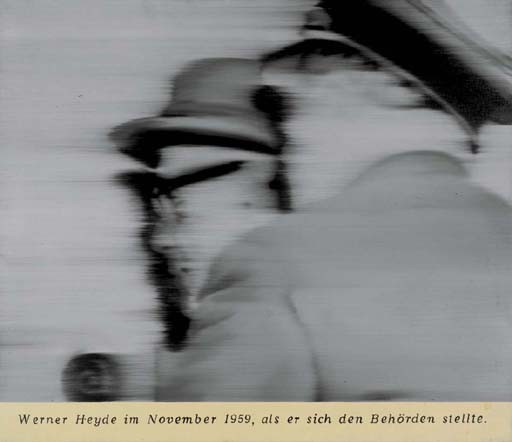 Rene Block Galerie, Berlin
Acquired from the above by the present owner

Deriving from the earliest phase of his mature career, Herr Heyde is a spectacular Photo Painting that embodies the essence of Gerhard Richter's oeuvre. In 1962, at the age of thirty, the artist adopted a definitive Post Modern posture to his work that rejected all ideology--political, spiritual and aesthetic--in order to embrace the multiplicity, simultaneity and flux of reality. Deciding to copy found black-and-white amateur and photojournalistic snapshots, which he regarded as having "no style, no concept, no judgment", he thereby circumvented the various ideologies attached to inherited and prevailing artistic movements and created his signature brand of aesthetic indifference.
In explaining his preference for ready-made photographs compared to the necessarily interpreted and therefore subjective view of painting, Richter has stated: "A picture presents itself as the Unmanageable, the Illogical, the Meaningless. It takes away our certainty, because it deprives a thing of its meaning and its name. It shows us the thing in all the manifold significance and infinite variety that precludes the emergence of any single meaning and view." Richter's Photo Paintings demonstrate the disruption between the image and its narrative; for instance Herr Heyde shows the back of a person in uniform in front of a profile of a man wearing a hat and glasses. Seemingly innocuous, even banal, one discovers the subject in the caption at the bottom of the painting.
Reading: "Werner Heyde in November 1959, as he gives himself up to the authorities," Richter's image uses a newspaper clipping of Professor Werner Heyde, one of the National Socialist regime's leading euthanasia doctors. After the War, Heyde had resumed life in Flensberg where he worked as a neurologist and court advisor under the persona of Dr. Fritz Sawade. Upon revelation of his true identity, he gave himself up to the police in Frankfurt am Main in 1959 and was immediately taken into custody. After four years of imprisonment while awaiting trial, he hung himself in his cell on February 13, 1964.
In the 1960s, Heyde had become the focus of wide discussion and trials against those holding high official positions in Flensburg who had covered for him provided further headlines. Yet, Richter demonstrates the dissonance between one's discovery of his subject and a purely visual apprehension of the image, which on its own has infinite possibilities. He heightens this ambiguity through his signature technique that degrades the image and makes his subject less recognizable. Replicating the black-and-white readymade picture by projecting it onto his canvas, tracing its exact form, and painting it in grisaille--thereby neutering his palette to shades of grey--Richter then instills the "blur" with the light touch of a soft brush or a hard smear of an aggressively pulled squeegee. The effect is to nullify the subject, to undermine its closure towards an exact definition. Images are thus rendered fragile illusions concealing the unseen and fleeting in the constant reshaping of reality. Additionally, the unfocused nature of these works, simultaneously mimicking the smooth finish of photographs and laying claim to the plastic qualities of paint, explore the boundaries between photography and painting. Photography's claim to objective reality and painting's inherently artificial interpretation of reality are duly challenged and the nebulous and malleable nature of reality is vetted.
Richter further undercuts the meaning of charged subject matter by alternating between an array of sources from family albums, newspapers and magazines and from subjects ranging from figures, objects and landscapes and depicting them in the exact manner without distinction for their beatific, benign or horrific content. For instance, Uncle Rudi, painted in the same year and in the same manner as Herr Heyde, depicting a smiling young soldier in Wehrmacht uniform could easily be associated with the perpetration of war crimes Nazi Germany especially when read in the context of Herr Heyde. However, the work is a posthumous painting from a family snapshot of Richter's eighteen-year-old uncle who died in the war while serving in Hitler's army. The tragic fate of the artist's innocent young relative is given no elucidation in the artist's signature grisaille out-of-focus photorealist rendering; indeed, no emotional or critical judgment or distinction is made between Richter's depiction of his uncle and that of Heyde. The artist thus emphasizes that the significance of his work lies in its deliberate uncertainty.
However, despite Richter's claims that the subjects of his paintings had no relevance but for their lack of composition and artistry, the implications of Herr Heyde cannot be easily dismissed. Born in Dresden in 1932, the artist was inevitably exposed to the horrors of the War through the death of two of his uncles and that of an institutionalized aunt who was one of hundreds of Nazi euthanasia victims. Created at a time when Germany was coming to terms with its troubled past, the objective distance and deliberate anonymity of Herr Heyde seems to pick the nation's fragile moral fiber. Many years after the early Photo Paintings, Richter acknowledged the care with which he chose his photographs stating that he was "very definitely concerned with content. Perhaps I denied that earlier, when I maintained that it had nothing to do with content, that for me it was only a matter of painting a photo and demonstrating indifference....I looked for photos that showed my actuality, that related to me." (cited in "Interview with Benjamin Buchloch," Gerhard Richter: Paintings, London 1988, p. 20). Painting a euthanasia doctor when his aunt had died in the hands of one is poignant; yet, Richter's near-erasure of the subject suggests that reality is subjective and therefore infinite in its incarnations and that even the most horrific of realities fades if only to birth new ones.
It is without doubt that Herr Heyde occupies a place of seminal importance in the Richter's career and personal history while also embodying one of the unspoken tragedies of World War II. The work fruitfully explicates the artist's investigation of the nature of reality through the frequent disparity between form and content in pictorial representation.