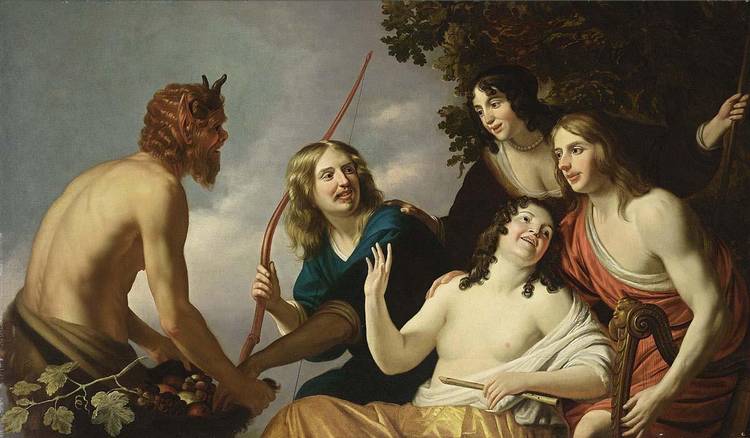 THE PROPERTY OF A LADY AND A GENTLEMAN

Before restoration and on the basis of photographs, this painting was identified in the late 1950s or early 1960s by Gerson, Gudlaugsson, and Judson as by Gerrit van Honthorst and dating from the 1640s. In 1987/8 the then cleaned and restored painting was thoroughly examined by Professor Leonard Slatkes, who confirmed this opinion and dated the work to the late 1630s (letter of 24 August 1988). Judson, however, subsequently revised his earlier opinion, after observing the painting in its restored state (see under Literature below).

Although Judson is of the opinion that the paint surface as it is now bears no resemblance to Honthorst's manner of painting, he clearly sees a connection with other compositions by the artist, such as a Shepherd and shepherdesses, dated 1632, on loan to the Muiderslot, Muiden (idem, p. 171, cat. no. 211, reproduced plate 110), to which it shows close resemblance. Furthermore it can also be compared with Diana resting with two shepherdesses and two greyhounds, in the collection of Saul P. Steinberg, New York, which Judson dates between 1627 and 1632 (idem, p. 113, cat. no. 107, reproduced plate 48). This makes a date of execution of circa 1632 for this painting plausible. Van Honthorst's work was much in demand and in the 1630s it was usual for him to delegate much of his output to his large workshop or studio. It may therefore be argued that the present work originates from the artist, but is finished for a large part by his studio.

Throughout his career Van Honthorst had a strong connection with the nobility in The Hague, which also led to commissions from the royal family in London and elsewhere. He frequently painted mythological and historical scenes, portraits, and also portraits of court members disguised as Arcadian and mythological personages, a long standing European tradition. It thus seems plausible that the figures on this painting are also likenesses of European nobility members. In the opinion of Professor Leonard Slatkes the figures on this painting represent the children of Frederik V of the Palatinate, the exiled King of Bohemia, and his consort, Elizabeth Stuart. They and their family were guests of the Royal Court at The Hague in the 1620s and early 1630s, and were, after their host, the Prince of Orange, Van Honthorst's most enthusiastic patrons. Slatkes motivates this identification by pointing out the individual figures and comparing it to known portraits. The male figure at the right in that case is then likely to be Ruprecht, Prince of the Palatinate (1619-1683). He holds a harp, the attribute of Apollo, patron of the arts, and this was probably intended as a reference to his own artistic interests. The second male figure, holding a bow, the attribute of a hunter, would then be Ruprecht's elder brother, Karl I Ludwig von der Pfalz (1617-80), later Elector of the Palatinate. The standing female sitter holding a staff may be Luise Hollandine (1622-1709), while the seated flute-player below may perhaps be Elizabeth. This particular identification of the figures in the painting has however has been rejected by Judson.