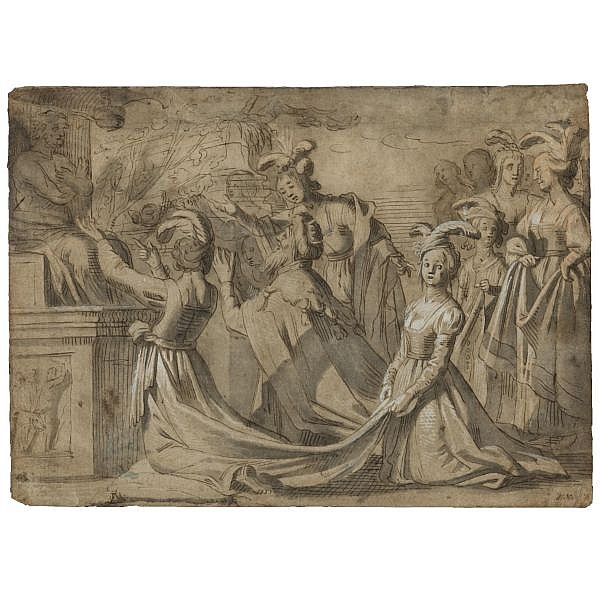 Honthorst's drawing style owes much to his Utrecht origins. He studied there, from around 1606, with Abraham Bloemaert, and must also have been extremely familiar with the work of Joachim Wtewael, whose influence is particularly evident in the present drawing. Like several other Utrecht artists of his time, Honthorst travelled to Italy to further his training, and was greatly impressed by the innovative works by Caravaggio and his followers that he saw there. His Italian journey seems to have begun around 1613, and having gained a considerable reputation - not to mention a nickname, Gherardo della notte, that reflected his approach to composition, and the patronage of Marchese Vincenzo Giustiniani, Cardinal Scipione Borghese and Cosimo II, Grand Duke of Tuscany - he returned home to Utrecht in 1620.υ1 Honthorst's professional success continued unabated, and during the 1620s he established a thriving studio in Utrecht, which even attracted the attention of Rubens, who came to visit in 1627. The artist was also in demand abroad. In 1628, he travelled to London to paint the famous King Charles I and Queen Henrietta Maria as Apollo and Diana (Hampton Court), a work that set the scene both for Van Dyck's allegorical portraits of the English nobility, and for Honthorst's own subsequent wall and ceiling paintings, incorporating such flattering allegories. Such images were in great demand at the courts of Europe, and consequently, so was Honthorst. In 1630 he became court painter to the King and Queen of Bohemia (then resident in The Hague), and was mentioned by Constantijn Huygens, the secretary to the Stadholder Frederik Hendrik, as one of the most important history painters in the Netherlands. Five years later, the international appeal of his work was confirmed, when he received the first of a number of extremely important commissions from King Christian IV of Denmark, for his castle at Kronborg. Abraham Bloemaert - teacher not only of Honthorst but also of that other leading Utrecht Caravaggist, Hendrick Terbrugghen - was a prolific draughtsman, and clearly instructed his pupils in the art of drawing, but studies by all the artists in this group remain rather rare. Honthorst appears to have drawn more than many of his colleagues, but even so, Judson and Ekkart's catalogue raisonné lists only 58 surviving drawings. A few more have subsequently appeared, such as the recently identified Prophetess of Good Fortune (acquired by the Louvre in 2006υ2), but hardly any substantial drawings by the artist remain in private hands, so the present work is a very important discovery. This powerful, boldly drawn image represents the episode from the Book of Kings (1:11) when Solomon is led astray by some of his new wives (he is supposed to have had 700), who encourage him to worship false idols. The drama of the story is enhanced by Honthorst's strong sense of chiaroscuro, and also by the typically theatrical device of the kneeling foreground figure who looks out at the viewer; is she questioning whether they are doing the right thing, or is she inviting the unseen viewer to join in the worship? The drawing must have been made in connection with a painting - either as a finished modello or as a ricordo - but no related painting is known today. Stylistically, though, the unidentified painting to which this drawing relates must have resembled grandiose works of the mid-1620s, such as the Solon before Croesus (1624, Hamburg, Kunsthalle)υ3, and the drawing style is also consistent with works of that period, or perhaps very slightly later, around the time of the artist's journey to England in 1628. Indeed, one of the most similar to this amongst Honthorst's other surviving drawings is the large, finished compositional drawing for the Hampton Court Charles I and Henrietta Maria as Apollo and Diana.υ4 Another comparable work is what Judson refers to as "an advanced study" for a painting of Diana on the Hunt; the picture is now lost, but was signed and dated 1627.υ5 All these three drawings are different in style from the handful of securely datable drawings from later in the artist's career, notably the studies for his Kronborg Castle compositions of 1637 and thereafter,υ6 drawings that are in some ways more fluidly executed, but very much less theatrical and visually striking. It is therefore reasonable to conclude that this large and rare sheet is a record of an otherwise unknown but important painting, conceived by Honthorst, though perhaps never executed, during the second half of the 1620s, a time when he was at the peak of his creative powers. The most substantial and important drawing by the artist to appear on the market in recent times, this impressive sheet illustrates very clearly the imagination, narrative ability and technical skill that resulted in Honthorst's work being in such great demand throughout Europe. 1. This account of Honthorst's life and career is derived from J.R. Judson and R.E.O. Ekkart's monographic study, Gerrit van Honthorst, Doornspijk 1999, passim 2. Inv. No. 54429 3. Judson and Ekkart, op. cit., cat. no. 137, reproduced pl. X 4. Rotterdam, Boijmans Van Beuningen Museum; Judson and Ekkart, op. cit., cat. no. D 18 5. Location unknown; Judson and Ekkart, op. cit., cat. no. D 19 6. E.g. Judson and Ekkart, op. cit., cat. nos. D 33, D 37, D 39